Trump’s first week in office comes to a close 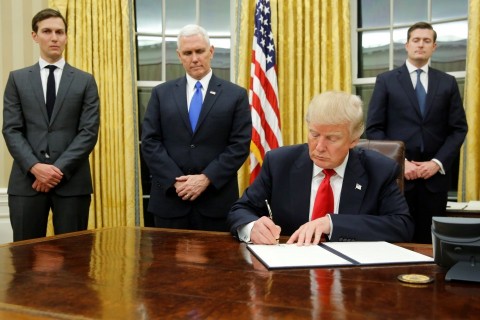 As the first week of the Trump Administration comes to a close, it seems fit to go back and analyze his first days in office. This first week has been a bit difficult on the new president.

Trump’s difficult week began on Saturday, only a day after the inauguration. The Trump Administration, specifically the new White House Press Secretary, Sean Spicer, were under fire after Spicer made the claim that Trump’s inaugural crowds were the largest ever. This is a claim that has widely been debunked by pictures and train travel records. This was Spicer’s first conference as Press Secretary, and due to his upfront lie, many have already begun to lose trust in the Trump administration.

However this was not the end of Trump’s trouble with the claims from his Press Secretary. On Sunday,  Kelly Conway, Trump’s former campaign manager and current advisor, made the situation worse. When asked on Meet the Press to respond to the false claims that Spicer had made, she responded by saying Spicer used, “alternative facts.” This caused a huge amount of backlash on social media and by people across the country. After only two full days of being in power, the Trump administration had begun to lose their credibility, and fast.

However, while Spicer was giving “alternative facts” on Saturday, millions across the country marched in the Women’s March. The Women’s March was organized in with the goal of holding the president accountable for his behaviors and making sure women will have fair treatment during the Trump presidency. There were protests in all 50 states, making the Women’s March the largest protest ever to be staged in the United States. Furthermore, all 7 continents had demonstrations of some sort to protest for the same reasons. Trump reacted to the Women’s March in a tweet which read, “Watched protests yesterday but was under the impression that we just had an election! Why didn’t these people vote? Celebs hurt cause badly.” He seems to have played down the significance of the March by turning attention away from the issues and on to himself.

After a rough weekend, the Trump administration needed a break from the constant criticism; however, the week would not be the break they needed.

The first major issue Trump caused during his first week in office was to enflame tensions between the United States and Mexico, the biggest cause of tension being his wall. The wall was one of the major keystones of the Trump campaign. During the primaries, Trump said that Mexico would pay for a wall that would span the entire US/Mexico border, its sole purpose being to keep out the flow of illegal immigrants coming to the US from Mexico. This week, Trump put his first idea to get the wall built forward, which is a plan to create a 20% tax on all imports coming from Mexico. Mexican President Enrique Peña Nieto released a statement saying that Mexico “demands respect” from the United States and then proceeded to cancel a visit to Washington, scheduled for the next week. Our friends south of the border also responded by protesting Trump and boycotting some US made goods. However, Trump made more people than just Mexicans mad this week; a whole different section of the country is now beginning to stand up for the facts.

The next problematic thing Trump did during the week was reauthorize the construction of the Dakota Access and Keystone XL pipelines, while at the same time banning the National Park Service, Environmental Protection Agency, and NASA from releasing any form of media. The response has been swift and decisive against Trump. The Standing Rock Tribe in North Dakota has threatened a court case against the Dakota Access Pipeline and Trump administration. The protesters there say they are there to stay. There is also talk that scientists will plan another march on Washington, similar to the Women’s March. Many scientists who worked in the National Park Service and NASA ignored Trump’s ban. There have been several alternative National Park Service and NASA twitter accounts posting about global warming, climate change, and the validity of science.

To close off his first week, Trump signed an executive order that banned people from seven middle eastern countries from entering the US: Iran, Syria, Libya, Somalia, Iraq, Yemen, and Sudan. At first, there was little news coverage regarding this particular executive order. However as Trump’s first week moved into its second, that began to change. The first major protest regarding the ban occurred in New York’s JFK airport where several muslim individuals were held in custody after leaving the aircraft which had come from the middle east. As the day progressed, similar protests erupted in nearly all of the US’s major airports. The protests triggered a court decision that temporarily stopped Trump’s ban from taking effect, due to a 1965 law stating that immigration to the US can’t be banned based on an individual’s country of origin. During Trump’s campaign, Speaker of the House Paul Ryan (R-Wis) and even Trump’s future running mate, then Governor of Indiana Mike Pence, both stated that they would not support a ban on muslims from entering the country. It has yet to be seen whether Congress will contradict Trump on this, but the American people will continue to protest as long as they see a reason.

Trump’s approval rating is historically low for it being so early in his first term. The Trump administration has had a rough first week, and looks like they’re in for more.