A shift in substance abuse: vaping rises to the top 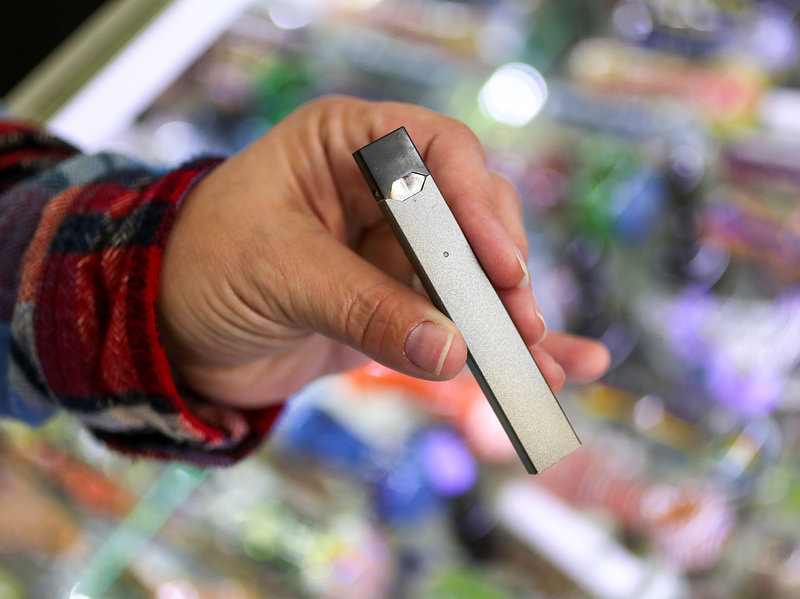 JUUL e-cigarettes are sleek devices and easy to conceal, which makes them popular with teenagers.

As the first half of the school year comes to a close, York, like many other high schools across the country, is in the midst of a new chapter of substance abuse: vaping. The general issue of substance abuse is nothing new–in fact, in the 1975 York yearbook there were two pages dedicated to substance abuse with the title, “Is all of York High?” This year, though, the problem is progressing into new territory due to the popularity of vape pens and other vaping devices.

According to the Chicago Tribune, vape pens originated as e-cigarettes, which were designed by tobacco companies in order to provide a healthier version of cigarettes. E-cigarettes were initially marketed to former smokers who were struggling to stop using cigarettes; however, as teens began using e-cigarettes, many companies created vape pens, which were e-cigarettes with teenage marketed designs. The access to and nondescript nature of vaping devices have caused vaping to explode recently, and now the popularity has hit York.

“It is something [vaping] that is known to be detrimental to a student’s health,” said Mrs. Melissa Moore, assistant principal of student services. “Even if it is not a vape with an illegal substance in it, vaping in and of itself is detrimental to students health because of the inhaling of metal particles.”

Despite the administration’s actions to secure a drug-free environment, the new popularity of vaping has caused a significant increase in disciplinary infractions. As shown in the chart below, this year (based on the data from the past decade) the number of disciplinary infractions is on track to be far higher than any other year. Although the rising number of infractions suggests a problem, a student survey indicates the problem is much larger than the administration’s numbers suggest. In an anonymous survey that was administered to 799 students, nearly 80% of students responded that they knew somebody who has taken some form of an illegal substance or used paraphernalia on school property–which leaves the question, why is there such a disconnect between what people see and the disciplinary numbers? 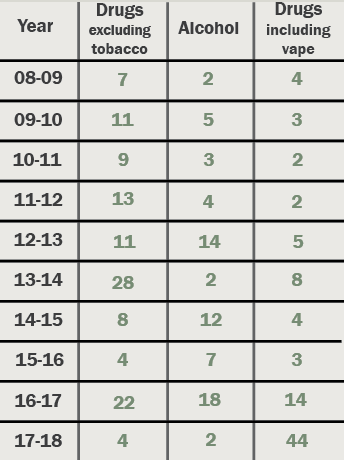 Students may have responded to the survey that they believe a problem exists because it feels like there should be based on the stereotypes of high schoolers. However, the numbers provided by the administration may be lower than the reality for several reasons. First, in order for a disciplinary action to be taken, school administrators have to be completely certain that a student is either
in possession, using, or selling drugs on school property based on evidence compiled through an administrative investigation. Also, not all cases are caught by the administration, in large part due to the student to faculty ratio.

“We have a lot of avenues to understand what is happening, so we can keep a safe environment,” Moore said.“For example, the deans and other teachers who float around the building during their free periods…try to help prevent usage, but if there are students in a location where they are not supposed to be, and there is no adult around, there is no way for us to know it is happening, unless everybody feels responsible for preventing further drug use by informing the administration of usage.”

It is here that the rumors and perception of high school mentioned earlier come into play. Both of these seem to create their own reality for students about the scope of illegal substance abuse without being based on hard facts. But, as Mrs. Bonnie Salvo, one of York’s social workers explains, we also paint the wrong image of substance abuse when we talk about it.

“We don’t hear from the people that are making good choices because they quietly do what they are supposed to do,” Salvo said. “Instead we tend to focus on the students that have problems.”

So, when we talk about substance abuse, we only talk about it when something is going wrong, and thus, it makes substance abuse seem more prevalent than it really is. Now, although the administration’s and survey data are inconclusive, they show that the number of students using illegal substances is less than students currently believe. One possible reason for this is the atmosphere; over 60% of sampled students believe they are surrounded by substance abuse.

One of the junior respondents stated that, “Having a hall monitor stand just inside the bathroom doors [may help reduce usage] because it’s in the bathrooms before classes that the vaping goes on. It’s a ridiculous amount of people who do it.”

This perception is not only around York though. In an NPR story published on December 4, the story quoted a highschool girl who, when asked how many of her friends use vape, she responded, “I wanna say like 50 or 60 percent.” The story also showed several tweets made by students that suggest social media may also play a role in the number of students who say they know someone who uses illegal substances.

Detective Nick Waldenmeyer, another of the school’s police liaisons, points out the influence social media has on students’ perceptions.

“If students are logging into social media and seeing pictures and videos of vaping, it plays into the narrative that everybody vapes,” Waldenmeyer said. “If a student who doesn’t use vape sees all of these other students vaping through social media, it makes it seem like more people are doing it, because of the trensetting power of social media.”

So, as the school year reaches the halfway mark, now is the time to reflect on the true scope of the issue of illegal substance and paraphernalia use at school. It is the hope that the data presented in this article can help readers make educated statements about the scope of the situation, and also to encourage readers to discuss solutions on how to put the trend of vaping into the dustbin of history.