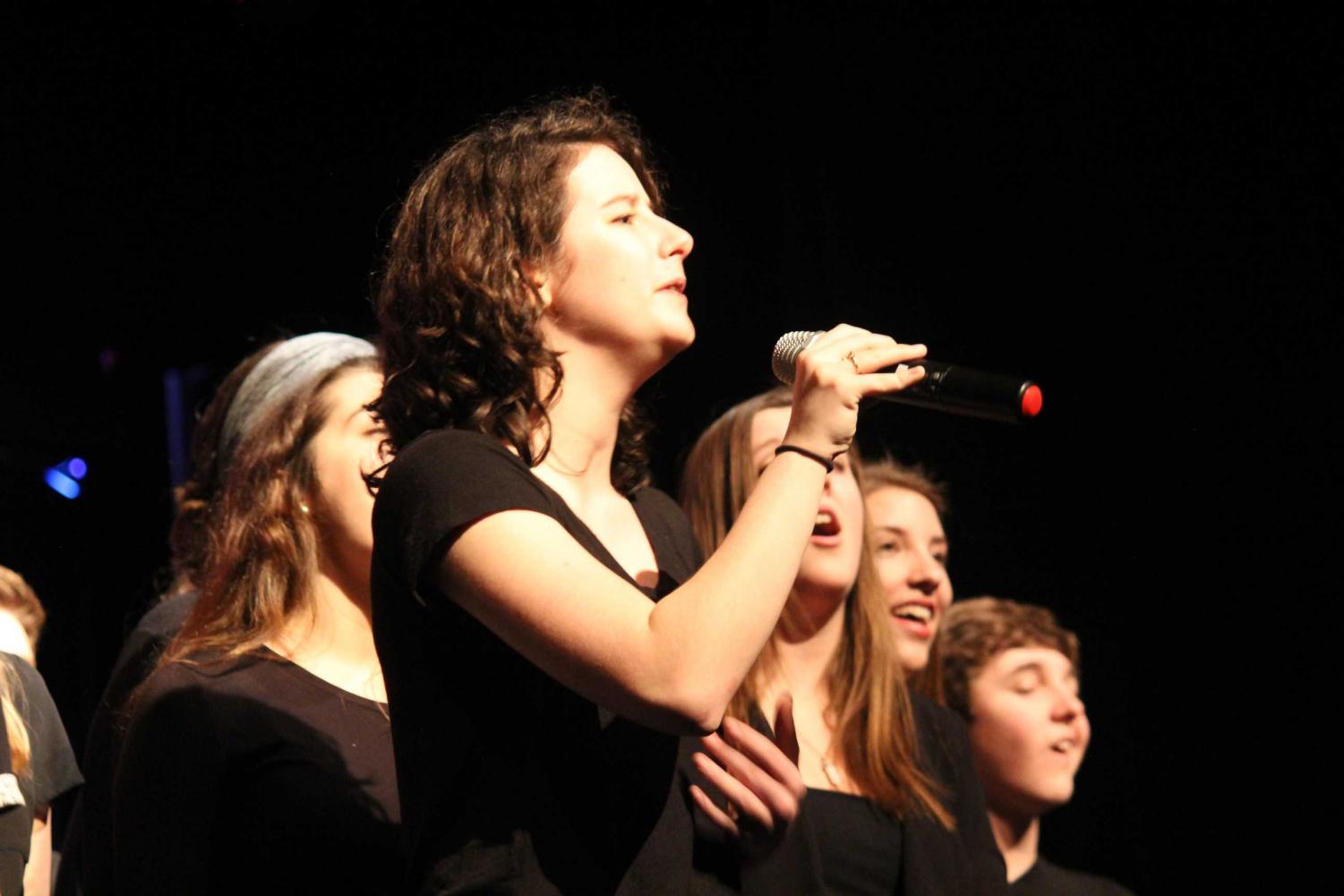 Along with performing her own song, “Eggshells,” Buckley was the soloist during a cappella choir’s 2017 talent show performance.

Along with performing her own song, “Eggshells,” Buckley was the soloist during a cappella choir’s 2017 talent show performance.

Under the Monocle: Madds Buckley, woman of many hats (and kazoos)

The bell rings for fifth period to begin and Madds Buckley excitedly runs around the choir room accepting hugs and congratulations from her peers. While today, Dec. 18 is a normal, even stressful, Monday with finals on the near horizon for most students, Buckley can barely contain her smile – but that’s how you would expect someone to act when they’ve just found out they were accepted into their dream college.

Last summer, Buckley attended a program at Berklee College, a nationally renowned college for aspiring artists of all kinds. During the five week period she worked with other passionate songwriters and composers to hone her craft, as well as encouraging faculty who helped her delve further into her dream career.

“Every single person working at Berklee is so good at what they do,” Buckley said. “I got to work with Melissa Ferrick – a really great singer songwriter who’s collaborated with a ton of the greats. I only met her for a bit, but she helped me edit “Eggshells”… She really liked that song, so it was a blast to have her input on it.”

“Eggshells” is a song that Buckley performed in last years talent show that can be found on the Amateur Musicians album “Music as One”. She’s been heavily involved with the club since her freshman year, and this year helped to produce the second annual Christmas album “Green & White Christmas”.

“For “O Holy Night” she, on the spot, created accompaniment for me, because my CD wasn’t working,” said senior Katharine Bartosz, who’s featured in two songs on the album. “She is so kind, patient, and musically gifted and I’m proud to call her my friend.”

This isn’t the first album she’s produced – she also has a solo album titled “Too Afraid to Say It” that she released this April that features 13 of her songs.

“It took me way too long to get it out,” Buckley said. “My album was something I poured everything into, and it’s a collection of my experiences I had during my sophomore and junior years – as most good art is!”

Songwriting isn’t the only art Buckley is passionate about – she’s also a talented actress who starred in the fall production of “The Children’s Hour” this year along with participating in drama throughout her high school career: another notable role of hers is Anybodys in the state winning production of West Side Story.

‘Drama has helped me develop my style as a writer,” Buckley said. “I want to write songs about stories, or moving through or within moments in life – it makes the song more relatable and enjoyable when they have progression within themselves.”

While she’s participated in many clubs and activities in her four years, such as drama, Madrigals (an extracurricular a capella choir), jazz band, and Invite to Teach, her main passion is songwriting.

Composer and lyricist of the spring musical Tuck Everlasting, Chris Miller and Nathan Tysen, visited the school to help the cast connect with their show but also listened to a musical theater piece that Madds prepared for them. They were extremely impressed by the young songwriter, and gave her some tips that she hopes to employ when writing future musical theater compositions.

With all the training, mentorship, and advice she’s received throughout her four years at York, her teachers and peers are looking to see Madds’ name all over the music world in years to come.

“Madds is one of the most prolific songwriters that I know of any age,” said Amateur Musicians club sponsor Chris Gemkow. “Not only does she write several songs over a short period of time, she writes great songs with thoughtful lyrics, colorful harmonies, and interesting arrangements – every musical detail is thought through.”