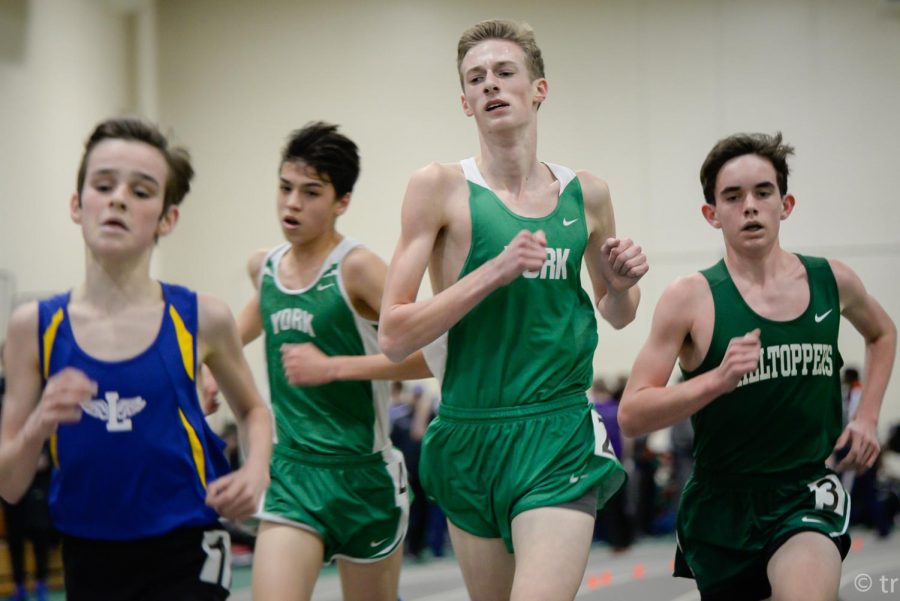 On Friday, Mar. 16, the York Boys Track Team competed in the varsity and sophomore level conference meets. The varsity team took sixth and the sophomore team won the conference title, so overall it was a great night for the Dukes.

“I can’t even comment on how many great performances there were during the last two days,” head coach Charlie Kern said. “The meet was such a magical time with forever moment after forever moment for me and so many kids on the team.”

The Duke’s success on Friday can be attributed to the many great performances that occurred in the meet. On the sophomore side, athletes continuously placed exceptionally well with many first and second places.

“We saw some really good things on the jump side of things,” said Ben Sharko, head jump coach. “We saw guys go out and compete really well. In the past two weeks, we saw some new guys come out to jump and they helped the team score points early on in the meet.”

“I was really happy with the performances at the varsity conference and the freshmen and sophomore conferences,” said Reed Sundberg, head spring coach. “As a sprint crew, we’re just going to keep getting better.”

“It was awesome to watch kids make the conscious decision to find out how good they can be,” Kern said. “Many achieved that–not everybody did, but the valiant effort that was put forward was inspiring.”

Now that the indoor season has come to a close, the team heads into the outdoor season which brings new excitement and possibilities.

“We have some guys who were out, but have just been cleared to run and haven’t run in the meets yet, so we’re just adding more as we go into outdoor,” Sundberg said. “We also have the opportunity to run more races outside because we have the 100-meter dash and the four by one relay.”

In addition to the 100 and 400-meter relay, the outdoor season also adds the 300-meter intermediate hurdles and discus, giving more athletes chances to get better and score in future meets. So with the team’s first outdoor meet on Apr. 4 and state only two months away, their season is ramping up quickly, but the boys will take it head on.