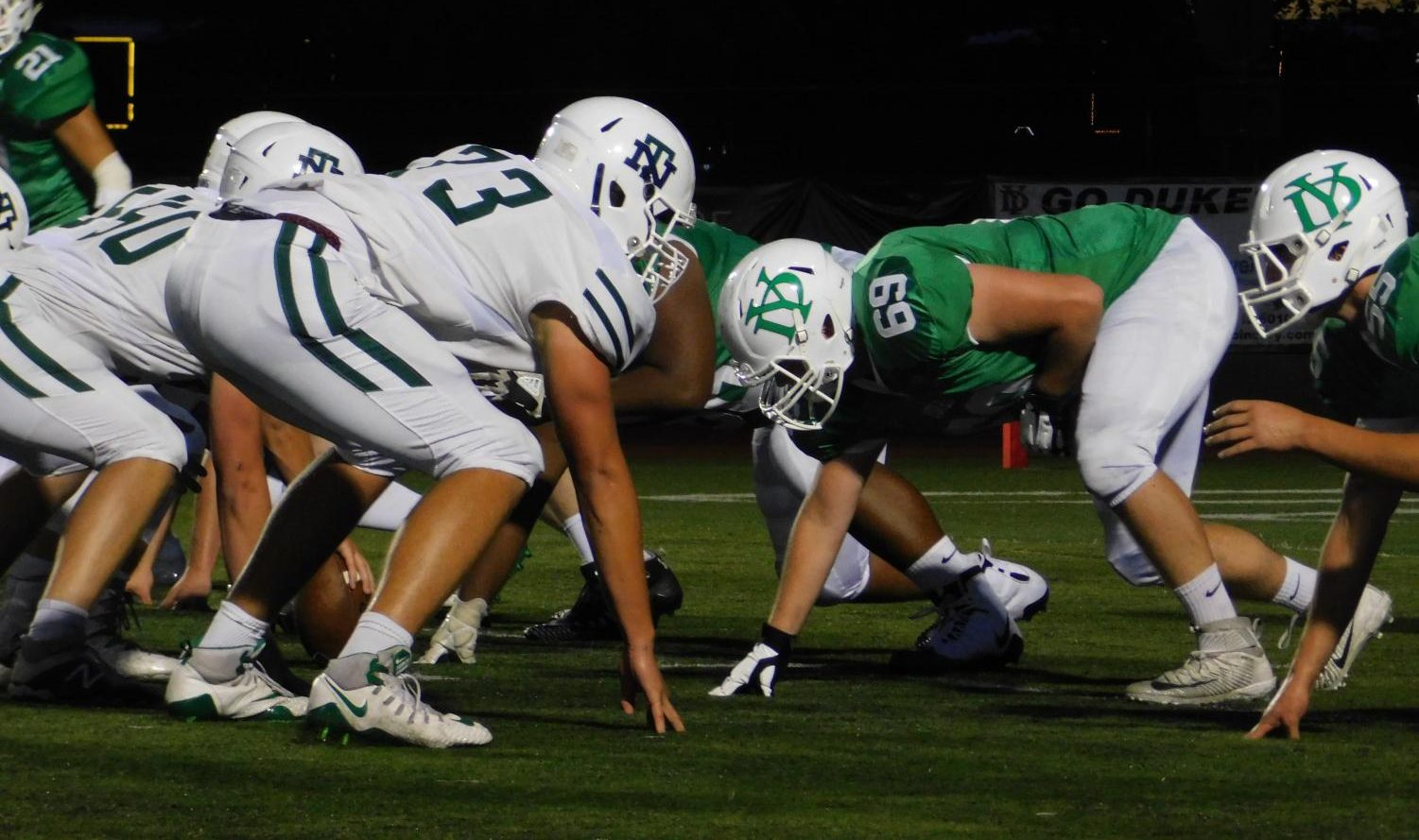 The York football players get ready to tackle New Trier.

It’s Friday night, and bright lights beat down on the football field. Even with the cold mist that blows through the stadium, students pack the stands in their red white and blue gear, new drum majors take the lead, and York’s Varsity Football Team charges onto their home field in their classic green and white gear. With a new season, a new coach, and new teammates, the team took on New Trier, finishing the game with a score of 13-21.

“Going out Friday nights and watching your friends play under the lights in that environment is awesome,” senior Ryan Ross said. “It gets everyone excited.”

With 3:31 on the clock in the first quarter, New Trier scored a touchdown that set the score 7-0 for the opposing team. However, the Dukes came back in the second quarter with a touchdown by senior Kevon Robinson.

The final score came to 21-13, with Tyrone Birmingham Jr. making a second touchdown for the team in the third quarter. Although the team hoped for a win, they’re proud of their teammates and look forward to the games that will follow.

“I felt that we had a good build up going, especially being well prepared by our coaches, as well as working hard all week leading up to it,” senior Ben Mellion said. “I feel that we played a great game; we just had some missed assignments that made a big difference in the game. But overall, I’m very encouraged about the rest of the season.”

In the stands, patriotic York students cheered their team on in true Dukes spirit, roaring and chanting to encourage their peers. New King of the Couch teams led the excitement, starting with music in the halls during the day and carrying their energy all the way to the stands.

“During the game I try to be as crazy, energetic, and loud as possible to get everyone involved,” senior Sam Walsh said. “Getting our players hyped up goes a long way, and being loud and crazy in the student section helps more than people think. The players love it. Everyone has to buy in to represent the Dukes.”

While for some it was their fourth year attending the games and cheering on their home team, for others it was their first time experiencing the York Duke spirit.

“York games give everyone who’s there an individual sense of belonging and excitement,” freshman Leo Macariola said. “I made friends with people I never thought I’d talk to, and I definitely made some memories.”

On the field, poms, cheer, and the marching band worked together to spread Duke pride. The halftime show featured the marching band playing music from beloved Pixar movie “The Incredibles” and accompanying the poms and cheer teams for a performance to the song “Fireball” by Pitbull. The band was directed by senior drum majors Audrey Fathree, Jack Rosenberg, Lily Martinez, and Ryan Rask, all leading the band for the first time.

“I think my favorite part about marching band is the people. This sounds cheesy but we really are one big family that just likes goofing around and making music together,” junior Maggie Wisniewski said. “The band is a huge part of school spirit at York. Getting people off their feet and singing and dancing at games is what makes it fun!”

Friday night football is one of the most iconic parts of being in high school and being a Duke, and if there’s one thing the student body knows how to do, it’s cheer on their home team. Next week the team will play at Addison Trail, then travel to Lyons Township Sept. 7, and return home the following week for a Hawaiian themed game against Glenbard West.

“All the coaches and players on this team have been working their tails off since November building up to this game, and even though we didn’t come out on top, there was a lot of positive aspects to build off of,” junior Matt Kentra said. “I look forward to an exciting season.”

Check out the slideshow below for more pictures from the game! 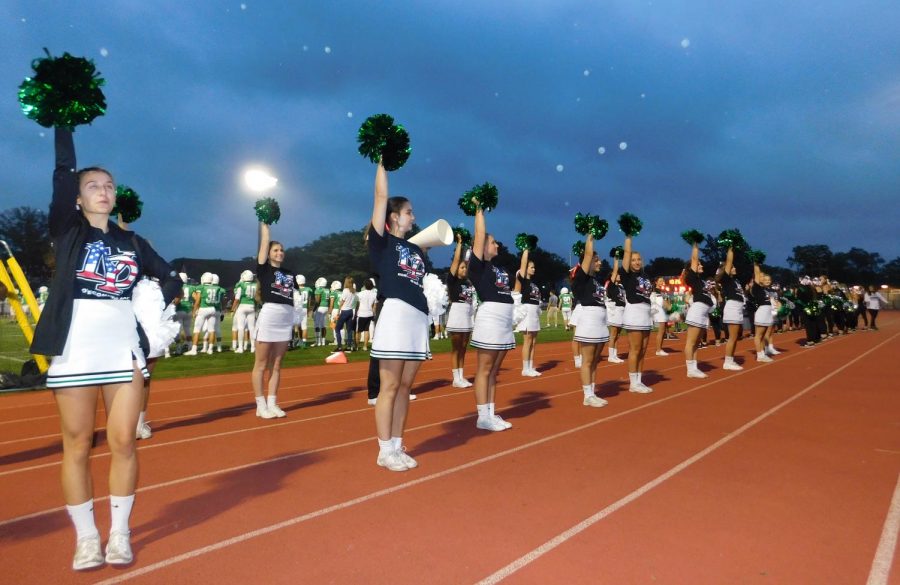 Gallery|7 Photos
Photo by Grace Moriarty
Cheerleaders lead festive chants to keep the energy up in the crowd throughout the game.