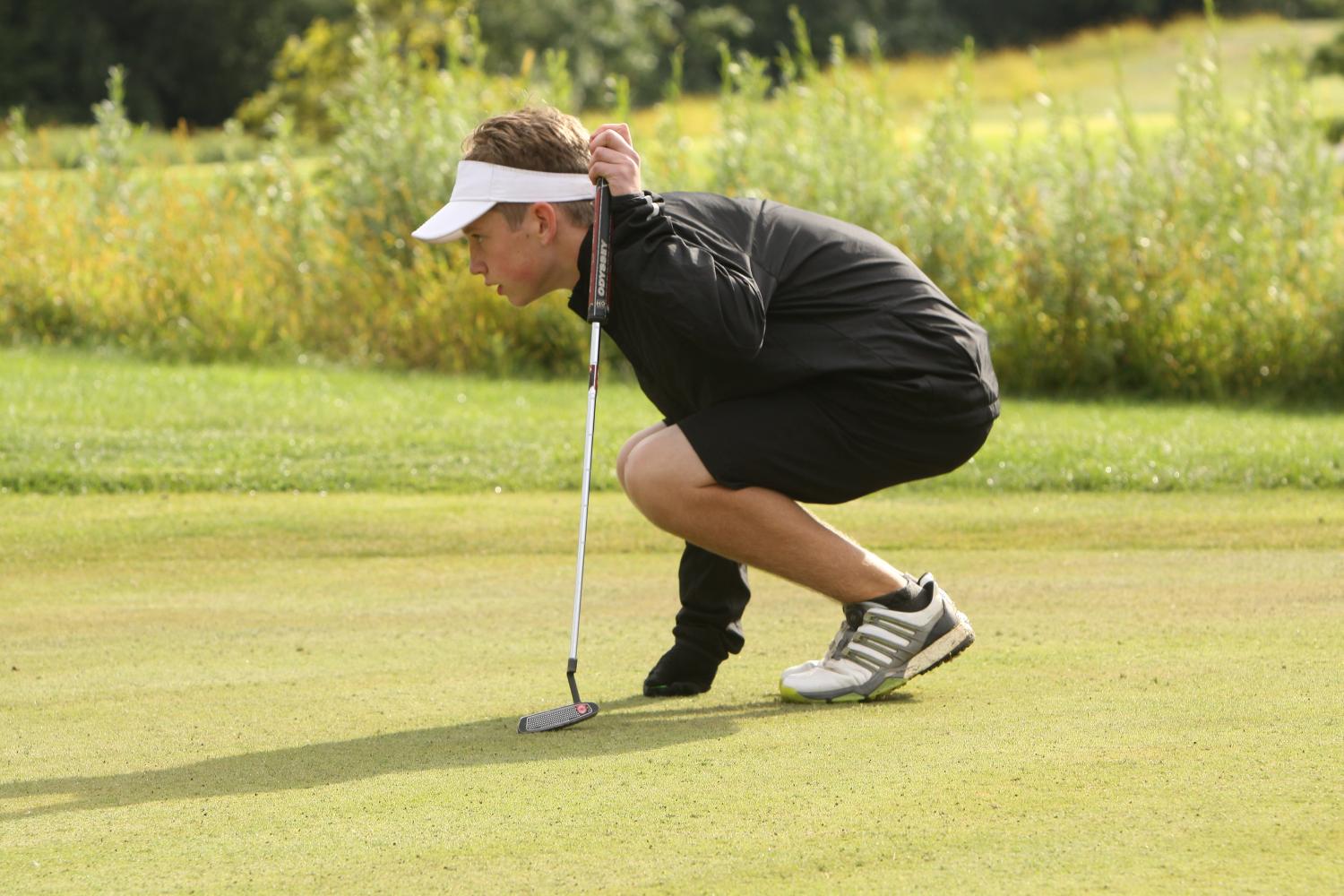 Sophomore Connor Polomsky debates how to line up his putt. (Photo Courtesy of Stuart Rodgers)

Sophomore Connor Polomsky debates how to line up his putt.

Boys golf looks to have a hole in one season

Following a very successful previous season the boys golf team looks to repeat and surpass their performance from last year as the team moves closer to a possible state championship.

Last year the team qualified for the sectional meet and was one stroke from qualifying for state. That team included two sophomores and one freshman. This year, the team has high hopes to surpass last year’s results and compete in the state championship meet.

“We have the potential to advance to the state meet as a team,” varsity coach Jim Borel said.  “The talent and the hard work is present, but we will have to play well in the IHSA Regional and Sectional [meets] to make it downstate. This team is one of the most talented York teams in years. I like our chances.”

However, before the team can focus on state, they still have several weeks to compete in meets against some of the best teams in the state. The team is currently 3-1 in dual meets, a respectable record to start out the season, but they will have to continuously work to face the six time defending conference and state champion Hinsdale Central.

“We are looking at a showdown with Hinsdale Central at the end of the season,” Borel said. “We need to improve our short game if we are going to compete against Hinsdale Central, but the players are supportive of each other and our record reflects our hard work at practice and in meets.”

The underclassmen are lead by senior captains Blair Faber, Jacob Wit, and Aidan Mann, the only York player to qualify as an individual for the state meet last year. In addition to these seniors, juniors Joshua LaBounty and Matt Buckley, along with sophomore Sam Bartolone, are pushing the team to great heights to pose a serious threat to Hinsdale.

“From top to bottom on our roster there are so many guys that can step up,” Mann said. “We are all really excited for the rest of the year, as we have the ability to do something special.”

As for plans after this golf season, the young talent that is moving up will carry the team in years to come, but for Mann, his golfing career is not over.

On July 19 Mann committed to play college golf at Fort Lewis College in Colorado where he will undoubtedly make great contributions to their golf program. Until then, Mann looks forward to a great final year with the York golf team.

“For the rest of the season I’m honestly just hoping for our team to play solid golf,” Mann said. “For the long run, I think anything can happen. I believe our team can do anything.”