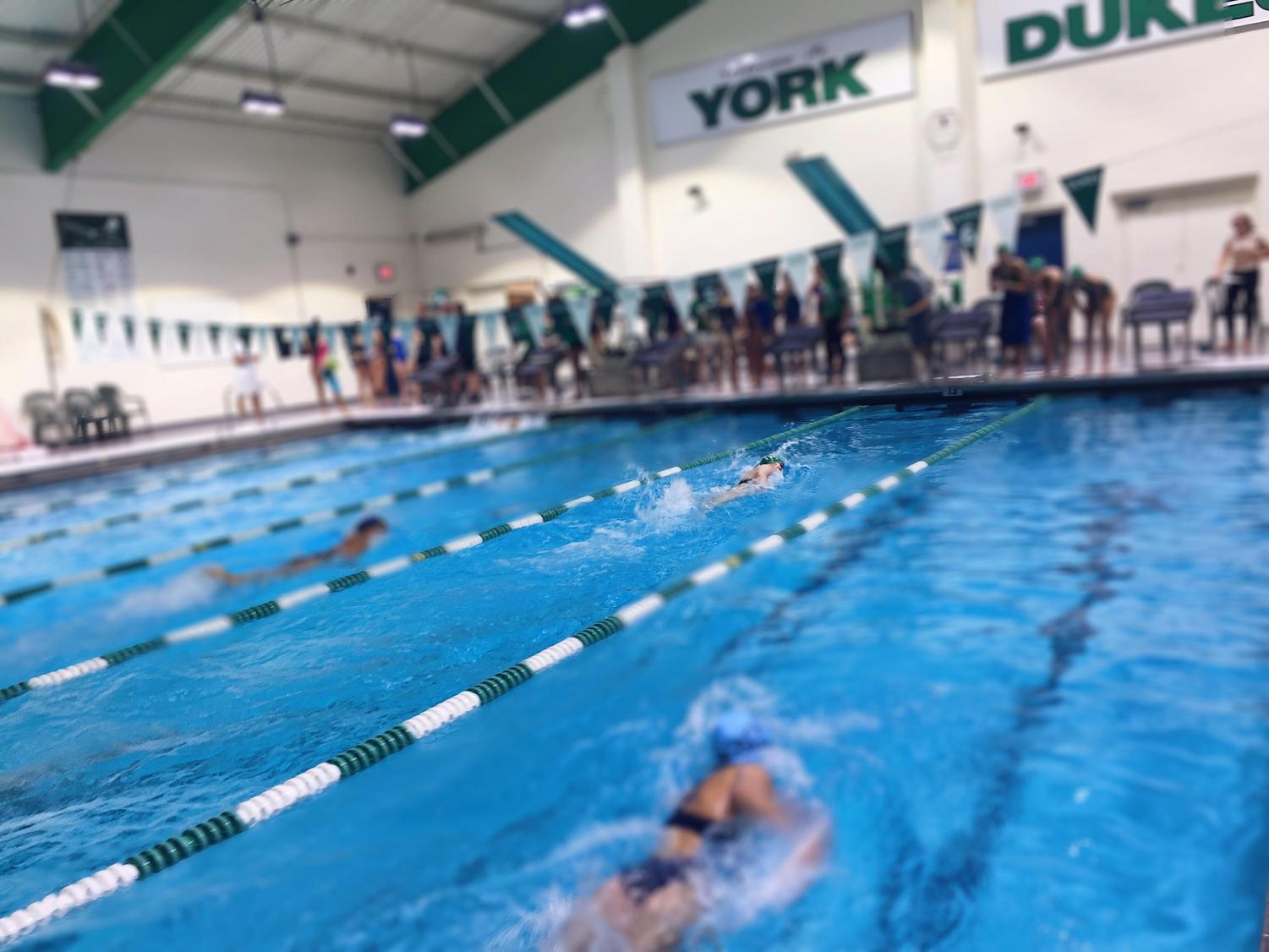 The Dukes started the meet, per usual, with a unified chant showing team and school spirit lead by the senior athletes, ending with cheers from the fans.

“The team does a lot better when the crowd is larger and we have better support,” team captain Delaney Tase said, “and it’s fun to see a meet because it’s so different from a baseball or basketball game, so you should come to watch one!”

After the rally of chants and cheers, the diving team started their meet. Because this is an individual sport, each of the girls is reliant on themselves to compete at their best ability, but the team is able to help guide them.

“The divers did phenomenal considering that most of us have injuries we’re still working through, but we still did great,” Hanna Homen, a junior diver, said. “The JV team has some pretty promising athletes, I’m so excited to see how they do the rest of the season.” 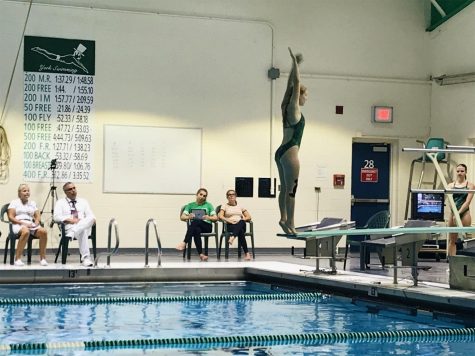 Photo by Katherine Steahly
Junior Hanna Homan preparing to do a reverse one summersault in the tucked position. 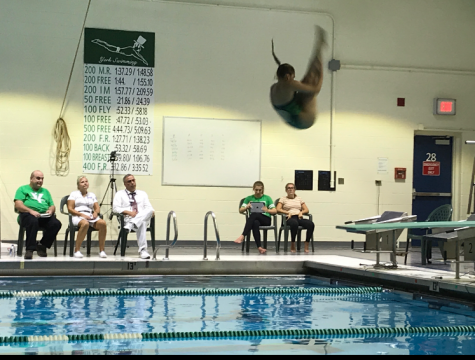 After diving, the swimmers got ready for their events, such as a 50 freestyle. As a team, they cheer one another on, whether or not every swimmer was competing that night

“Swim meets are really fun because you get to cheer on your teammates,” first-year swimmer Savannah Nichols, sophomore, said.

This year especially, there has been an emphasis on the importance of sportsmanship, helping the girls work better both as individual athletes and as a team.

“I learned there are bigger things than just wins and losses, and for me, it’s bigger than just getting first place or being the best, it’s bringing the best out of your athletes in terms of who they are rather than what they do,” Coach Skalon, Varsity Head Coach, said.

During the night, Skalon had the swimmers cheering for the Junior Varsity 200 meter Freestyle. York won the event with a 1:56.94. Sophomore Madison Sardo with a 28 second, Sophia Ladpodka with a 31 second, Hannah Lonergan with a 30 second, and Julia Beltran with a 26 second.

“The girls on this team are so supportive and encouraging of one another, and it really creates an environment where everyone feels motivated to do their best,” sophomore Hannah Lonergan said. “I’m excited to come to practice every day because I know no matter how hard our workouts get I’ll have fun because of the people I get to swim with.”

Junior Erin Peterson swam breaststroke during the meet for Varsity, a new territory (varsity) for her swim season.

“The meet went well for me, I did not gain any time from my personal records. I had so much fun cheering for my friends that I even lost my voice,” Peterson said.

Along with spirit, the team is also known for their traditions, one of which is the green tutu – a tradition passed down for years to a teammate who is especially engaged and apart of the team spirit. This year, Emma Radcliff is the owner of the green tutu. Radcliff constantly cheered for swimmers during each event, especially when York Varsity A relay team won the 400m freestyle relay, with a time of 3:52

While the swim team is very serious about winning, they are still able to understand the importance of fun.

“My goal this year is to have fun because it’s my senior year, so I’m just trying to enjoy every moment,” senior captain Sam Harrington said.  “I’m trying to show others that being positive is better and you shouldn’t be so hard on yourself.”

The seasons looking bright and positive for the dukes, and freshman swimmer Ciara Belfiore encourages students to come and cheer for their fellow peers.

“Come out and support the swim and dive team!”