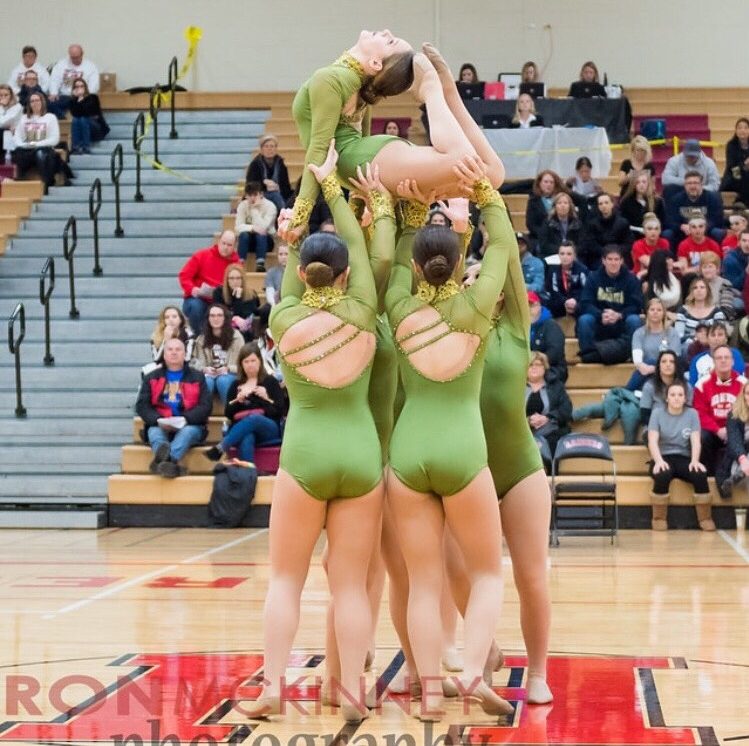 A photo capturing a pose from the sectional competition in 2018

Poms are kicking it up this season

When you’re standing up in the bleachers smashed next to your friends during halftime at a Friday night football game, do you ever stop and really watch the show? If you do, then you must know that the varsity dance team consists of some of the most skilled dancers in Illinois.

Last year, the team dominated the dance floor at every regional competition and ended up sweeping the first place title in the 3A division at the IHSA State Meet in January. In February, students and staff helped them celebrate their win with a pep rally that featured speeches from a few team members, but at the core of their success is their hard work throughout the season leading up to their win.

“Every hour spent on our dance was worth it and definitely paid off,” Amanda Gorski said.

Right when the football season ended, the team kicked it up a notch, holding practices for two and a half hours after school everyday. They understood the competition was going to be difficult, but they were ready to take the season head on. Stevenson High School was their biggest competition, but the dancers persevered and took the gold.

“The determination and drive set us apart from Stevenson and any other high school competing,” Del Medico said. “Every single dancer put their heart into every move–we wanted it so bad.”

As for this season, the team is determined to defend their title. With a new head and assistant coach, the team is prepared to work just as hard as last year, with the help of their new coaches who bring so much positivity to the team.

“The dancers here at this school are extremely talented and enjoyable to coach,” new head coach, Alyssa Ortiz, said

Just eight years ago Ortiz was a senior dancing of York’s varsity team. Being promoted from assistant coach to head coach this year, she has already given the dancers a lot of fun and new opportunities with nothing but high energy. Over the summer the dancers were brought to the UDA camp, which lets dancers work one on one with top dancers from colleges across the country, to better their skills. With the help of Ortiz and the assistant coach Lauren Caputo, the team has been perfecting technique, conditioning, preparing for a fun football season and to attack the competition season.

“It’s only September, and I’m itching for the competition season to start so everyone can see what I see,” Ortiz said.

The pride these coaches express for the girls is clear, as well as their encouragement and motivation.

“They don’t just bring positivity, but they also have been pushing us so much, which is what we need to win or even make it to the state meet again,” Del Medico said.

With nine seniors on the team, everyone is excited for the competition season. As much as they love football season, they love to win. Each senior this year plans to continue dancing after high school as well.

Without a doubt, varsity dance is ready to take on the fierce competitors this year.

“This year we are so excited to bring our new dance to the competition floor,” Del Medico said.

The energy is high, and after entertaining fans at the football games, this team will be competing on the weekends to defend their state title.