Senior girls pose for a photo after their victory. Photo by Michael Moriarty

Senior girls pose for a photo after their victory. Photo by Michael Moriarty

Powderpuff recap: Class of 2019 solidify their title as undefeated champs

Two days before junior and senior boys take to the field to play their homecoming game against Willowbrook, the junior and senior girls dominated the York field in the annual powderpuff game. The class of 2019 made headlines when they won the previous year, and took the title again this year with a 30-6 win, solidifying them as the undefeated champs.

“It was very thrilling,” senior Riley Haug said. “I was really nervous to go in, but then once I was in it was so exciting… It was a really cool senior experience.”

Although the juniors scored in the first quarter setting the score 6-0, the seniors quickly came back to take their second win. Overall, both teams had a great time and were excited that their school came to cheer them on.

Although some girls were unable to play because they are currently athletes in fall sports, they still stood on the sidelines and cheered on their teammates.

“I have never gotten to play, I’ve always been on the sidelines,” said senior Lauren Simpson, a member of York’s poms team, “but it’s still cool that someone who’s on the sidelines can still feel like part of the game. I still felt like a player even though I wasn’t at all.”

While players on the field were working hard, behind the scenes, student council has also been on the grind to pull of this annual event.

“The committee has done a lot of great work,” said sophomore Ava Uditsky, chair of the powderpuff committee. “It takes a lot of coordination to make these things happen, especially with the athletic department and within student council.”

Along with work by the powderpuff committee, student council artistic director Toa Hofflich designed the shirts that both seniors and juniors wore.

To prepare for the game the girls were coached by Mary Kate Martinelli (junior head coach) and Elizabeth Munn (senior head coach). Along with the head coaches, boys from the varsity football team lent their football talents to assistant coach the teams.

For an entertaining halftime show King of the Couch groups performed along with the marching band, as with tradition at York.

“It was an absolute blast,” said senior Camille Steahly, a member of the King of the Couch group Duke it Out. “My group and I had so much fun going out there. We had very brief rehearsals prior to the game, so going out there we decided to give it our all no matter what happened.”

Both junior and senior girls enjoyed the fun night of football, and seniors were excited to once again take home the title.

“I think it’s something we’re really proud of as a grade,” senior Demianna Asaad said. “Everyone I talked to is very excited about that. And, rumor has it, we’re the first grade to do that in 10-15 years, so that’s really exciting.” 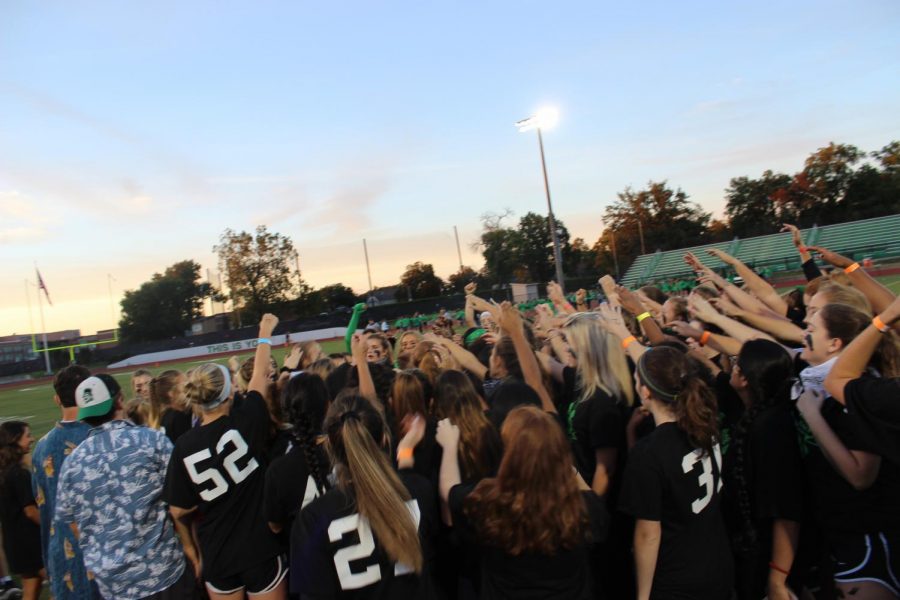 Gallery|20 Photos
Before the game senior girls huddle and chant to get their team hyped up. Photo by Ellie Ryan