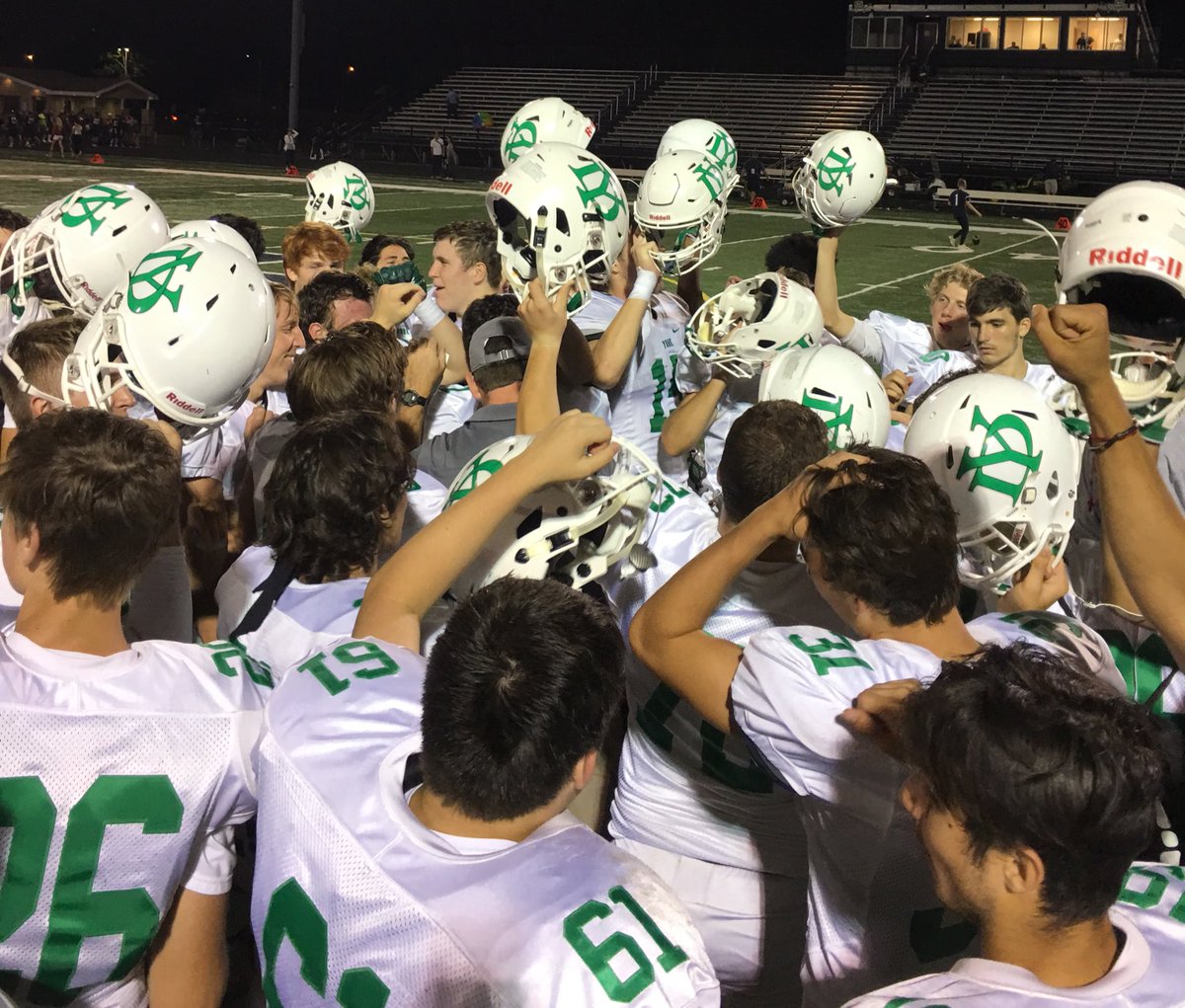 The York Varsity Football Team crowds Coach Fitzgerald after their first victory of the year against Addison Trail. Photo courtesy of York Athletics

As the 2018-2019 football season is now underway for the Dukes, there has been a lot of hype regarding the new asset to the team, Coach Mike Fitzgerald. Fitzgerald began his career at Marist for six years, then spent the following two years at St. Francis, Naperville North for another two years, and now is continuing his career at York Community High School.

In 2016, Fitzgerald’s Naperville North offense piled in 3,700 run/pass yards and also produced an All-Conference Quarterback. In his short time at York, Fitzgerald has already brought life back to the varsity football program.

“I became a coach because I wanted to have an impact on young men,” Fitzgerald said. “Football and athletics has done so much for me in regards to my character development, and I wanted to have the same impact that my coaches had on me.”

Along with being the new coach, Fitzgerald has taken on the role as a mentor for his players, teaching them how to become not only physically tough, but mentally tough, as well.

“People should know that Coach Fitz is more than a coach to all of us,” senior Joe Goehl said. “He’s a mentor. We’re going to remember his lessons forever. Football isn’t a walk in the park it’s a game that takes a lot of adversity and toughness.”

Stepping into the role of head coach to a previously 1-8 team is not the easiest position. However, Fitzgerald seems up to the task.

“I honestly don’t think about the past because all you can control is the present,” Fitzgerald said. “Additionally, nobody puts more pressure on me than I do on myself. I have a very high standard for myself, and I’m constantly pushing to become better as a coach.”

The York football program has had several head coaches come and go through the past decade, but in his time at York, Fitzgerald has had a unique impact on both players and coaches.

“Coach Fitz has impacted the team by cultivating a family atmosphere. It’s a major point of emphasis for him to see everyone treated well and taken care of,” defensive coordinator Bill Kroger said. “He is very organized and works very hard.”

Even though Fitzgerald has only been coaching at York for four months, he has been enjoying every bit of the way. While it’s very easy to love the community and atmosphere around you, Fitzgerald mentioned the differences about being at York.

“I just feel really supported by the administration, parents, and community,” Fitzgerald said. “Everybody is really behind York and the football program, which makes me really excited about where we can take the program.”

When Fitzgerald chose York, he knew there was more to the football program than their record over the previous years. He looked into the school and saw talent among the students, who impressed him with their dedication both on and off the field.

“York really was interesting for so many different reasons. It’s a great school that has high standards in everything they do, and I wanted to coach at a school where kids know there are high expectations in the classroom, in the community, and on the field.”

Elmhurst offers programs that prepare young football players for the high school arena. These programs, like the Elmhurst Eagles, get kids playing from elementary school all the way up to when they are of age to play for York.

“From a football standpoint, I wanted to coach in a great conference like the West Suburban where every week there would be a great challenge,” Fitzgerald said. “I also was really drawn to York because of how strong the Elmhurst youth football program is and that they feed directly into the school and aren’t split into several schools which is hard to find. York football has a rich football tradition, so after going through the process, I really felt like we could get the program going in the right direction.”

Fitzgerald’s work has certainly lit a fire under the varsity football players and reignited excitement within the community. While the team is grateful to the changes Fitzgerald has made to their lives on the field, they also appreciate the importance of his guidance off the field.

“I think that Coach Fitzgerald is not only a great coach but a great man,” Goehl said. “He pushes us to be the best we can be everyday, not just in football but in life too. You know he is always going to be there for you and help you with whatever you need. We’re grateful to have him.”