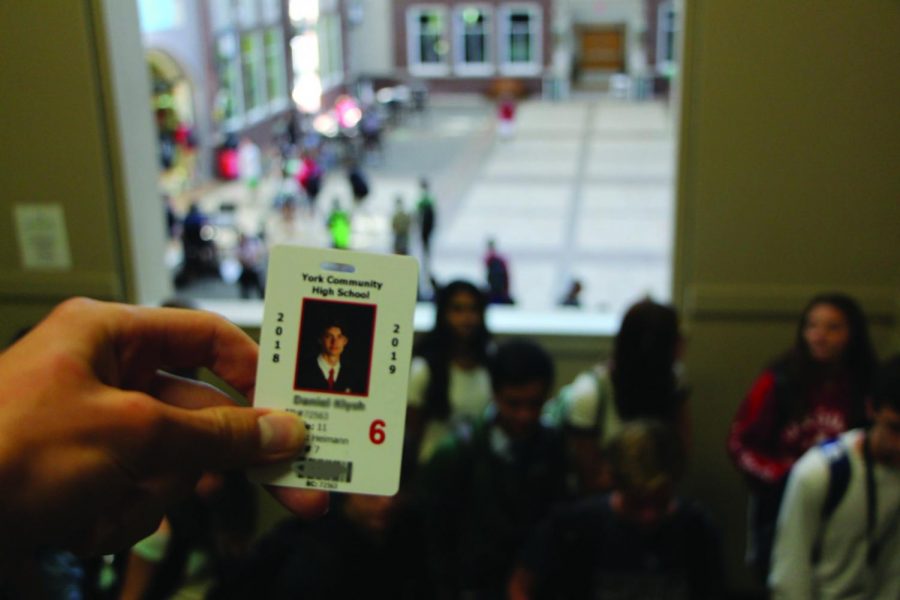 A student presents his ID before entering the cafeteria.

Following the Parkland shooting last year, schools around the nation have been asking the question: Is our school safe? Now, many schools are implementing new policies to ensure student safety. York is no different.

From lanyards to senior off-campus privilege, the administration has implemented new policies that they believe will improve student safety. However, certain policies have been the subject of criticism by some students, who claim that they make no impact on student safety.
In an anonymous survey of 477 students across grade levels, 79.5% responded that they do not feel safer with the new policies. However, the overwhelming theme in the survey was that students did not understand why the policies exist and how they are helping.

“Maybe I’m just looking at it wrong,” one junior respondent said. “But the administration fails to provide an explanation for their reasoning behind each rule. We aren’t able to understand if they don’t tell us beyond the fact it’s for our safety.”
For some students, the underlying problem is not coming from the policies themselves but rather from the lack of communication between the students and administration.
Although the administration has emailed students and parents about policy changes and often discusses policies with their two student advisory groups, York Advisory Team (YAT) and York Advisory Committee (YAC), many students claim communication is lacking.

“We could do better at communicating these [new policies],” assistant principal Drew McGuire said. “Some of the [policies] we implement need to get approval from our bosses, so sometimes we are waiting until the school year is over, and when these things are happening over summer, not everybody is watching or tuned into school. We send something in June, and it’s long gone by August.”

So, why have these policies been implemented, and what concerns do students have?

The results of the survey concluded that 74.2% of students believed the most effective policy was limiting the doors in which one can enter and exit the building. During the day, students are only able to go in and out of the building through door A.

Students and the administration both stated that the door policy ensures that the staff will know who is coming in and out of the building during the day. However, the lanyard policy, with the similar goal of knowing who is in the building, does not share the same level of student approval.

In the survey, students called into question the effectiveness of the lanyards. They argued that, although lanyards and the lunch lab stickers attached help with identifying who is in the correct location, they are easy to forge and would not protect anyone from an incident caused by a student of York.

This is compounded by the hard fact that students rarely wear their IDs in the entirety of the building.
“A lanyard doesn’t make a difference because no one wears them anyway,” one sophomore student said. “And if someone were to come [into school] that doesn’t go here, they could just fake [an ID].”

The administration, however, claims that not only do lanyards enable staff to do their jobs more effectively, but by allowing staff to quickly identify if students are in the right location, lanyards also prevent unnecessary questioning of students.

However, one of the unfortunate realities is that wearing lanyards only helps when students decide to wear them.

“The fact that the lanyard policy is flexible when it comes to entering and exiting the building, which is the most important purpose of the lanyards, defeats the entire functionality of them,” sophomore Ava Uditsky said. “The policy could be more effective if it was enforced.”

Although students still claim the lanyards are not worn consistently throughout the student body, there is an increase in both awareness and enforcement of the lanyard policy in comparison to last year.

“I think that a lot more students are wearing them this year, and it is definitely a noticeable change from the past,” senior Abby Ross said. “The teachers are really starting to enforce and maintain the ID policy, and I feel like having all the memes around the hallways doesn’t hurt either.”

Although most students express frustration with lanyards, the survey showed that many upperclassmen, especially seniors, disapproved with the changes to off-campus privileges that took effect this year.

For many years seniors have enjoyed the privilege of leaving campus during their lunch period and study hall. This policy created a more open campus in which seniors could roam more freely.
However, starting this year, seniors will only be able to leave campus during their lunch periods. For students, this reduction in privileges feels like unfair treatment based on the actions of previous senior classes.

“It’s not fair to punish a senior class because of the previous senior class’s actions,” one senior student said. “We haven’t even been given a fair chance yet, and we’ve been promised this privilege for the past three years. It just feels like a slap in the face from York.”

In addition the seniors’ frustration towards their lack of privileges, students feel that the system in which seniors are allowed to obtain off-campus vets them well enough to prevent students from abusing their off-campus power.

“I understand that the administration felt that kids were running around the halls during lunch periods without supervision,” senior Riley Haug said. “However, when seniors get their off-campus, our grades, attendance, and behavior is looked at by the deans. We have to earn our off-campus through four years of good behavior, grades, and attendance.”

However, the administration is more concerned with maintaining a safe environment and did not mention previous senior classes in their rationale for tightening off-campus rules.

“After some of the events that have happened recently in other communities, we began to think about if an open campus is the policy we want to have with students in unsupervised areas,” McGuire said. “And we decided it was a sacrifice we were willing to make.”

While safety is the main concern that drove the administration to change off-campus, they also considered the need to effectively use their staff, as many seniors would choose either first or eighth-period study halls so they could leave school early or get in late.

“We also have a staffing issue we need to worry about,” McGuire said. “When you staff a study hall at 50 kids and the second week of school, the study hall goes down from 50 down to ten because all of the seniors are out of study hall, we’ve wasted a staff member in a position where we could have combined the study hall and used the staff member elsewhere.”

While students understand the stance of the administration, they still express frustration over the changes because the students who would have received off-campus proved that they deserved it.
The same type of sentiment is shared with non-seniors regarding the policies that prevent students from moving around during lunch. They argue that the vast majority of students are doing what they are supposed to be doing and would use the time to help their academics.

“I believe it’s unfair to not be able to leave the cafeteria without a pass,” one junior respondent said. “There are some days when, at the last minute, I realize I need to meet with a teacher to get help on an assignment, but I’m unable to due to the pass policy. If the school wants us to be successful as students, they need to recognize how this policy isn’t allowing us to reach our academic goals.”

While the administration recognizes these concerns and many other student concerns, Principal DeLuga and other administration staff say the most important objective is to keep the student body safe, and they are convinced that their policy making is in the benefit of students.

In addition, the administration is in the process of organizing times during lunch in which all students will be able to voice their concerns about school safety in order to help shape those policies to be the most effective and beneficial that they can be.

If you have a concern you would like to voice, send an email to our editor at [email protected]