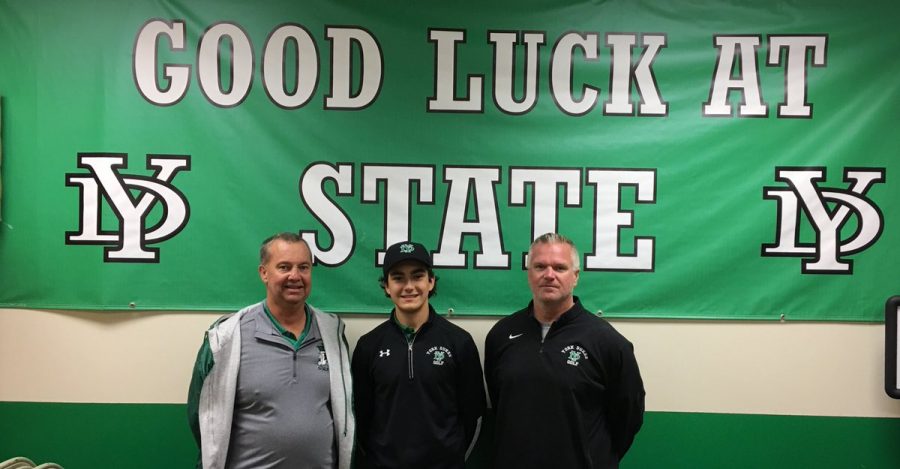 Over the past two weeks the boys golf team has enjoyed some important success. The team won the regional meet with a score of 298, and junior Joshua LaBounty won the meet with a one under par score of 70. Then, at the sectional meet the team missed the cut off of making state as a team by three strokes, but sophomore Zachary Sutter qualified individually for state with a round of 77.

Their season was full of up and downs, but when it mattered, the team pulled through. Their first hurdle to clear was the regional meet at Hilldale Golf Course.

“At the regional meet we played a very difficult golf course, it was windy, and it rained around two inches the night before,” Varsity Golf Coach Jim Borel said. “Then for Josh to be under par was awesome. Really, every one of our kids went out and played well. It’s hard to win regionals and we’ve had really good teams in the past and we haven’t won the meet, so you can’t take that for granted.”

The players certainly did not take winning regionals for granted and achieved the feat with hard work, determination, and perseverance.

“As the season progressed we began to work together more and we realized that we could use each other’s want to be the best to fuel ourselves to play our best,” LaBounty said. “This helped me a lot because I wanted to succeed the most on the team and be a leader. There was a competitive atmosphere around the team as we tried harder and harder to earn the number one spot on the team, and in result it pushed us to play our best.”

The team’s victory at the regional meet marks their first regional championship and the first post-conference championship since the team won sectionals in 2015. Although the team didn’t shoot as well during the sectional meet, there was still success through adversity.

“At the sectional meet we faced a lot of the same challenges as the regional meet and we didn’t play bad,” Borel said. “We had three 77s and a 78 on a tough golf course, with windy conditions, and rain so we were proud of those scores too.”

Although the team missed qualifying for state as a team, Sutter, who shot a 77, will be going down to state to compete in the meet as a sophomore, which means great things for the team in the years to come.

“The start of the year definitely started off shaky as a whole,” Sutter said. “But as the year continued, many of the upperclassmen took charge and propelled us to a very strong finish to the season. I am very fortunate to be representing York down in Bloomington and I hope to give it all I have [in the state meet.]”

As Sutter leaves with fellow state competitor senior Bella Bartolone from the girls golf team, Borel expresses his huge confidence in his team and his players.

“Other teams need luck,” Borel said. “We have skill.”