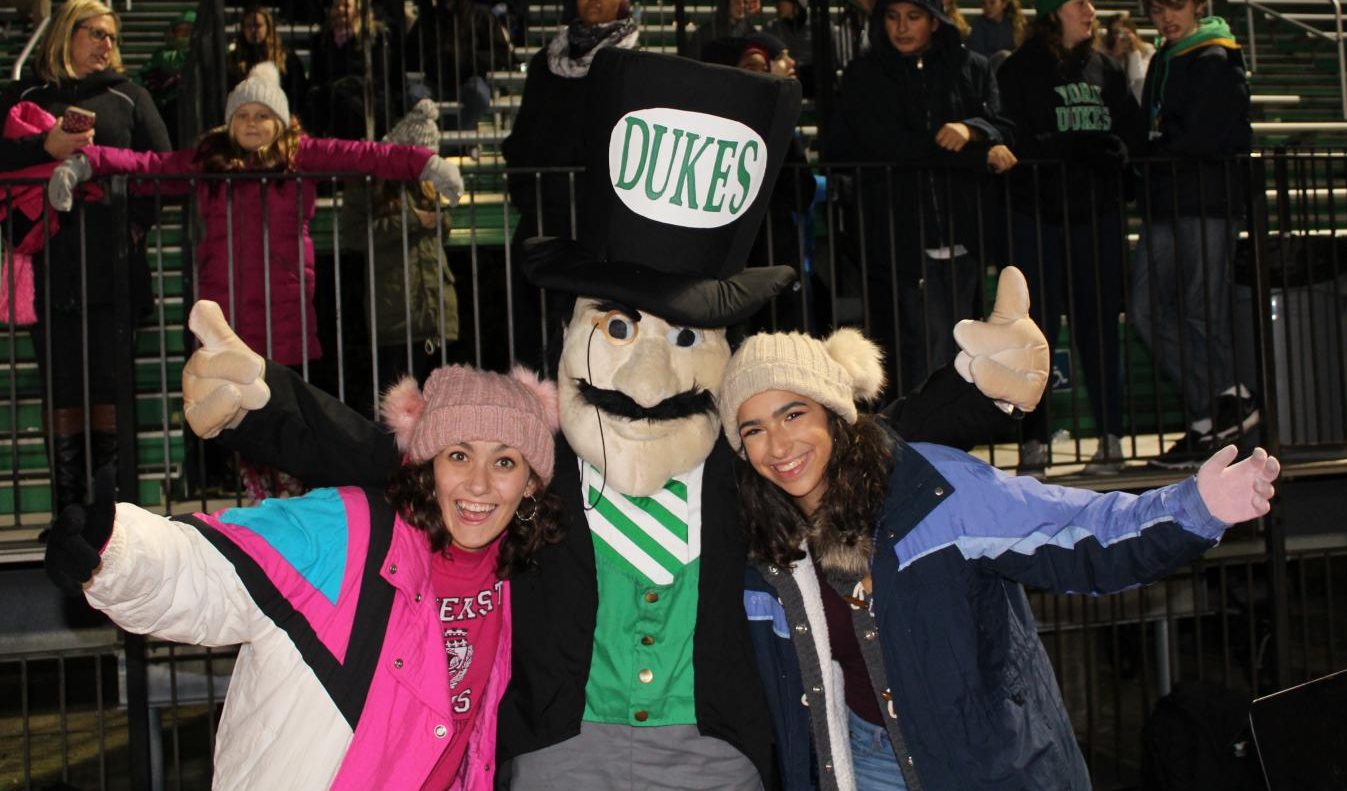 The Duke poses for a picture with Hanna Meloy and Sophia Fischer during the halftime show. (Photo by Gracie Weinstein)

The Duke poses for a picture with Hanna Meloy and Sophia Fischer during the halftime show.

The Dukes dominate on their home field

The Dukes dominated in their game against Proviso West this past Friday, the varsity team winning their first game at home. The game started off with a bang with a 32 yard pass by Joe Javorek to AJ Munoz for a touchdown with ten minutes to go in the first quarter.

“It felt great to win as a team,” senior Charlie Eipert said. “Especially with such an exciting start to the game when we scored on our first offensive play.”

York and Proviso West went into the games with 2-5 and 1-6 records, respectively. York took the field with confidence, hoping to win during this conference game.

“I felt a very strong positive attitude in the locker room. I knew coming in that it was going to be a different kind of game and I was hoping that everyone would get a chance to play,” senior Bo Thomas said. “I felt very relieved at half time knowing that we were up by a considerable margin and was looking forward to people who don’t see the field that often to get in to play.”

At the end of the first half York’s team took the lead with touchdowns by seniors AJ Munoz, Josiah Scott, Zane Heemsoth, and junior Owen Pechous, bringing the score to 35-0 as the boys rushed off the field and the marching band, cheer, and poms teams took the field for a chilly halftime show.

In the third quarter the boys continued their scoring streak with a touchdown by senior Mikey Pedote. Proviso West senior Kyrell Taylor slipped in a touchdown in the third quarter as well, but a quick fourth quarter led to a steep 42-8 win by the Dukes. This win was attributed to the team’s hard work all week that reflected in their performance on the field.

“We had a great week of high energy practices leading up to Friday night,” senior Zane Heemsoth said. “The coaches also set us up with a great game plan which allowed us to do well in the game. Outside of practice I had to watch lots of film and take care of my body so I could be ready to play once we stepped out on the field.”

The team was ecstatic to win on their home field, and seniors found the success bittersweet as they come to the end of their York football careers.

“I felt great after the game; it was a very good all around team win,” senior Anthony Scalzitti said. “I was happy for everyone to get a chance to play under the lights because they work hard every week and deserve some recognition.

Come out and support the Dukes in their final game of the season this Friday when they play Downers Grove North on their home field.