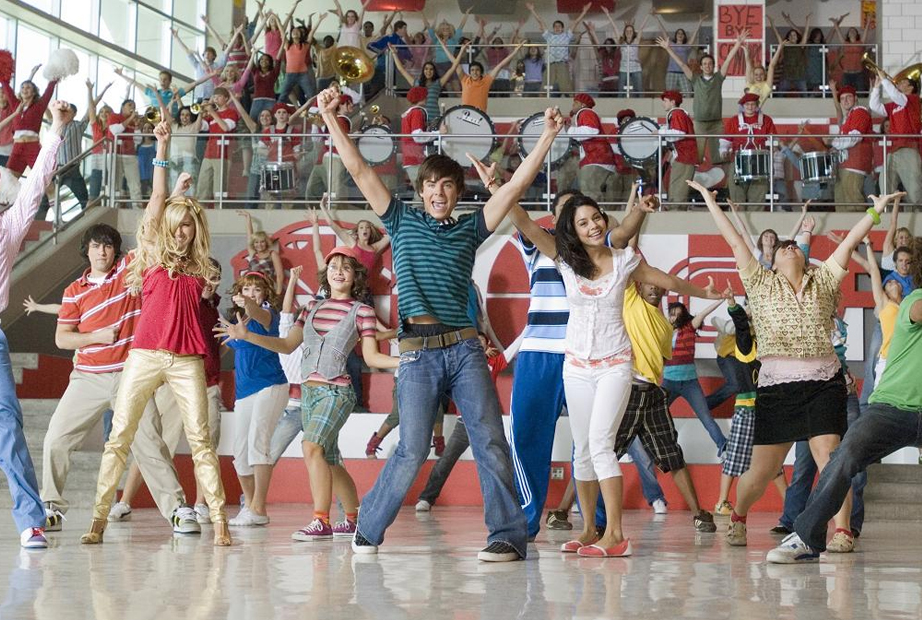 Thought the York Commons would be straight out of a Disney movie? Think again. (Photo courtesy of Disney-ABC Domestic Television)

Thought the York Commons would be straight out of a Disney movie? Think again.

In 1985, an athlete, a basket case, a princess, and a criminal ran through the cafeteria during detention. In 2004, The Plastics let Cady Heron sit with them. In 2006, Troy Bolton hopped on top of a cafeteria table to express his love for music and dance. In 2018, York students responded to our survey in which 67% said that the cafeteria made them anxious, the main reason being “it’s too crowded.”

“My first impression of the cafeteria was it was loud and scary,” freshman Leo Macariola said.

According to current data provided by administration, the number of freshmen, sophomores and juniors in each lunch period total 655 (4th), 680 (5th) and 615 (6th). These numbers do not account for some seniors who still eat in the cafeteria or for underclassmen who may have lunch labs, study in the Learning Commons, visit the math lab, etc. In fact, these numbers are shifting daily, and it’s virtually impossible to identify an exact number.

One thing we do know, however, is that it is possible a student will not find a place to sit, perhaps because there is no available chair or maybe because searching for a chair at a crowded table of unknown students will put them in an uncomfortable, anxiety-inducing situation.

On September 19, a York hi reporter researched the current seating situation (see page 5) and found that, in addition to 689 chairs in cafeteria, there are 26 bench seats in the Commons, eight tall tables with 33 chairs surrounding them, and 12 chairs at chromebook charger stations.

Regardless of the numbers, the cafeteria is usually a busy, crowded place, and students have had negative experiences regarding seating that lead to cafeteria anxiety.

“One time there weren’t enough tables to sit at in the cafeteria, so my friends and I had to sit on the ground in the Commons. There was barely any room, and I couldn’t even put my food out in front of me to eat it,” junior Abby Moriarty said. “I have really bad anxiety, so sitting on the floor in the crowded Commons really made me feel even more anxious than I had felt in previous years when there used to be ample space for people to sit, because of the fact that people were allowed to go to the Learning Commons, math lab, etc. during lunch.”

In the middle of an already stressful day with tests, homework, and the social expectations of high school, areas like the Learning Commons and math lab provided a calm space for students to ask for help from teachers and complete their work in a quieter area than the always busy lunchroom. While students can access these areas at the halfway bell, they now require a pass from a teacher every time they want to go, which makes these areas less accessible for students who routinely utilized them in previous years.

“I usually like to finish some school work or homework during lunch if there’s something big I should be working on, but doing it in the lunch room doesn’t give me a quiet environment to work on assignments,” sophomore Mia Ganaden said. “Through this, I have become more and more stressed with having to work on all these assignments at home, even though it’s only been about a few weeks into our new school year.”

Culturally high school has become a place where social interactions never turn off. Not only are students constantly getting Snapchats, texts, and being tagged in Instagrams, they get emails and texts via Remind from teachers almost 24/7. This non-stop media culture can be overwhelming, and this idea transfers over to the cafeteria.

“I would say that when we were in high school, you staked out your place [in the cafeteria] and you had your group and that was that,” Assistant Principal Ryan Doherty said. “I think that you could sit next to another table of kids that you didn’t even really know, but it didn’t bother us. I would say that there is more anxiety about people feeling like everyone is looking at them that just didn’t exist when we were kids, partially because I think with social media everyone is kind of blasting out constantly whatever they’re doing or whatever they’re thinking and because they see responses to it they feel like everyone is watching. Some people love that, but some people also hate that.”

More high school students than ever are experiencing anxiety; a study by Psychology Today states that for the past 30 years the rate of teenagers who experience anxiety has raised to 25% and will only continue to grow. While social media use and anxiety have both risen in previous years, a study by the Harvard Graduate School of Education stresses that correlation could not necessarily be causation. But, this idea that you are always being watched has caused negative effects that are amplified by the atmosphere of the lunchroom.

“Whatever we think of the ‘relationships’ maintained and in some cases initiated on social media, kids never get a break from them,” said Dr. Donna Wick in an interview with Rachel Ehmke for the Child Mind Institute. “And that, in and of itself, can produce anxiety. Everyone needs a respite from the demands of intimacy and connection; time alone to regroup, replenish and just chill out. When you don’t have that, it’s easy to become emotionally depleted, fertile ground for anxiety to breed.”

In a world where you are constantly connected, how we meet people and interact with them has changed. While an online forum with all of your peers is normal for students in this day and age, the cafeteria, a real life forum with all of your peers, can feel like a nightmare to some students. This “time alone to regroup, replenish,” and “chill out” that Dr. Wick discusses was something that many students found in their separated lunch spaces, such as the LC and music department, but with new policy, they are forced to confront the often times daunting and overcrowded space of the cafeteria.

“I have not had trouble finding places to sit previous years. Now, with the new policies, I cannot sit with my senior friends and have been forced to sit alone,” junior Avie Magner said. “Some days I skip lunch and just spend time in the band locker room where I can find people I know. I am struggling now that I feel socially isolated in school.”

In addition to these grievances by students, there’s always discourse when a unique opportunity is taken away. The more relaxed cafeteria rules in previous years gave students a privilege they became used to, and now that new policies are being enforced, there’s going to be pushback. We saw this last year when the rule was implemented that seniors would no longer be able to have off campus privileges during their study hall periods – certain juniors met with administration and even started a petition.

With the new cafeteria policies, the administration has implemented things like ID stickers to accomodate for students who have found that the new cafeteria rules prohibit them from completing their daily activities at school, but the struggle continues to be finding the balance between what is manageable and what is impossible while keeping the interest of the entire school community in mind.

“We have to find a balance of kids eating their lunch in the bathroom because they don’t feel safe in the cafeteria versus just being able to take food wherever they want to eat,” Assistant Principal Drew McGuire said.

Although the new cafeteria policies have felt constricting to some students, both students and school leaders need to take ownership for making the cafeteria a welcoming space that doesn’t add more stress to the lives of high school students.