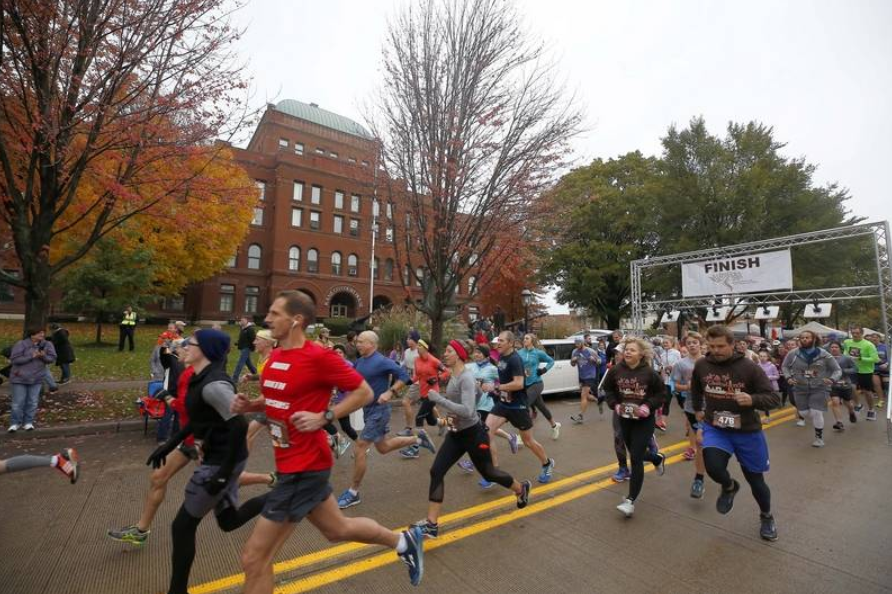 Participants embark on their 13.1 mile journey. Nov. 4, 2018. (Photo courtesy of Brian Hill of the Daily Herald)

Photo courtesy of Brian Hill of the Daily Herald

After the XC season is done, senior runners take on the 13.1

Long after the spikes were taken out of their racing shoes and their uniforms were returned to the school’s basement cages, seniors Claire Libert and Delani Kazmierczak were out on the Prairie Path putting in miles in preparation to run a half marathon. 13.1 miles is no easy feat, but with the dedication that these two girls put it, they were able to run one with just a few weeks of training after the regular cross country season ended.

Libert and Kazmierczak came up with the idea to continue their cross country training in the middle of their season after volunteering for the Bank of America Chicago Marathon back in Oct. and seeing both elite and regular runners take on the daunting 26.2-mile race.

“Delani and I volunteered at the Chicago Marathon at the elite fluids table and when we got back in the car after cheering for the runners, we were so hyped up and joked that we should run a marathon,” Libert said. “Then we thought about actually running a half marathon. Delani googled half marathons that were coming up and we found one called the ‘Oh La La Chocolate’ on Nov. 4., which gave us three weeks to train.” 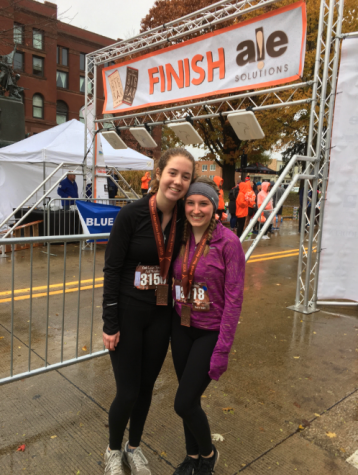 Training for the half took a lot of mental strength and perseverance. Each day after school, the girls met at the path and embarked on runs that added up to 10 miles, far longer than any long run they completed during the season.

“Everything was going great with training until we decided to run 9.5 miles at Waterfall Glen,” said Kazmierczak. “At the beginning of the run, we were feeling great and running 8:30 [miles].  Then, right before we hit mile 6, this huge hill comes out of nowhere and I literally just laughed because I thought there was no way I was going to be able to run up that thing. The rest of the run was awful for us and it made me think that there was no way that we could run 13.1 miles.”

Before the race, the girls dealt with the pre-race jitters and anxiety, feeling as if they weren’t prepared enough or that they weren’t going to be able to run the entire time, which continued with them throughout the first few miles of the race.

“The night before the race, I was sitting in the car with Claire and we were dreading waking up to run the next morning because it seemed impossible that we would be able to run this,” Kazmierczak said. “When we first started the race, I couldn’t wrap my head around how long we’d be running, which made the miles begin to feel really long.”

Kazmierczak and Libert faced obstacles and challenges, such as being tired from attending the state meet the day before and dealing with intense leg pain as they climbed over hills, but they persevered and were determined to finish the race.

“Our legs were cramping and it was hard to breathe, but we knew that if we stopped it would feel worse once we started again,” Libert said. “There was a massive hill we had to run up during the 13th mile and it took a lot out of us but we regained speed when we realized just how close we were to the finish line.”

Just like in their training, the race was both physically and mentally challenging, but with the workouts under their belt from the cross country season and the support of their families and the other runners around them, the girls ended up running the entire race and finishing with a time of 2:02.

“Delani’s mom cheered us on from the start of the race and my parents came when we were at mile nine, which was extremely encouraging,” Libert said. “The runners on the course were so nice and funny and the cheering from the spectators was so helpful. At one point in the race, a woman gave us smarties because she said we needed sugar, which mentally gave us a little boost.”

After crossing the finish line and feeling the warmth of the cup of hot chocolate in their hands contrasting with the cold hard medal placed around their necks, the girls were in shock, but ecstatic that they had just completed a half marathon. 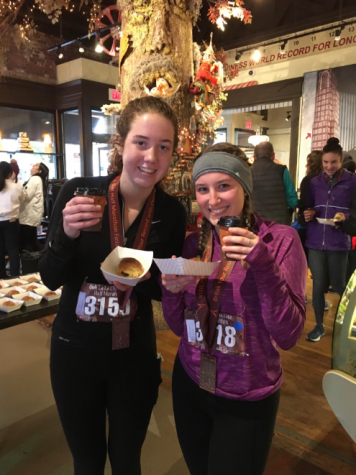 “When we crossed the finish line our legs felt like jello and we could barely walk but it was so worth it,” Libert said. “I couldn’t believe that we had just run 13.1 miles. It was crazy to think that when we finished running a half marathon at 9 A.M., most people our age were waking up or still sleeping. It was a wild morning for sure.”

After the lactic acid had drained from their legs and feeling started to return to them, the girls reflected back on their experience and both came to similar consensuses, running another half marathon would not be in their near futures.

“I don’t see either of us running a half marathon anytime soon,” said Kazmierczak. “I think we are good with running just one, but I am so happy that I can say that I have completed a half marathon.”