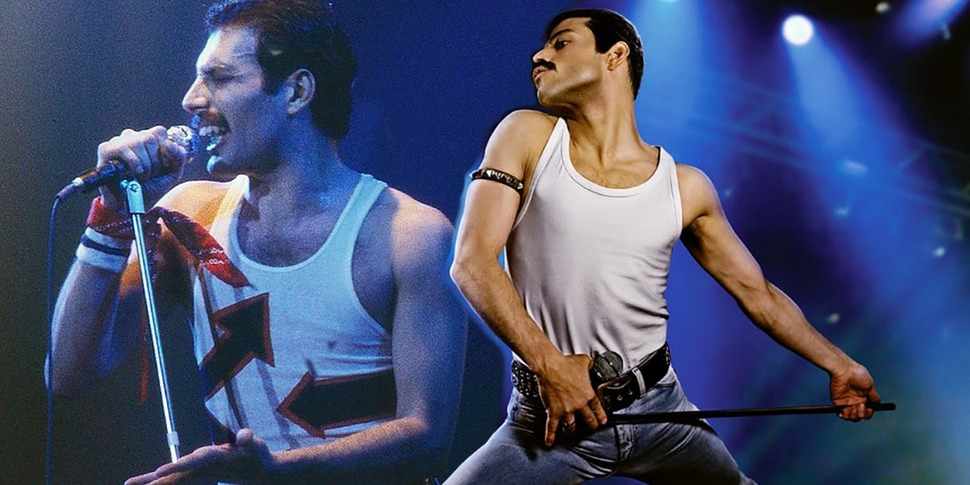 When the first images of Rami Malek as Freddie Mercury were released in April 2018, buzz started over the actor's similarities to the rock icon. Photo courtesy of The 405

When the first images of Rami Malek as Freddie Mercury were released in April 2018, buzz started over the actor's similarities to the rock icon. Photo courtesy of The 405

Rami Malek will rock you in “Bohemian Rhapsody”

Queen: an iconic band, an iconic name. Anything less than the grandest, most sequined, larger than life spectacle would not live up to the rock god Freddie Mercury. While Fox has made a valiant attempt in “Bohemian Rhapsody” with impressive performances by its lead actors and entertaining music sequences, the film, which suffered from a director switch at the very end of the shoot, is cinematically across the board as it tries to fill some gigantic shoes.

Beginning in Queen’s early years, the rock n’ roll gang band together with their bell bottoms and long 80’s locks in a meeting almost too picturesque. To summarize:

This is true for much of the movie. They ride through their glory years in impressive concert scenes, Malek embodying Mercury’s flamboyant, larger than life stage presence. Also starring are Ben Hardy, Gwilym Lee, and Joe Mazzello, embodying their counterparts Roger Taylor (drums), Brian May (guitar), and John Deacon (bass), respectively.

While there have been criticisms that the movie suffers from historical inaccuracies, if you aren’t a Queen superfan who would catch the specifics, it is entertaining to watch the band come up with their greatest hits and evolve throughout their rise to fame. For those die-hard Queen fans who may have wondered about the tiny farmhouse they wrote “A Night at the Opera” in, they can now see Roger Taylor and Brian May fighting over the song “I’m In Love With My Car” at breakfast. History in the making, am I right?

I also appreciated how the film doesn’t shy away from Mercury’s struggle with his sexuality. This important part of his personal life was crucial to his story, and seeing this journey helps to humanize him. The film also focuses on the relationship between Mercury and his manager, the film’s antagonist Paul Prenter (played by familiar Downton Abbey face Allen Leech), who sets him on a path that ostracizes him from his band mates. After his former love and lifelong friend Mary Stuart shakes him out of his exhausting, party-filled solo career attempt, he reunites with the band, finds a man who’ll make him happy, visits his parents, and performs Live Aid in an extremely condensed happy ending for the singer.

To prepare for the role, Malek spent months taking piano and singing lessons, as well as working with a movement trainer to perfect his dance skills so that he would be able to come up with the improvisational, Mercury-inspired moves on set.

In addition to extensive preparation, Malek’s performance was aided by something unusual: a set of teeth that mirrored Mercury’s exaggerated overbite. Although difficult to wear, Malek has said in interviews that this addition pulled him even farther into character.

However, Malek doesn’t need glitter bodysuits or dentures to pull off a terrific performance. The Egyptian actor is best known for his performance as Elliot, a morphine addicted hacker in the inventive TV series “Mr. Robot”, one of my personal favorite shows, which earned him a Golden Globe nomination and Emmy award. He is also known from the family favorite “Night at the Museum”, in which he portrays King Tut alongside Ben Stiller in all three movies from the series. In his second Golden Globe nominated role as Freddie he is a shining light, whether it be his genuine, masterful acting that brings humanity to the icon, or the over the top concert scenes in which he embodies a true rockstar.

Yet despite Malek’s performance, the film suffers from the lack of a single guiding vision, with Dexter Fletcher stepping in for the former director Bryan Singer in the last two weeks of the shoot. While the details of this switch haven’t been made public, it has been described as a messy affair. Some of this messiness leaks into the scenes, many tonally at odds with others.

For example, when Freddie is being grilled at a press conference, his world is sent into a blur, assisted by a flurry of camera movement and what seemed to be a fisheye lens. I thought it was an interesting cinematic move, however, it didn’t make sense in the already established tonal context of the movie. In this same breath, although I did love the concert footage itself, I found the transitions that sent Mercury’s silhouette flying across the scenes in neon colors tacky and unnecessary.

Overall, “Bohemian Rhapsody” is what I would describe as a fun movie. Especially if you are a Queen fan, the costumes will leave you stunned (and so will the wigs), and the music will have you dancing in your seat as the band creates and performs favorites like “Bohemian Rhapsody,” “We Will Rock You,” and of course, the iconic Live Aid performance that’s recreated almost shot for shot in the last 15 minutes of the movie.

Whether you’re a Queen fan or not, head to the theaters and see “Bohemian Rhapsody” before it leaves, because I can guarantee that rocking out in a theater will be a better viewing experience than at home on your Chromebook. Some things that are undeniably grand, like Freddie Mercury, are just better on the big screen.