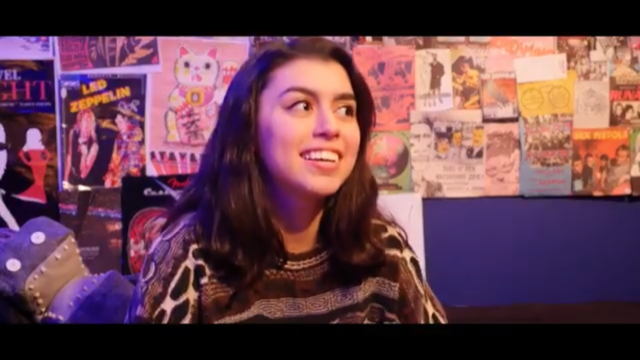 Maddi Jones gave us the best Christmas gift when we went and interviewed her for this article: teeth.

On her bedside table you can find loose worms, a mouse skull, and a turkey (or duck) bone. Her fascination with collecting came from her parents, especially trips to her lake house.

“I would always catch crayfish and look for weird stuff like bones in the woods at my lake house with my dad… on my mom’s side of the family a lot of the girls like my aunts are witchy, super spooky and into this stuff, so I think I took a little from both sides of my family.”

If you have a phobia of bugs, Maddie’s collecting would not be for you – she keeps worms, bees, and crickets in her room and has either caught them in the wild or purchased them from the local Petco.

“I’ve caught a lot of bees and wasps in the last year, that’s another thing I’m really into, catching bees with my hands. I think that they can sense fear, because they don’t really sting me.”

In addition to her collecting, Maddi is heavily involved with music both at York and with outside programs. She’s been playing guitar for about five years now, starting at the School of Rock uptown.

“I played Summer Fest a couple times, and I went on a tour this summer for School of Rock so I played Lollapalooza, and that was really cool. I got to hang out with Rex Orange County… and I got to go backstage with all the artists for all the shows – it was really fun.”

Although Jones started playing music because she comes from an artistic family, she’s stuck with it and joined classes like Music Production to create her own music. In addition, her music has helped her overcome her personal fears.

“I have a lot of stage performance anxiety, so I really wanted to stick with that and get over it. It’s something that you always have that you just keep coping with, and I’ve had a lot of experiences performing in bands that have helped me cope with it and taught me how much I can handle stuff like that.”

Jones uses her music talents both onstage and offstage, Music Production teacher Mr. Gemkow giving her opportunities within school to cultivate her own music.

“I take all the music production classes and I’m really close with Mr. Gemkow, so we have a deal where I take a music production class but instead of completing an assignment every two weeks, I’ll work on my own stuff with my own time limit because he knows that’s what works best for me.”

As well as music classes, Jones is in the Amateur Musicians Club, a club that meets after school and allows students to come together and share, create, and perform music. On her own time, she listens to musicians like Frank Zappa (“he’s such a weirdo”), Jeff Buckley, Led Zeppelin, jazz, Halloween sound effects, and when she’s in the car, static.

After York, she hopes to study music therapy because she’s drawn to both music and social work, and has found a way to combine her two interests. With her bugs, her music, and her tendency to help others, she’s sure to rock the world.