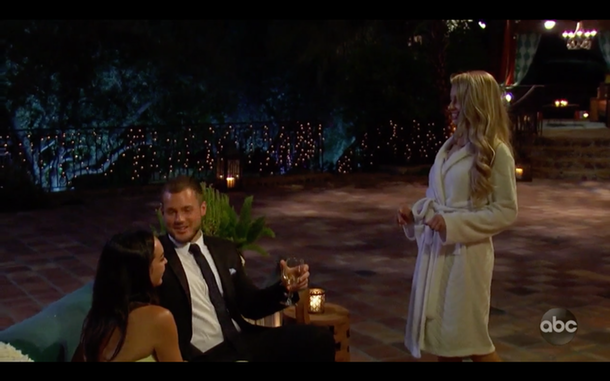 Bachelor episode 2: ABC pulling out all the stops!

The second episode of The Bachelor kicked off with a personal vlog-like video of shirtless Colton describing what would entail on the first Group Date–hopefully some drama and of course a group date rose!

Chris Harrison arrived at the mansion with the first date card which included Demi, Bri, Tracy, Elyse, Hannah G, Nicole, Catherine, and Oneyka. The girls met Colton outside a theater in LA. Inside Megan Mullally and Nick Offerman (Karen Walker from Will and Grace and Ron Swanson from Parks and Rec) were there to offer some comedic relief on the first Group Date. The girls ended up sharing stories about “firsts” in front of 200 people. Colton kicked off the performance with a story about how he told a veteran on his football team that he was a virgin.

Elyse joked about always dating an older guy (even one 13 years older–CREEPY!) Nicole compared Colton to “white bread”–surprisingly accurate. Oneyka threw some shade at Catherine’s steals from Night One; Catherine dished it right back after improving her story, saying, “I’m a good swimmer.” Drop the mic! Demi was saved for last and ended up going in for a cringey kiss from Colton.

After the performance, Demi stole Colton first AGAIN, and the other girls were outraged. (Don’t hate the player, hate the game.) Elyse was next, and Colton appreciated her for talking about her age and being the older one of the group. ROMANTIC MUSIC and a long kiss capped off their conversations. The Group Date rose went to Elyse (bit of a shocker but good for my girl from Alaska)! 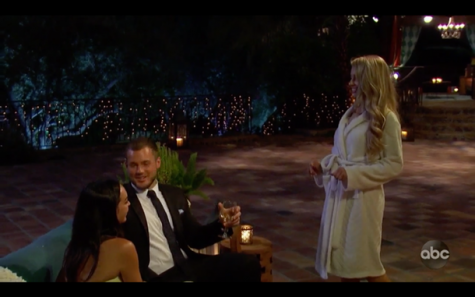 Cassie read the date card which was addressed to Hannah B. (from Alabama) that said, “True love is on the horizon”. Colton was very smiley and described his attraction to her as the couple rode horses and held hands making their way to a remote location. Colton shared an “on the spot” birthday toast as Hannah B. struggled to put her words together– she didn’t forget “Roll Tide”!  Colton began to giving Hannah the rose because she was struggling to open up about her feelings (Cut the girls some slack, it’s only Week 2!). The two spent the nighttime portion of their date on the deck of the Queen Mary, a haunted ship. There were lots of awkward pauses, a struggle for words, and a constant informing from Hannah that it was her birthday. Regardless of the cringiness, Hannah B. opened up and got the rose with fireworks and a kiss to celebrate.

The third date card read, “I Camp fight this feeling anymore”, and was addressed to Alex B., Erika, Tayshia, Katie, Caelynn, Sydney, Kirpa, Nina, Heather, Caitlin, Courtney, and Cassie.  The girls made their way to “Camp Bachelor”, and the party was crashed by Chris Harrison with camp counselor, actor and comedian, Billy Eichner. Red team won the first competition, followed by a victorious Yellow team in a canoe. A tug of war broke the tie, and Red Team won the Camp Bachelor Jamboree. The Yellow team was sent back to the mansion, as Red Team got to spend the night at camp. Katie got the first kiss of the date from Colton. Then Colton stole Heather, and she confessed she was a virgin–Colton’s face lit up.  (Finally not the only one!) The group date rose went to never been kissed Heather. Jokes about “No Boys Allowed” ended the night for the second group date. 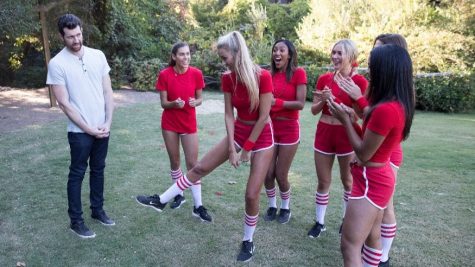 The girls all vied for their time to talk with Colton. Sydney, in a very sparkly dress, got her time ended by Oneyka, in a dress clearly from Windsor, with an air horn. Sydney retaliated with pots and pans “to steal him for a sec” back from Oneyka. Demi, sporting a robe and heels, interrupted Tracy’s time leaving Tracy to her wine glass. (Get it together, Tracy!) The only other notable thing of the night was Elyse saying “Paper. Rock. Scissors”. (Good thing she has a rose, I would have sent her home for that!)

With majority of the girls getting no screen time after Tracy’s tears, the rose ceremony was a toss up. Demi was “thrilled to accept the rose” and her “nemesis” Tracy received the much agonized over final rose. Colton cut his 23 girls down to 19 as Bachelor Nation said goodbye to Annie, Alex B., Angelique, and Erika.

The promo provided viewers with a shirtless Colton, lots of kisses, pirates fighting, a Bird Box challenge, and a pool party.  Tune in next week for my recap, and fingers crossed, Colton jumping that fence! 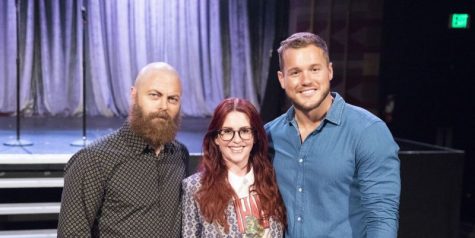