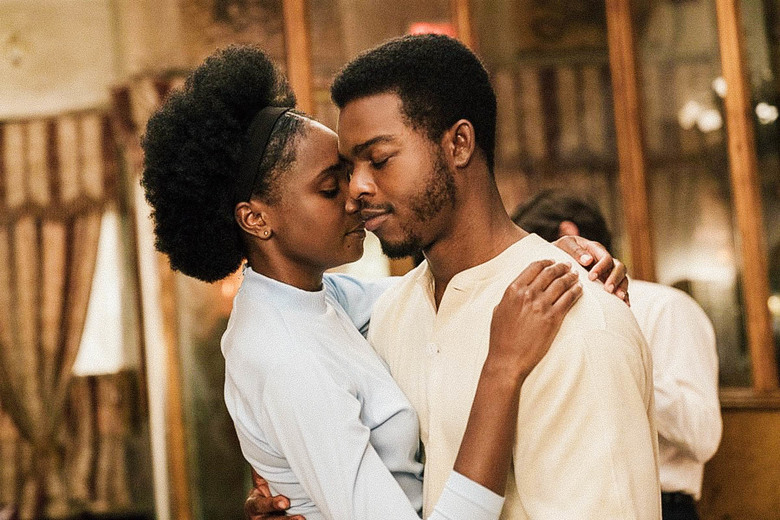 “If Beale Street Could Talk” is a timeless tragedy

When the lights fell in the movie theater and “If Beale Street Could Talk” started playing, it was like a fairytale. Two lovers walk hand in hand, perfectly in sync, with complimentary blue and yellow outfits that mirror the clear sky and golden flowers falling off of the trees above them. Adapted from the eponymous novel by James Baldwin and directed by Barry Jenkins, the film is both a tragedy and a real life nightmare for too many African American men who face the injustice of the American legal system.

The two lovers described above are Alfonzo (Stephan James) and Clementine (KiKi Layne), endearingly nicknamed “Fonnie” and “Tish.” While we see their lives unravel, Jenkins also takes us through the story of how they fell in love. Every ounce of this film needs you to know that they’re soulmates; their first date is peppered throughout the film, Jenkins utilizing long, drawn out shots where time slows and they each take center screen to further the dreamlike aspect of their intensifying relationship.

While Fonnie and Tish are understanding and loving, the world around them is not. Fonnie is wrongfully accused of rape, arrested by a racist cop who had previously accused Fonnie of assault.

While Fonnie is behind bars, Tish finds out that she’s pregnant, telling Fonnie through the cold prison glass that they’re having a baby. Tish’s biggest advocate is her mother Sharon, played by Regina King, supporting her throughout the ups and downs of her pregnancy. Because of Tish’s condition Sharon travels to Puerto Rico in her place to plead to the victim to reconsider her testimony against Fonnie, strength and compassion radiating from King’s strong performance.

Because the film jumps through various elements of the story, Tish narrates to help the audience build a complete picture of the events. Her voice is a calming guide through the tumultuous series of events, matching the brave face that she puts on as she works at a perfume counter throughout her pregnancy to raise money for Fonnie’s legal advice.

KiKi Layne and Stephan James are perfectly suit both their characters and the story; their chemistry off the charts and their large screen presences enveloping the big screen. They are able to convey both the innocence of young love and the tragedy that befalls their lives as the cruel world becomes their biggest antagonist.

When I was researching the movie, I came across a headline that said that the filmmaking was “poetry,” and I couldn’t describe it better. In a scene that stood out to me, Fonnie, a sculptor, lays in his prison bed daydreaming about carving a piece of wood. He’s back in his apartment with cigarette dangling loosely between his fingers, the smoke dancing around the artist and his subject as the camera circles them. Moments like these come together to form a stunning tapestry of excellent storytelling.

Acting, directing, and plot aside, what struck me the most was an element that I had never respected as much as I did during this film: the score. Written by Nicholas Britell, it underscored the plot perfectly during both the tragic and the romantic moments of the film, and drew me into the smooth 70s aesthetic.

“If Beale Street Could Talk” was one of the most beautiful movies I’ve seen in years, both for the tender romance and for the light shed on the injustice that befalls many African American men and their families. In the final scene Tish and her son, now six or seven years old, meet with their father in a prison lunchroom. Alonzo Jr offers his father a buffet of vending machine snacks, and the family says grace, holding hands around the array of Twinkies as cops look on, like circling sharks. And somehow, at the end of so much hate and suffering, the love that this family is able to maintain in the worst circumstances is the most moving and tragic moment shown on screen.