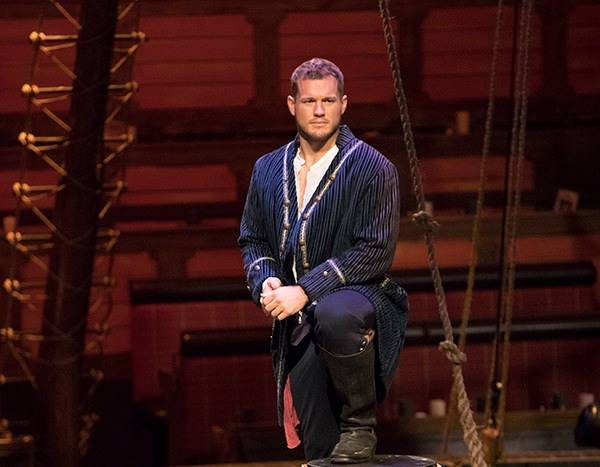 Bachelor episode 3: arrrrr you ready for another recap?

Week three kicked off with the girls not wanting any more drama after the craziness of week 2.  The want for no more drama means this will be one of the most dramatic episodes in The Bachelor history!

Chris Harrison brought in the first date card that read, “I’m looking for life’s greatest treasure,” and it went to Katie, Heather, Hannah B., Courtney, Kirpa, Tracy, Demi, and Caelynn. Both Miss North Carolina and Miss Alabama landed on the same group date, so you know the drama will ensue.

The girls made their way to this stage with a pirate ship and Captain Colton in search of “love”. The date would entail a series of basic pirate challenges in costumes, and the two best pirates would compete to save Colton and win his heat. (Yikes ABC! Out of normal date ideas already?!)

The first challenge was very similar to jousting, and Hannah B. CRUSHED this.  The girls who went against her didn’t even try after a while. Colton and Caelynn were interacting and this drove Hannah B. crazy.  She said, “Didn’t come here to compete in another pageant!”, but with ballgowns, bikinis, and a killer host, The Bachelor isn’t too far off from Miss USA.

Caelynn and, shockingly, Tracy are the winners of the pirate challenges and these two get to compete for Colton’s heart. Demi hated on Tracy while Caelynn was booed by Hannah B.. Ultimately, Caelynn saved Colton and the couple shared a quick kiss to celebrate. 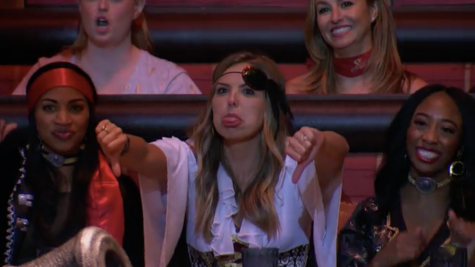 The girls were very nervous going into the night portion of the date in this retro antique shop that I swear was on Rachel or Becca’s season. Colton gave us another toast as if he didn’t learn from his date with Hannah B. toasts are not a good idea. The two pageant girls were very overhyped and Katie stole Colton first and the two joked with each other and seemed like they shared a genuine connection.  Talking about how much they have in common (as if everyone doesn’t love food), they were very close but Katie only landed some romantic music and a kiss on the cheek.

Meanwhile, Tracy and Demi butted heads over Colton’s “type” and him not being comfortable dating older women.  Demi actually used the phrase “Cougar Club” to describe a woman in her early thirties (Early thirties women are ABC’s demographic–don’t make them mad Demi!) Demi’s voiceover played throughout almost the entire date until she stole him away from Courtney, and did some things with Colton that I do not wish to comment on.

Caelynn and Colton were open and honest.  As they held hands, Colton said, “I like you”.  He gave her a kiss and the couple shared a few laughs. Hannah B. was distraught over Caelynn “not showing her true self” to Colton. So Hannah B. took it upon herself to spill the “truth” about Caelynn to Colton.  She revealed they were friends and roommates at Miss USA, a fallout occurred, and they were put in a high-stress situation and a very hostile environment. Hannah B. shot Colton a bad look and threatened that “if he has feelings for Caelynn he can’t have feelings for her”. Things backfired quickly for Hannah B., but any true fan would know if you spend your time talking about someone else things always backfire.  Colton was extremely upset as they shared a bad kiss to end their time together before he just walked away.

The group date rose went to Caelynn–Colton picked it up in front of ALL the other girls and walked out of the room to give it to her.  Go, girl!

Elyse’s name was on the One on One date card that said, “Love is in the air”. The date kicked off in a limo and then took them to a helicopter ride to San Diego.  Colton and Elyse shared some loving gazes and ended up at Belmont Park, a theme park for just the two of them. Her one on one turned group date with the inclusion of little kids from his charity that let Colton prove how good he is with little kids–thank you ABC for finally showing this side of him!  The little girls tried to steal Colton away from Elyse and gave him some advice: “get her cotton candy”. One little girl even had her first kiss before Heather! Colton stopped Elyse at the top of a roller coaster as they shared a big kiss with a beautiful view.

Elyse stressed over their age difference coming into the same date fearing they were not in the same place in life. The nighttime portion of the date went down in the Los Angeles Theater as the couple shared some personal experiences.  Colton complimented her “confidence” and “independence”, as she explained how she lost her sister to cancer during pregnancy. Elyse’s family created a new charity in her honor called Sarah’s Closet, and Colton touched on his work with kids with Cystic Fibrosis. Elyse got the rose after she opened up to explain the way she is, and Colton was very excited about their future.

One more surprise ended the night while a band named Tenille Arts sang a song for the couple as they danced on an elevated platform. (Classic The Bachelor move a hole in the wall band and lots of random people videotaping the couple dancing).

The last date card went to Tayshia, Nina, Catherine, Sydney, Oneyka, Cassie, Nicole, and Caitlin, and it said, “For every strong man, there is an even stronger woman”. The girls met a shirtless Colton working out with tire flipping and ropes. I think at one point he was wearing a sleeveless sweatshirt (the same as the one from Bachelor in Paradise).

Colton and the girls were greeted by Terry and Rebecca Crews (Actor/Former NFL Star and Actress/Singer) as they explained the premise of the date. Bachelor Nation learned Catherine had a black belt and did karate for ten years (What can’t this girl do?!) After a quick warmup, the girls were taken outside to compete in the Bachelor’s Strongest Woman Competition. Oneyka kicked it off pushing a 100-pound wedding cake down the aisle. Next was Nicole, who was all fun and games until it came to pushing the cake which barely moved an inch. Catherine kicked butt flipping an over 150-pound tire as Sydney matched her pace. Last was the Limo Pull which Tayshia really struggled with.  Somehow Caitlin managed to pull the limo (maybe someone was pushing it), but she definitely caught Colton’s attention. Heavy Heart was the final competition with Sydney, Catherine, and Oneyka. Carried a heavy weight ball back and forth before placing it on a pedestal. Oneyka won and celebrated with the infamous quote from Ricky Bobby: “If you’re not first. You’re last. ” The celebrating was cut short as Colton leaned in for the cheek kiss (Rough)! 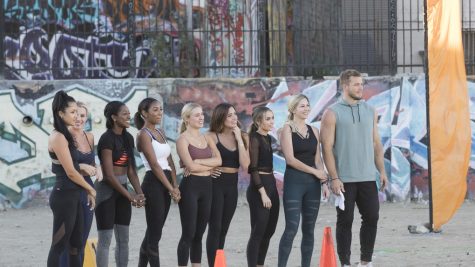 Photo courtesy of Elite Daily.
The girls and Colton waiting for the competition to start.

The nighttime portion of the date had Tayshia and Colton sharing a kiss and a paranoid Caitlin. Nicole shared about her Grandma who fled from Cuba, and she shed a couple tears as they held hands and kissed. Oneyka was rewarded with the cake from the challenge, and Colton talked about her “contagious energy”.  Caitlin’s relationship was falling behind romantically, and the conversation between her and Colton proved that. She second-guessed herself a lot and couldn’t develop her relationship on a deeper level. COLTON SENT HER HOME EARLY! Caitlin was not having it as she didn’t even hold his hand as he walked her out (Can you blame her though?!)

The group date rose went to Nicole to end the night.

Chris and the girls talked about Caitlin going home the night before, and the traditional cocktail party changed to a pool party.  I don’t know if a pool party was the best idea because the girls did not want to get their hair wet. Hannah G. finally got her time with Colton; he was very “confident” in their relationship as they shared a passionate kiss. Caelynn and Colton walked right past Hannah B. and Heather gossiping.  Hannah B. talked about some monster/beast coming out as Heather hyped her up. Which girl is manipulative? Which one is toxic? Where’s the clarity, ABC? If seriously do not know which girl is in the wrong here, how is Colton supposed to? Colton confessed to producers that he didn’t know who to believe and he liked both of them.  Chris Harrison swooped in to try and mend the situation as dramatic music played into the commercial break.

The Miss America feud prohibited half the girls from talking with Colton during the pool party, so a few spots were not secured going into the rose ceremony. The final rose went to Hannah B. as Bachelor Nation said goodbye to Nina, Bri, and Catherine.

The promo provided all the ladies in Singapore, bungee jumping, lots of kissing, a leech, and some more Hannah B. and Caelynn drama. Courtney threatened going home after there was more drama with Demi.  Tune in next week for a recap in Singapore!