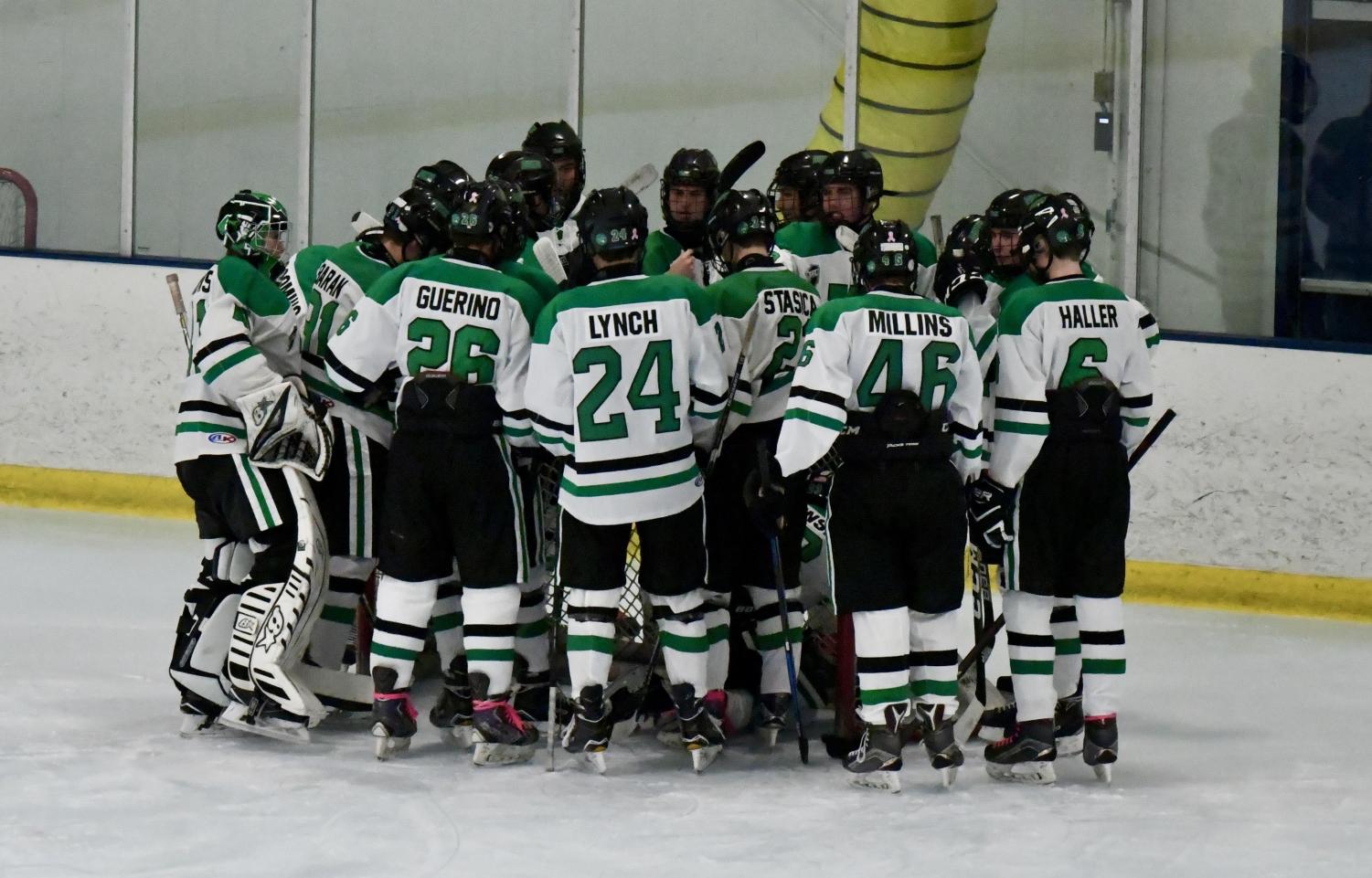 The team gets motivated in a pregame huddle before a high intensity game. (Photo courtesy of York Hockey)

The team gets motivated in a pregame huddle before a high intensity game.

York Hockey looks to up their mental game for postseason

Three years ago, York Hockey joined the Scholastic Hockey League (SHL), Illinois’ most elite and exclusive high school hockey league. Since then, both the varsity and JV teams have excelled at an intensity never reached before. Time and time again proving they can compete with Illinois’ top high school programs like Glenbrook North and Loyola Academy.

This regular season was one to be noted. Varsity ranked eighth in the state, while JV finished third in the SHL– both record-breaking accomplishments for the hockey club. In addition, head varsity coach, Bruce Turpin, was awarded SHL Coach of the Year while seniors Billy Paschen and Chris Lee have been selected for the SHL all-star team and the Amateur Hockey Association Illinois (AHAI) all-state team, all of which are major milestones. However, the hockey club doesn’t plan on stopping there.

“This team is driven to win,” Turpin said. “We pull motivation from being an underdog, giving us a little chip on our shoulders. The North Shore teams always seem to get all of the glory, but we feel we have the talent and the community to compete with the best of them.”

Loyola Academy, ranked second in both the SHL and in the State, and Glenbrook North, ranked third, are two high-level opponents the team has battled throughout the year. Sealing the number four spot in the SHL at the varsity level, York consistently competed in very close games with these teams during the season, losses often coming only in the final seconds of the game. Yet, time and time again the team has proven they can compete at a high level of hockey.

“This season has had a lot of ups and downs, but the boys are on a roll right now just in time for playoffs to start,” senior forward Tyler Bare said. “There is a lot more camaraderie this year, and the team is doing everything better as a result of it.”

A main focus for the team this season has been centered around limiting mental mistakes and staying disciplined. Last year, the varsity team repeatedly faced tough losses that many thought they should’ve won.

“Our previous season wasn’t so good,”captain defenseman Chris Lee said. “This year, we actually made the league playoffs and our team has lot more depth and winning mentality. I would describe this season like a roller coaster ride. We’ve had our not so good moments, but we knew we had to just move on to the next practice or game.”

A big contributor to the team’s success has drawn from the large senior class. They have been able to motivate the rest of the team.

“Senior captains Chris Lee and Billy Paschen help drive the character of the team through their hard work and effort in practices and games,” Turpin said.

Despite their perseverance and determination, the team still has their toughest challenge to face in front of them– New Trier Green. New Trier has one of the strongest high school hockey programs in the state. They field four varsity teams, one JV team, and are one of two high schools in the state to draw girls entirely from one school. New Trier is a powerhouse, and New Trier Green is their number one team. They are a force to be reckoned with, and, if York advances to the next round for either state playoffs or SHL playoffs, they will have to face them. If they want to make it to either championship, then York Hockey is going to have to give it all they’ve got.

“They have had our number this season, so we have our work cut out for is,” Turpin said. “We have the talent to make a push. We just need to overcome some mental hurdles to take the next step.”

Another crucial component to the team this season has been the goaltending. This season, the club faced a shortage of goalies, only taking three goalies for both teams in comparison to five last year.

“Our goaltending has been solid all season long,” Turpin said. “Sophomore Thomas Wesolowski has played every minute for us this year and has been terrific. We look for him to keep to be a stabilizing factor for us throughout the postseason.”

Wesolowski is currently the only goaltender rostered on varsity, but he has stepped up to take on the vital role he plays for the team. Goaltending is a major component to any hockey team’s success– it can make or break the dynamic.

“One challenge has definitely been adapting to the quality of shots that I face, and the upped game intensity compared to JV last year,” Wesolowski said. ”Another challenge is the sheer amount of games that I have played this year. This is the first time that I have ever been the only goalie on a team, so I have had way more games than I have ever played before. As a result, I have had to get into a stricter workout and stretching regiment as well as monitoring my diet more.”

This Friday night at 7:10 pm at Addison Ice Arena, the team takes on Barrington for the third and final game of the SHL playoff series. The series is currently tied one to one but, if they win, the team will advance to face New Trier Green in the semifinals.

On Sunday, Mar. 3 at 4:20 pm, they play Benet in their first state playoff game at the Edge in Bensenville. The dream for every varsity team is to make it to the state championship game– played under the lights of the greats, right at the United Center. York recognizes if they maximize their drive for the prize, they can achieve this tremendous opportunity.

“We need to maintain consistency in our effort and level of discipline,” Turpin said. “We believe we have the ability to make a deep run into league and state playoffs, but we must find a way to master and control our effort.”