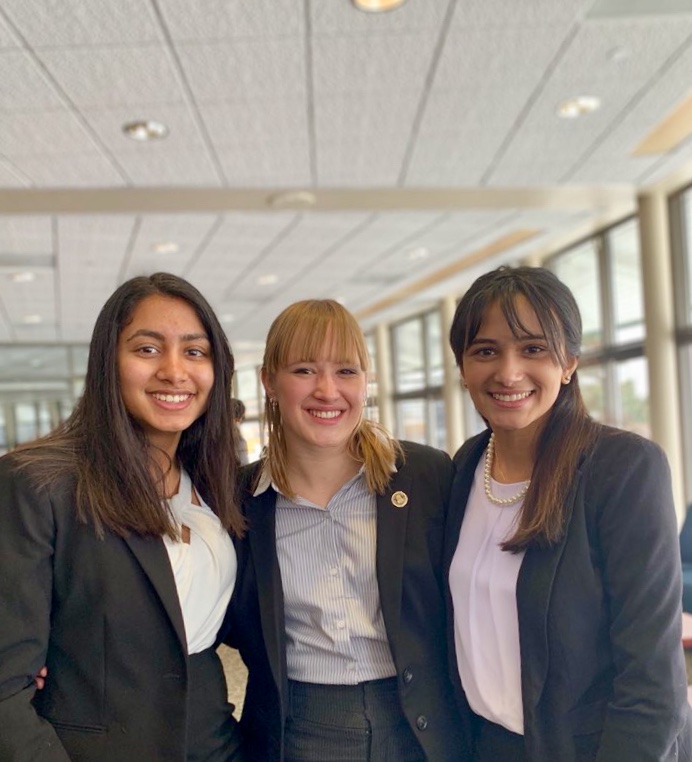 Order in the court

Meet the captains, responsibilities, and rewards behind one of York’s most successful teams.

From inside jokes about a purple silk robe to stories starting with “remember when…”, it wouldn’t take a judge to determine that Law Team is built up of people who genuinely care about each other and the work they do. So, on Tuesdays and Wednesdays, the team fills A294 with laughter and the foundations of a legacy as one of York’s most successful teams. They are working and striving, to carry their unbroken winning-streak through the Feb. 23 competition.

The group is very tight-knit thanks to the endless behind the scenes work the team does with, and for, eachother. For the team captains, senior Katherine Clugg and juniors Lexiene Lukose and Maya Iyer, this hard work has made their team victorious. However, their law team experience didn’t start seamlessly.

“Before joining law team freshman year, I had no idea what I wanted to do,”  Iyer said. “I dreaded public speaking and I was unable to write a proper argument. Law team has helped me strengthen my arguments and public speaking abilities. ”

But two years and much improvement later, Iyer, along with her fellow captains, had a record making season in the 2017-2018 school year; they’re hoping to repeat it.

“Last year was a great year for us,” Iyer said. “We got second at state for the first time in our school’s history, and we’re hoping to place top eight this year. We’ve done well in previous competitions, so it’s quite likely.”

Their ambitious goals require arduous, even tedious, work. On this team, like many others,  progress is a slow, well deserved result.

“We are constantly updating parts,” Clugg said. “For example, I deliver the prosecution opening, and this is the fourth time I have rewritten it. We keep coming up with new ideas to make our team better, that way, when we get to state, we do the best we can do.”

Despite how repetitive and even somewhat unnecessary this may seem to those looking from the outside in on law team, every move the leadership makes is to push their team to perfection.  For these captains, that goal also encouraged them to add a brand new level of expertise and leadership for the team.

“This year, we added a new coach who is a real lawyer for feedback, Mr. Matt Taylor,” Lukose said.  “He has a lot of great ideas which we have been implementing. We are trying for a more creative, unique approach. We are always pushing the boundaries of what can be done during court!”

On Feb. 23, the team woke up to blaring alarm clocks on the brisk, damp Saturday morning. Butterflies panicked in their stomachs. They had to prove and perfect themselves before the fast quickly approaching State competition occurring March 9-10.  They arrived at the Lake County 19th Judicial Circuit Court.

On the ride home, awards sitting on the bus with them made it very clear they’d succeed. A trophy declared them second out of twenty teams. Plaques and prizes, very much earned, punctuated the individual success of four members, two outstanding attorneys and two outstanding witnesses. Perhaps the most intriguing, a 200 dollar check marking the first time York law team has received money to reward their excellence.

Despite the evolving Law Team that has filled its past years with many record breaking moments and new changes, it has consistently been one of the highlights of the captains’ experience at York.

“Competitions are a blast, and as a team, we are super close,” Lukose said. “The work you put into law team most definitely pays off.”