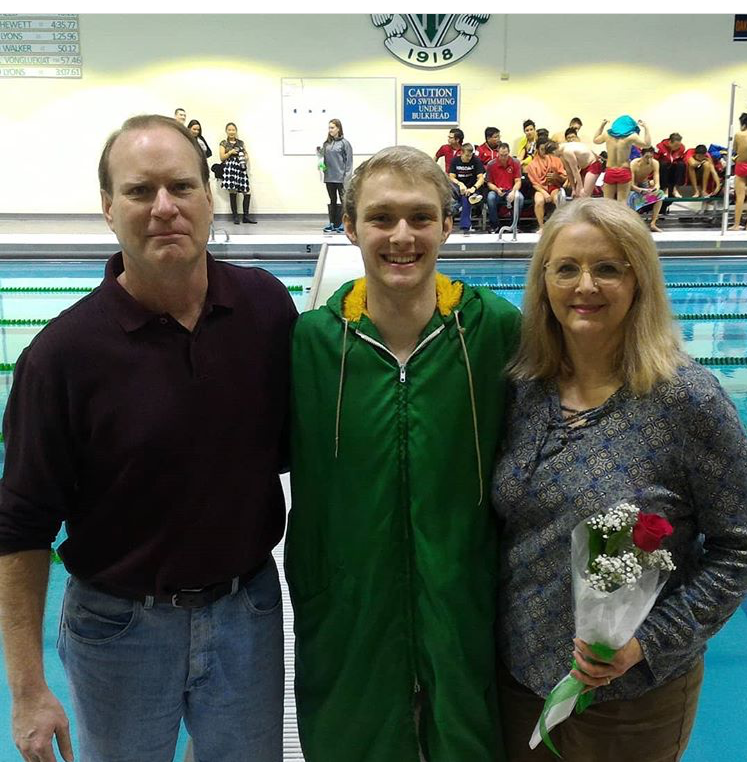 Whether it’s swimming or playing water polo, senior Nick Ward has been found around the pool for his entirety of high school. After four years of being a part of the York boys Swim and Dive team, team captain Ward reflects on his high school swimming career and the bittersweet realization as his last athletic season starts. Ward did not start swimming competitively until high school.

“My family has a long history of swimmers so I’ve spent a lot of time around the pool learning how to swim,” Ward said. “I only started competing my freshman year for York because Coach Davis encouraged me [to]. I had him as my swim gym teacher, and he saw that I was confident in the water. After some resistance and a lot of encouragement from him, I finally joined.”

Coach Davis is often known for persuading students into joining the swimming community at any age or stage of their swimming career, starting them on a path they may have never considered and engraving it into their daily life.

“We spend two to four hours a day, six days a week together working ourselves to be our best,”   Ward said. “That really drives people close, and I love that about it.”

Ward is the kind of athlete who desires to improve, so he regrets not practicing more.

“I really wish that I could have started competitively swimming so much earlier,” Ward said.

Although Ward hasn’t been swimming for as long as desired, in the four years that he has, the sport has made a tremendous impact on not only his physical abilities, but his character as well.

“He is an all around great guy and a super awesome guy to be around,” Ward’s Co-Captain Isaac Marlott said. “Not only is he an extremely hard worker, but he also is a great teammate and leader. It’s been awesome swimming with him the last four years.”

As the swimmers are a ‘family,’ the accomplishments of the team are based off of how well the individual swims.

“My favorite thing about swimming is the culture [of the team], and the way that what you get out of it is directly related to what you put into it,” Ward said. “The team is more like a family, and I felt that from the minute I joined all the way up to my final weeks.”

After several years of competitive swimming Ward finally made it to sectionals concluding his last York season.

“[My favorite swim meet was] Sectionals for sure,” Ward said.  “It was at York this year so that’s an amazing feeling to finish out with a great meet at home, but sectionals has a completely different feel to it. Every emotion is amplified, and everyone knows that this is the moment they have been training for months for. It’s really cool to see that play out.”

the point the motions become instinctual from what you’ve worked on.

“What you put in once you hit the water is all you,” Ward said. “You know immediately that if you didn’t get the result you wanted it’s on you, and I like that responsibility to keep me going through every hard practice [in order] to reach my goals.”

The swimmers complete intense workouts in order to help them make their goals.

“We have a very regular schedule where we have morning practice at six  Monday through Friday and we have a specific workout for each day. Monday is medicine balls, Tuesday- gymnastics room, Wednesday- weight room, Thursday- battle ropes, Friday- med-ball and Saturday yoga, then after school, we swim from 3:20-5:30 every day,” Ward said.

Ward plans to swim frequently, not stopping after high school.

“After high school, I will definitely swim and play polo in some way,” Ward said. “As of right now it will probably be on a club swim team  or water polo team at a bigger school, but I still have a chance at swimming at the Division 3 level. I know both of them will be a part of my life long after I graduate no matter what though.”