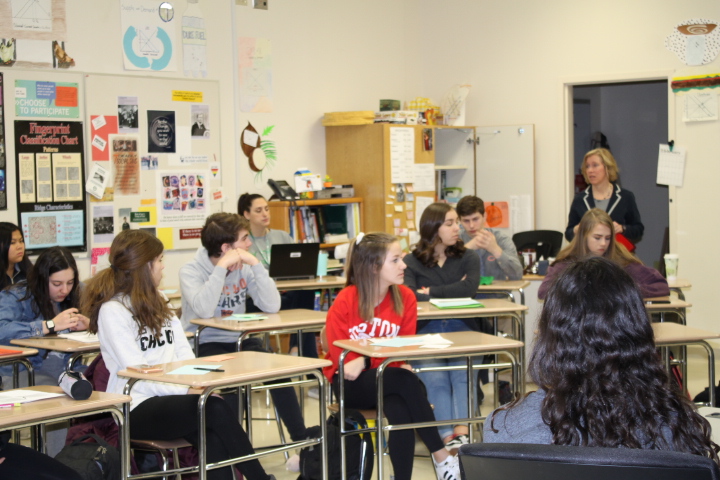 One of the most important issues facing teens and people across the United States is the opioid epidemic. This epidemic contributes to drug-related deaths which are the leading cause of death up to the age of 55. In addition, drugs have been found to play a part not only death but also overall crime. So, criminology teacher Laura Olson wanted part of her focus to be on drugs.

“A lot of theft, child abuse, assault, and murders are drug-related,” Olson said. “So, I took the opioid crisis as a focus of the causes of crime unit.”

The issue was highlighted through presentations in front of the class, with students representing people who were relevant to the conversation about drug abuse. In the presentations, run as mock forums on Opioid Abuse, each student had a different role; there were family members, doctors, social workers, and police officers who each highlighted certain aspects of the crisis that pertained to their respective positions. For example, the doctors described medical treatments for opioid abuse. Mrs. Olson has been doing these presentations for ten years as the “it” drug has shifted.

“As a teacher, you want to be in style and in tune with teens,” Olson said. “So we used to do a unit on meth, but then I phased that out because it wasn’t a big problem anymore. Every year when I get to this unit, I say this will be the last time I need to do it because it’s getting better, but no, we keep needing to do it.”

In fact, the situation is getting worse. This year 70,000 drug-related deaths are expected, and for the first time in history, life expectancy is going down. About 46 people die every day from prescription painkillers, and since 2008, 11,000 people have died from drug abuse in the state of Illinois. In addition, 276,000 children between the ages of 12 and 17 used opioids last year, and in the United States, more than 11 million people abused opioids. These statistics, mentioned by the presenters, emphasized the severity and scope of the situation.

The presentations also discussed ways to fix the crisis at hand. Students who portrayed medical professionals discussed treatments they can offer such as Lucemyra, a drug that curbs withdrawal symptoms and doses of Methadone which reduces cravings.

“With my role as the doctor, I learned a lot,” sophomore Layla Leischner said. “First, I learned about how the doctors by prescribing it [opioids] caused it [the crisis], and that there are a lot of things a doctor can do to prevent that. One of the main problems is prescribing too many opioids, so we can reduce the amount and prescribe alternatives.”

However, the students also presented on ways in which individuals such as social workers, therapists, family members, and peers can help addicts cope with their abuse.

“As social workers, we had to talk about the mental health of everyone,” said sophomore Kylie Levine, who portrayed the social worker. “I focused a lot on kids and education and getting them the help that they needed.”

This aspect of the presentations underscored a not-as-loudly-broadcasted perspective of the opioid crisis. This also highlighted the necessary diversity of treatment for drug abuse.

“What they’re talking about is not one person’s problem or one arm of society’s problem,” counselor Ashley Tucker said. “It’s law enforcement, mental health, and physical health. The families are also involved just like the community and government officials. I’m not sure that in our real world that’s how it’s looked at, and to me, that was what was so great about this presentation.”

Hopefully, with more awareness, the epidemic will subside, and Mrs. Olson will be able to end the opioid unit.

This article is part of continuing coverage on substance abuse and emotional health at York.