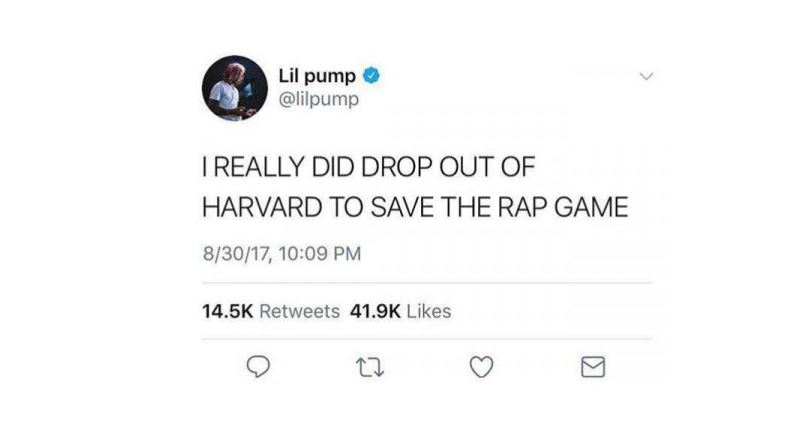 One of Lil Pump's infamous tweets claiming he dropped out of the Ivy League school, Harvard. (Photo courtesy of @lilpump on Twitter)

One of Lil Pump's infamous tweets claiming he dropped out of the Ivy League school, Harvard.

After a cancelled Lollapalooza set, months of release date push backs and a “loss of the album”, Gazzy Garcia, otherwise known as Lil Pump, finally dropped his mixtape album, “Harverd Dropout” on Feb. 22, 2019, much to the excitement of his loyal fan base.

Since the start of his career, Pump has claimed to be a former student of the prestigious Ivy-league school, Harvard, which boasts a mere 5.6% acceptance rate, despite Pump being only 18 years old and having been kicked out of high school in 10th grade for fighting. The speculation of whether or not this SoundCloud rapper is actually some scholastic genius has kept fans and haters alike watching Pump’s every move for any glimpse of the intelligence he claims to be possessing. In fact, there has been a rumor spreading throughout the Internet that Pump will be giving the commencement speech at his alleged Alma mater, and although I know that this is nothing but a rumor, I can’t help but hope that this is true.

I was first introduced to Pump back in 2017 when he dropped his hit single “Gucci Gang”, and like so many others, I quickly became a fan. His carefree attitude and the fact that he was only a year older than me was completely infatuating. His songs were catchy, his image was unique and immediately, I as well as the rest of the world, became obsessed with the man with the Gucci “GG” logo tattooed on his chest.

Despite my love for Lil Pump, I was underwhelmed by “Harverd Dropout”. I expected a lot more from the album with all of the hype that was built around it, but with no general theme, story or message guiding the album, the songs all felt like they were random singles thrown together in an attempt to sell more copies. Pump relies on his signature catch phrase, “Gucci Gang” and the fact that he is a self proclaimed drug addict to carry him through the songs, and after a while, it starts to get old for even his biggest fans.

“Harverd Dropout” in its simplest form is purely a party album; you can’t take it seriously. Just like the rest of his music, Pump intended for it to be something to be blasted at max volume to hype up a crowd of people. There is no substance, purpose, or depth, and despite its features of well established and talented artists such as Kanye West, Quavo and Lil Wayne, not even their contributions can lyrically salvage the songs.

I don’t think the album is bad, in fact, I often listen to many of its songs while driving to school. I enjoy “SoundCloud” and “mumble rap” because I refuse to look in depth at it. “Harverd Dropout” is a fun album to mindlessly listen to, but if you start to analyze it for its lyrical value, you’ll quickly see its flaws. Lil Pump is not supposed to be, nor does he want to be, taken seriously. His music exists as an avenue for people to get hyped up to and have fun with, and when you start to evaluate its worth based off of its lyrics and Pump’s “talent”, you completely ignore its purpose as an album and ruin the carefree fun it offers to its listeners.

All in all, “Harverd Dropout” is not a bad album, but it comes nowhere near the immense hype built up by both Pump and his fans after the long delayed release. As long as you don’t take it too seriously or look to closely at the lyrics, it’s a fun and enjoyable album to listen to.