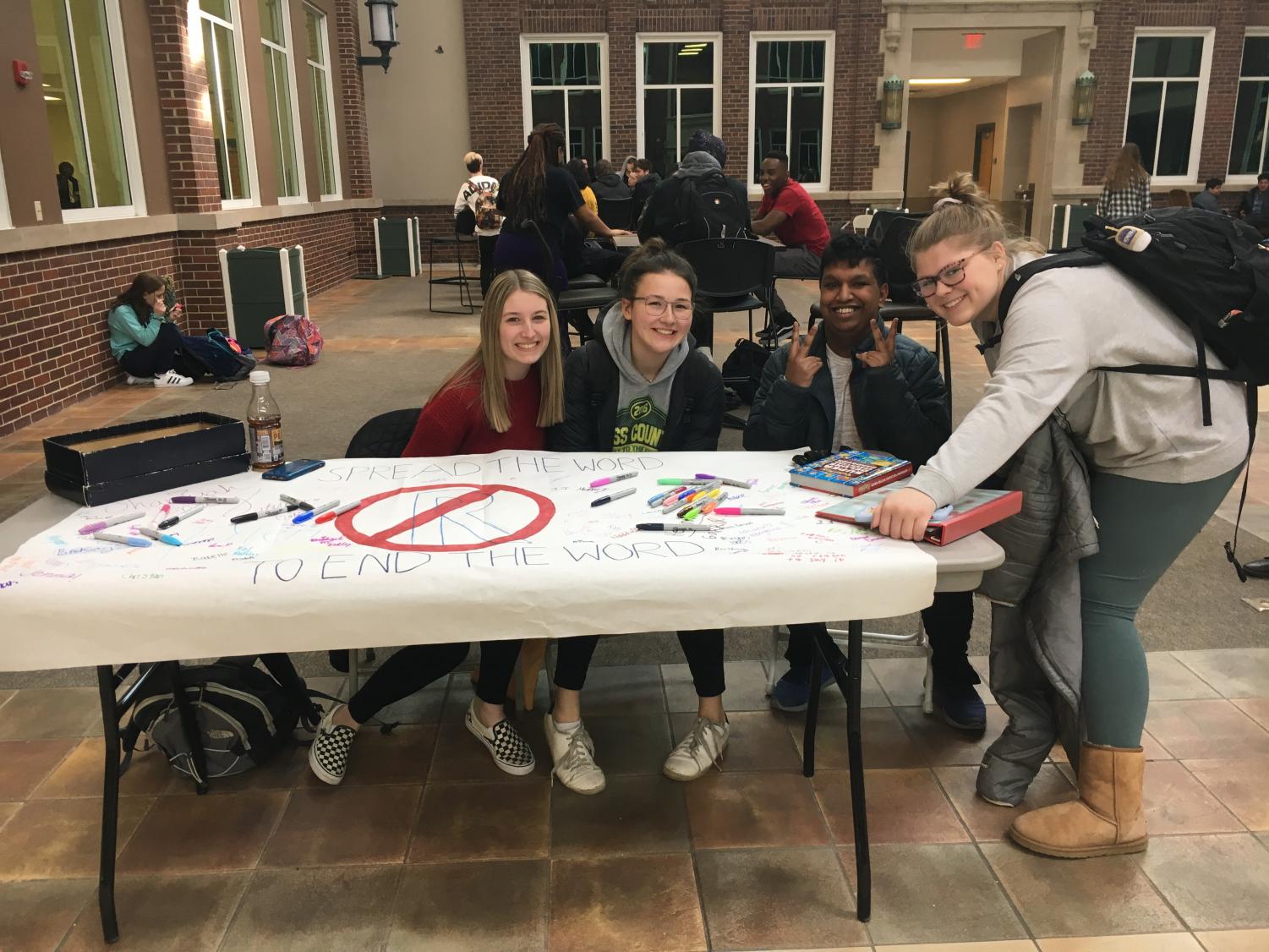 Students and Best Buddies board members (from left to right) senior Delani Kazmierczak, junior Maddy McGreal, senior Cyril Kappen, and Junior Ella Pittman encourge other students to take part in the campaign by signing the banner. (Photo by Isabelle Downey.)

Students and Best Buddies board members (from left to right) senior Delani Kazmierczak, junior Maddy McGreal, senior Cyril Kappen, and Junior Ella Pittman encourge other students to take part in the campaign by signing the banner.

Best Buddies: making a difference one word at a time

Every year, York’s chapter of Best Buddies gives students the chance to sign a banner stating that they will eliminate the R-word from their vocabulary due to its negative connotation. Throughout the week of March 4, Best Buddies members set up and run a table in the commons during lunch periods with the banner for students to sign to join the campaign and purchase bracelets.

Students are encouraged to sign to the banner that will be hung in the commons to make other York students aware of the campaign and of the negative connotations behind the word itself. This campaign helps students to see the bigger picture and remind that the use of a single word can cause exclusion throughout the school.

“The purpose of the banner is to raise awareness of how exclusive, derogatory, and unnecessary the R word is,” senior and Best Buddies Friendship Updates Coordinator Delani Kazmierczak said. “This banner gives students the opportunity to sign the poster and pledge that they will never say the R word. This campaign is very important because it shows respect and support for all of our students here at York.”

The banner and bracelets do not only help bring attention to York’s chapter of Best Buddies, but they also bring awareness to the overarching issue of the use of the R word, helping students realize what its origins are and why people should eliminate it from their vocabulary.

“The banner and the selling of the bracelets help raise awareness about the Spread the Word to End the Word campaign, which aims to end the use of the R word due to its dehumanizing connotation,” senior and chapter President Ben Airdo said. “Signing the banner and purchasing a bracelet unifies York and its students under the beliefs of inclusion and positive relationships between all students–with and without Intellectual and Developmental Disabilities [IDD].”

With Best Buddies being a national organization, York’s chapter of Best Buddies receives a lot of support from administration, staff, and students. The R word campaign has taken place at York in past years and is always a success.

“Last year we sold stickers too, but other than that it’s pretty much the same,” junior and Vice President Maddy McGreal said. “So far, it has been really successful and we’re expecting more people to sign the banner in days to come.”

Be sure to make your way down to the commons to support Best Buddies, join the campaign, and purchase a bracelet for a good cause.