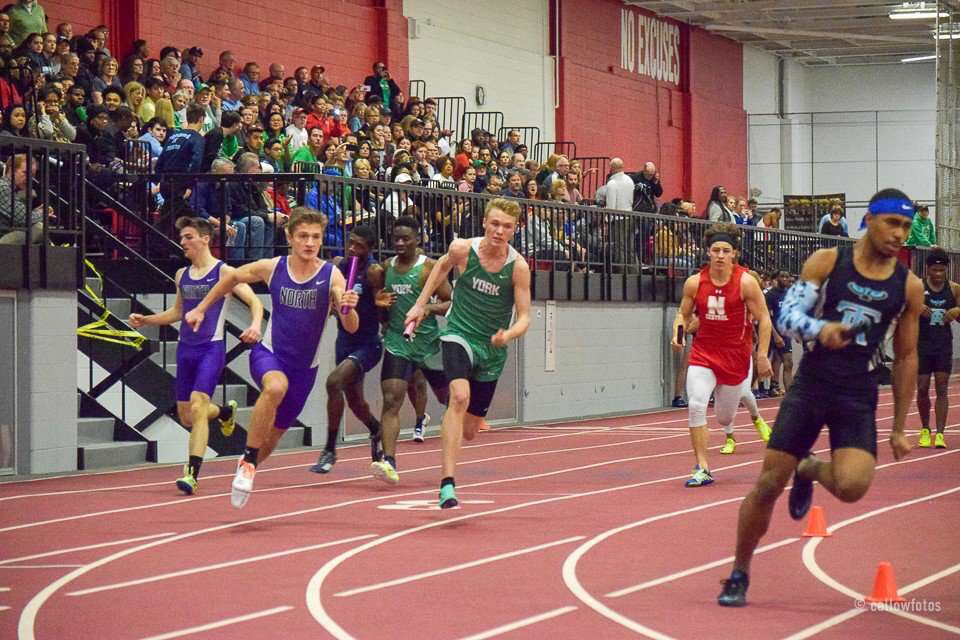 The gun goes off in the Joe Newton Field house and cheers echo throughout the building. Track season is in full swing and the York boys track team is coming together and taking shape.

On Saturday, Feb. 23,  York competed at the 54th Proviso West Invite, one of many competitive indoor meets held in the state of Illinois. At this meet the York track team put together their lineup excluding many key individual athletes who are counted on to score. Despite not running their strongest lineup, the team was pleased to have finished first place in this meet, much better than previous years.

To keep the train rolling, York, a week later, put forth another strong and competitive effort, winning the York Invite on Friday, March 1. While this home turf win did not come easy, York persevered and went the extra mile to outmatch any other team’s strength.

One unique aspect to the York invite is that Both heats A and B heats of the 4×800 meter relay score the same amount of points to contribute to the varsity team score. The advantage York has comes with its depth in speedy 800-meter runners.

“The 4×800 [meter] history at York is rich and many great teams have come and gone,” junior and top runner Daniel Klysh said. “It was a privilege to be able to anchor and be a part of a winning 4×800 team at the York Invite.”

Within the first two relays that opened up the York Invite, the team managed to score 20 points, picking up the momentum and setting a good pace for the rest of the night.

“After seeing [the B heat] win, all I thought was that it was our turn,” Klysh said. “A win for us would mean 20 points to start off the meet which is a huge momentum boost for the team.”

In addition to scoring points in the distance events of the night, field events and sprints were able to score points as well. In order to win a track meet,  it takes the whole team scoring and strong efforts, something that York’s boys’ track and field has excelled a lot in. Not all points have to come from the first place in a race but each event adds up, setting York apart from other teams due to their strength in each event.

“I think some of the cool success is that we’ve scored in almost every sprint event, which we haven’t done in the past,” sprints coach Mr. Sundberg said. “Being able to consistently score in sprint events is huge.”

The success found in recent meets can also be credited to the experience and years these varsity athletes have spent perfecting their craft.

“Having experience in big varsity meets as a freshman and a sophomore have definitely helped me in jumping better throughout this year,” junior triple jumper Kam Stearns said. “As a junior on the team now, I’m just trying to use my experience to help the team out in any way I can.”

As the season progresses, the team looks to continue to show their strength as they head outside for the second half of their season.