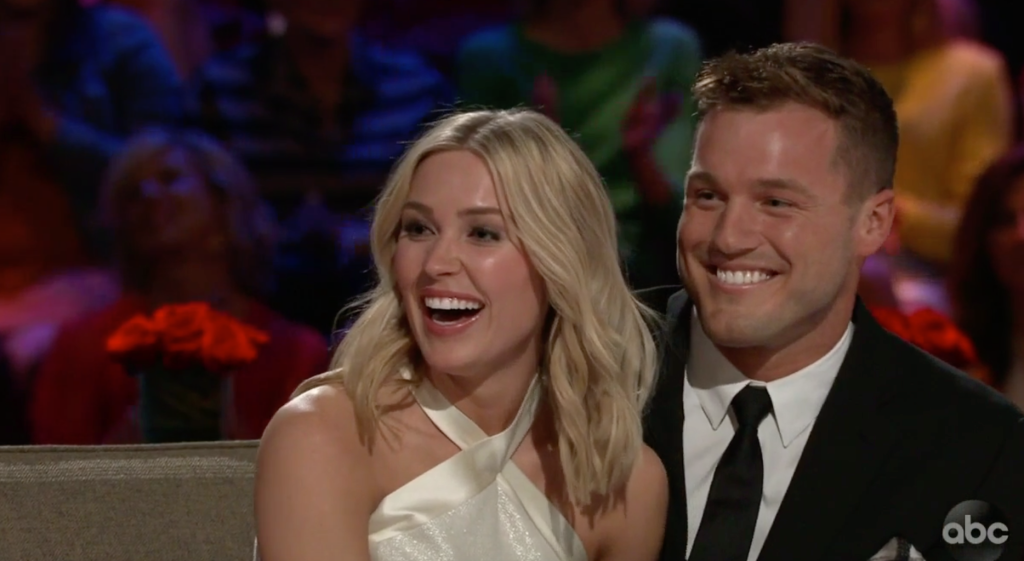 Colton and Cassie make their first public appearance on the "After the Final Rose" sequence of the show. (Photo courtesy of ABC)

Colton and Cassie make their first public appearance on the "After the Final Rose" sequence of the show.

After the scene of bachelor Colton leaping over an 8-foot fence, viewers were left wondering, “Where did he go??” The two-night, two-hour episode began with 20 minutes of Chris Harrison and crew running around the foreign town of Algarve, Spain looking for runaway bachelor Colton. The week prior, Cassie broke Colton’s heart by telling him she wasn’t ready for an engagement after Colton told her “I wanted it to be you at the end of this.”  Then, all of a sudden Colton is running down the stairs, punching a camera, and hopping over a fence (in one swift leap) out into the Algarve wilderness.

After Colton is located, calmed down, and brought back to his hotel room by the crew, he decides he needs to end his relationships with the other women left, Tayshia and Hannah G. Tayshia was pretty easy on Colton when he broke the news that he was in love with Cassie. In fact, Colton was crying more than she was and she ended up comforting him. They parted ways and Colton went on to the next, Hannah G. Ironically Hannah was in the middle of piecing together a scrapbook of the pictures of her and Colton together when he knocked on the door. He told her the truth and it didn’t sit easy, Hannah fired back at Colton, questioned him and expressed her frustration with him up front. After many minutes of Colton quietly crying into his hands while Hannah pressed him, he attempted to console her by saying “I thought it was going to be you at the end of this,” (Is that supposed to help??) Hannah packed her things and left still seeming upset with Colton. The bachelor went from 3-0 women in a span of 24 hours, a new record for the series.

The episode ended with Colton knocking on a door looking anxious, leaving the audience wondering, “Who’s door could he possibly be knocking on? Cassie’s?”

In the second episode on Tuesday, Colton surprises Cassie and asks her if they can talk one more time. He surprises her by sharing that he has broken up with the other two women, and to this Cassie reacts with a smile she tries to hide behind her hand. Colton knew Cassie left him because she wasn’t ready for an engagement even though to be engaged at the end was what he had said he wanted throughout the entirety of the season. He evidently changed his mind when he told Cassie, “I’m not sitting here asking for marriage at the end of this, I’m sitting here asking for another chance.” Cassie accepts this (I think) by hugging and kissing Colton and saying,  “I don’t know what I’m ready for, I feel good right now though.”

Colton invites Cassie to fly with him from Portugal to Mallorca, Spain to meet his family. He breaks the news to his family that they will not be meeting two women as they had expected, and that there was only one, Cassie. He explains the situation with her leaving and him chasing her, and his parents are clearly concerned. Cassie then shows up to meet his family with tears in her eyes as a result of all her nerves. Colton eases her stresses and the family seems to like Cassie, however, they still have their doubts and are scared for a possible heartbreak in Colton’s future.

After meeting the parents, Colton and Cassie go on their last “one-on-one” in Mallorca repelling down a mountain to their picnic set up many feet beneath them. Colton is finally able to get Cassie to open up to him as she shares her story of a controlling past relationship that has caused her to be reluctant in her present relationship. Per bachelor usual, the couple head into the evening dinner sitting by a fire with untouched food in front of them. Cassie tells Colton she has never felt so comfortable and then he invites her to the fantasy suite.

At the “After the final rose” sequence of the live show, Colton and Cassie sit to talk about their plans and life post-bach. Chris Harrison asks if there are any plans on getting engaged and the happy couple admits they have talked about it. “We’re in love,” Colton says, “We’re SO in love,” Cassie says after. “I know it’s the end of this chapter but I’m hoping it’s the beginning of a new one,” Colton says concluding the video showing their time spent together after the show. After surprising the couple with a vacation in Thailand, Chris Harrison announces the new bachelorette… Hannah B!

Wait, not runner-up Hannah G? Most of America was rooting for Hannah G. as the bachelorette, but Chris Harrison shocked America when he announced it was, in fact, Hannah Brown. Chris brings Hannah on and they talk about her upcoming season. Right away it is evident Hannah is nervous and not the best with stringing words together (many awkward minutes of silence.) Chris reveals that Hannah will be introduced to five of the men on her season and the crew sets up a faux mansion in the background. “Um uh yeah, I hope they can put words together better than me,” Hannah says after Harrison asks her what she’s looking for in a partner. Bachelorette Hannah gives her first rose of the season to rapping Cam from Austin, Texas who ends his rap with Hannah’s favorite catchphrase, “roll tide!” Fans on Twitter claimed Hannah is too awkward to be the bachelorette, but others thought her bashful personality makes her more relatable. Nevertheless, nothing will stop die-hard bach fans from watching a season.