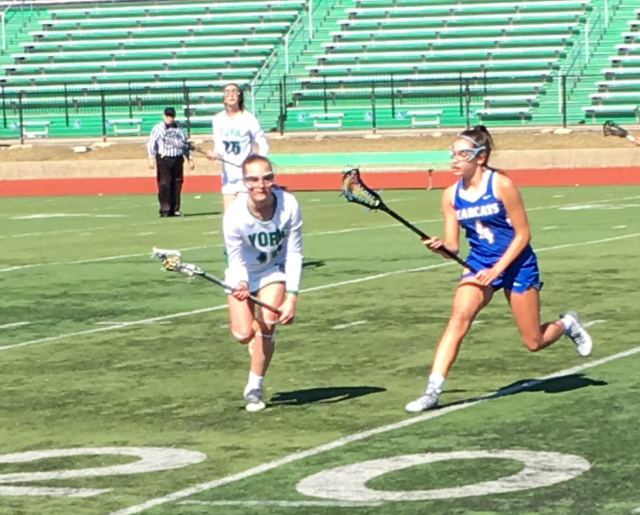 It’s spring time– the weather is getting warmer, the end of the school year is in sight, and the girls varsity lacrosse season is in full swing. The team has been working hard since pre-season in January at the early morning before-school practices. They are now reaching the midpoint of their season with a recent streak of 3 wins, some of which were played in their tournaments located in St. Louis this past weekend. Their overall record is currently holding at seven wins, three losses.

“The only games we have lost were against Hinsdale Central, Loyola, and the Kentucky state champs,” junior Cate Duhig said. “All three of those teams were really good competition and gave us something to work for later in the year.”

Despite these losses, the team is working to fuel competition and learn from their mistakes.

“My favorite part of being on the team is the competitive games we have and winning those games,” junior Sami Kraus said. “Also translating what we learn from practice into game play.”

The team has proved that their work in practice is paying off in games similar to the team’s tournament in St. Louis. A great opportunity for getting some competition, the dukes dominated the field– their first game winning 19-10, their second 18-4.

“We recently went to St. Louis to play the state champs of Missouri which allowed for some great team bonding,” Duhig said. “We went to the city museum and just got to hang out all together for hours on end. [The trip] really brought us closer together.”

With team opportunities like the time spent in St. Louis, the team has been able to become closer on and off the field.

“This season, we’ve really come together and learned that lacrosse is a team sport,” junior Erica Buckley said. “We work hard in practice which is paying off for us this season. Our bond is like a family and [we are] always knowing that we can achieve anything this year together as a team.”

In order for the team to maintain cohesion and a close bond, many girls look to each other for motivation. There are multiple athletes that have been stepping up and becoming leaders this season.

“Some players that I️ look up to and try to take after is, our senior defender Mollie Grasse,” Buckley said. “Mollie is a leader at practice and during the games and keeps a positive attitude throughout.”

Not only have seniors served as leaders for the team, there are multiple underclassmen who have shown impressive skill for being on the varsity level.

“Jenna Hughes has been stepping up a lot this year,” Duhig said. “She is a sophomore and has been scoring goals like no other and has been leading by example in each of our games through her dedication and hard work.”

Looking forward to the rest of the season, the team seems to have high expectations and clear goals to work towards.

“For this rest of our season, the goals are to win the rest of the games and goes as far into the playoffs as possible,” Kraus said.

As this dedicated group has just one month left of their season, they plan to finish strong and maintain a hard work ethic and positive attitude to achieve these goals.

“I love this team so much,” Duhig said. “Being on the lacrosse team is like having a second family. It is so much fun to practice with everyone and to play our fun games at the end of practice. They are just silly games but they bring out our competitive sides and allow us to have fun.”