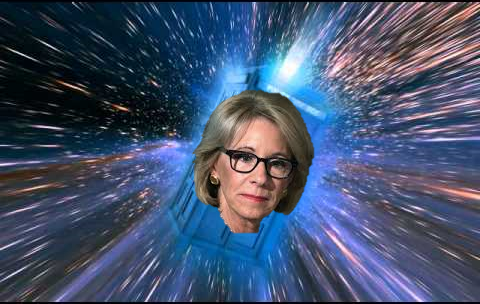 Looks like Betsy Devos will show us how to travel backwards in time. (Photo courtesy of Alex Wong/Getty Images and DISENT)

Looks like Betsy Devos will show us how to travel backwards in time.

Breaking news: Secretary of Education Betsy Devos has successfully created the world’s first time machine. That’s right, the president’s hand-picked department representative, who has often been described as an “ignorant, incompetent, and utterly useless husk of a person”, the “end of public education as we know it”, and a “cross between a Connecticut-based stock photo grandma and a rottweiler”, finally went against the grain and did what no one thought possible: she accomplished something of significance.

This scientific revelation began as a simple idea. Devos believed that improving public education would be unnecessary if teachers could go back in time whenever a student didn’t understand a question. After all, fixing the root of a problem is a poor substitute for just finding a way to delay that problem.

While many were skeptical that someone who’s both heartless and spineless would even be able to stand, much less create a time machine, Betsy Devos has done the impossible: she has found a way to reverse time. Of course, in order to pay for this project, Devos had to cut funding to certain programs. These changes included:

Truly, with all of these changes, Betsy Devos will soon be able to send our nation backward in time, proving that if you can’t teach an old dog new tricks, you just need to have that dog force its older tricks on everyone else.