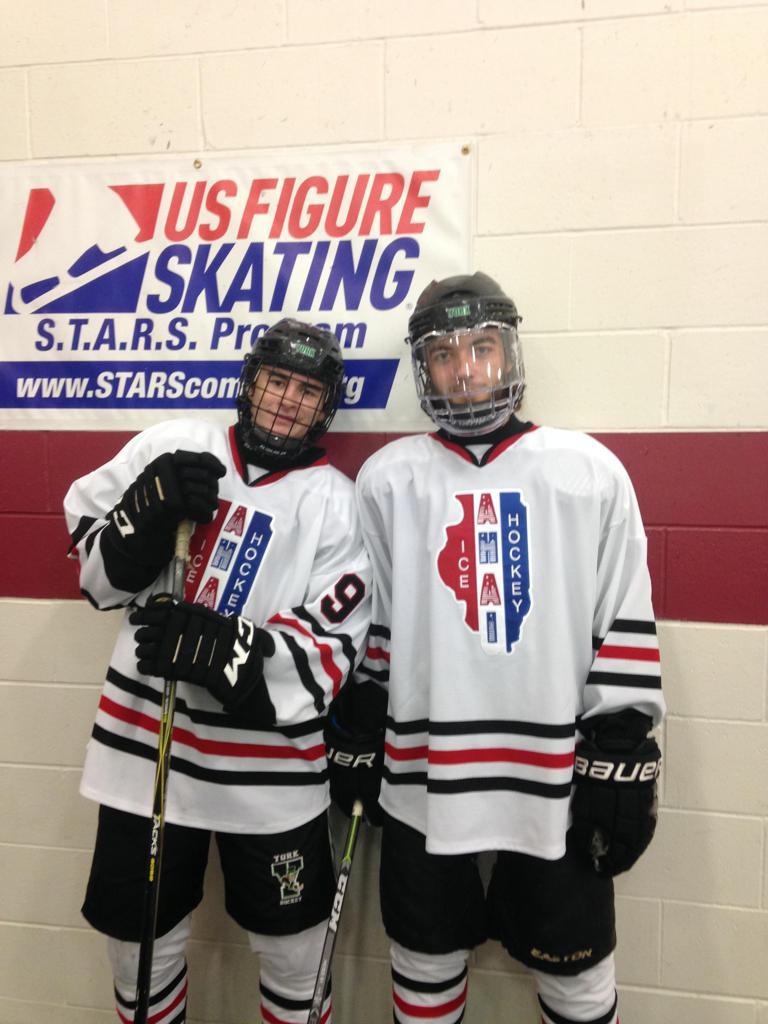 It’s been three years since York hockey has been inducted into arguably Illinois’s most competitive high school hockey league, and, since then, the program has seen great success. This season, JV won the Scholastic Hockey League (SHL) Championship while the varsity team ranked eighth in the state, defeating top competition like New Trier and Glenbrook North. Although, some of the most notable accomplishments stem from achievements by senior captains Chris Lee and Billy Paschen.

Out of over 3,000 high school players, the duo was two of only 20 boys chosen for the Illinois Showcase Team. In addition, they were selected as the 1st team all SHL competing with talent from the top teams in the state and finished as top point leaders in the league. Paschen was also recognized for the Blackhawks Alumni All-star team in which he attended a luncheon with Blackhawks players like Patrick Kane.

“Being on the Illinois Showcase team was a huge achievement,” Paschen said. “Being declared as one of the top 20 high school players in Illinois was really a true honor. Not to mention getting all the way to eighth in the state was a big deal for the program. The effort all of us put in really ended up showing this year, and I’m very proud of our team. It is a year of hockey I will never forget.”

This season was a huge milestone for the varsity team. While they may have not taken home any hardware, what the team did accomplish should not go unnoticed. The SHL is a small, exclusive league consisting only of about seven teams; Illinois’s last six state champions compete here. As a result, York had to really compete in every game they played. This drive brought the team closer than ever.

“This past season was the best season of my York hockey career,” Lee said. “I loved the bond that our team had on and off the ice. We all laughed and had a lot of fun but also focused when needed.”

Perhaps the most notable win came near the end of the postseason. During the SHL league playoffs, York faced their toughest challenge yet: New Trier Green. New Trier is often thought of as the perennial powerhouse of not only the league but the state. Entering playoffs, York had not defeated the Green once, including all regular season and some tournament games.

However, after a 2-1 series victory against Barrington, York advanced to play the New Trier Green in the SHL semifinals. Heading into the game with a chip on their shoulder and a drive to win, York became one of the only teams in the state to defeat Green the entire season with a 5-2 victory. While they heartbreakingly lost the next two series games in overtime then double overtime, they did not go down without a fight. The team proved the program’s worth through their drive and initiative to win.

“We accomplished one of the hardest wins in Illinois High School Hockey, beating New Trier Green,” Lee said. “I know I wasn’t going to leave York without beating them.”

Lee and Paschen played a very big role on the team as leaders and motivators. Their skillful ability and intense competition level helped push the team to the higher levels needed to beat the teams of the North Shore.

“Chris and Billy helped drive the character of the team through their hard work and effort in practices and games.” varsity coach Bruce Turpin said.

The duo’s award recognizing talent roots deep in a drive they’ve inherited to push one other to their fullest potential.

“Billy Paschen has been my main motivator to excel in hockey,” Lee said. “Every time we would go up against each other in practice it’d be the hardest either of us would work in a drill. We would also feed off of each other’s energy in games because we knew as senior captains we had to be the spark that got the team going.”

After winning the Illinois West Hockey League their freshman year, the program’s elite transformation to a top competing program in the SHL can be greatly attributed to this year’s graduating class.

“The feeling of knowing the senior class this year was a big contributor to pushing the program for the betterment was a very good feeling,” Paschen said.