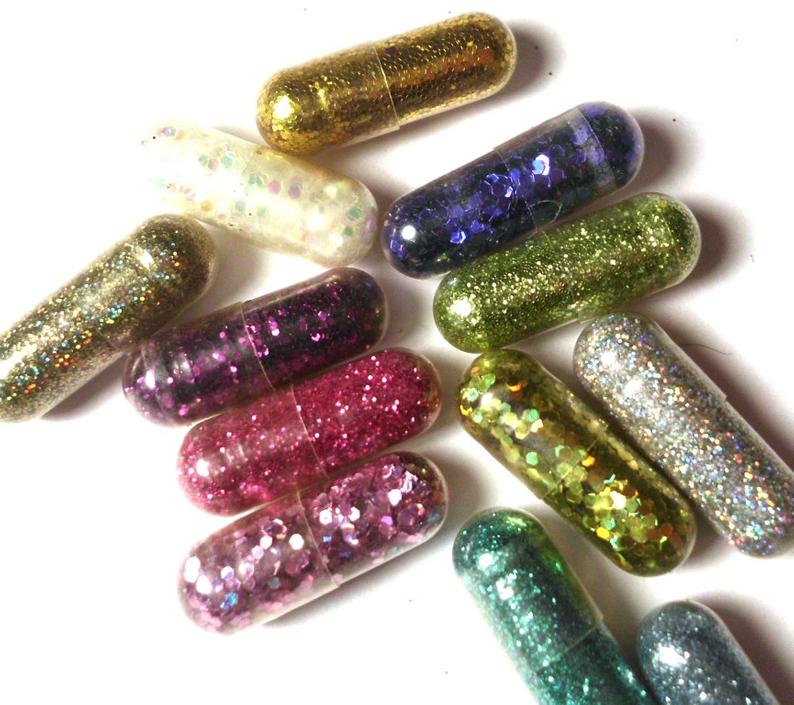 Glitter pills have become one of the forefronts of the “mental illness aesthetic” with pictures of them appearing all over social media and packs of them being sold on sites like Etsy. (Photo courtesy of Etsy )

Glitter pills have become one of the forefronts of the “mental illness aesthetic” with pictures of them appearing all over social media and packs of them being sold on sites like Etsy.

Mental Illness is not glamorous

Stop trying to make it something that it's not

I’ll come right out and say it: mental illness is not glamorous.

It’s not glamorous when you can’t get out of bed in the morning and your mom is pleading for you to go to school. It’s not glamorous at 3 a.m. when you’re crying yourself to sleep, thinking about every way in which you’ve messed up. It’s not glamorous when you look down at the number on the scale, regretting the last meal you ate. It’s never been glamorous, nor will it ever be glamorous.
Mental illness is an ever-growing issue in our society, statistically affecting one in every five people over the course of their life, according to the National Alliance on Mental Illness. Everyone in some way experiences anxiety, sadness or another type of heightened emotion, and no one should be able to discredit what someone else is feeling. The problem arises when people take these symptoms to label themselves with serious mental illnesses and treat them more as an accessory rather than a debilitating illnesses.

Don’t get me wrong. It’s not a bad thing to be open about your mental health, and in fact, it can be really comforting for others to know that they aren’t alone in their struggles. There are many people experiencing these intense feelings and emotions, and for the first time, not knowing any better or out of discomfort, are conveying them in what comes off as an offensive manner.
The problem arises when our society prompts people to believe that mental illnesses are some sort of trendy and cute quirk instead of the overwhelmingly difficult reality they are for the people who have them.

I’ve never understood the cultural draw and romanticization around mental illnesses and the desire to have one. Why would anyone willingly choose to brand themselves with a label that I spend so much of my time trying to hide from the world? How could our society glamorize and romanticize something that caused me and so many others an unbearable amount of pain?
I believe that one of the major causes behind this unsettling trend is that mental illness has become synonymous with receiving attention and special treatment, and in a world overtaken by social media and competing for likes and retweets, anything that garners any type of attention is immediately pounced upon. With the current strides against the societal stigmas around mental illness, such as celebrities opening up about their struggles to their fan bases, numerous chart topping songs being about mental illness and the countless campaigns created, including the ‘world record breaking egg’, it’s no surprise that many people think that having a mental illness is trendy.

The issue is worsened by the profit-driven agenda of fashion giants such as Urban Outfitters, Forever 21 and Zara, who are all culprits of using this “trend” as an easy way to make money. Clothing, jewelry and other accessories with phrases such as “Eat Less”, “Blame it on the Anxiety” and “Obsessive Christmas Disorder” have been appearing in stores across the nation, often times selling out. This troubling reality reveals that with all of the progress we have made to destigmatize mental illnesses, people have started to see it as something desirable and treat these illnesses as a fashion trend instead of what they really are: the dark and scary reality that so many of us have to live with on a daily basis.

I can equate this way of thinking back to a time in elementary school when I was jealous of the kids who were taken out of class for speech lessons. When the speech teacher came to our classroom to collect the kids who would be receiving lessons, I always had my fingers crossed, hoping that he would call my name. One day, when I was talking to one of the girls who was regularly called down for lessons, I expressed how badly I wanted to be called down for one. I can still remember how befuddled and confused she was by my jealousy. She told me how much she struggled with her reading and speaking skills, which made the lessons extremely stressful and frustrating for her and that she was jealous that I was able to read in front of the class effortlessly. I realize now that my want to be in speech classes stemmed from my desire to be set apart and different from everyone else. I wanted the attention and special treatment that came with being in the speech classes, but I didn’t want to have to deal with the stress and frustration the kids in the class faced.

Just like my naive perspective on speech lessons, so many people are uninformed about how serious and debilitating mental illnesses actually are. So many of us view the topic of mental health through the rose colored glasses provided by our society. Characters in TV shows and movies with mental illnesses almost never convey the severity of it to its full extent and their disorders is often used as alluring characteristic rather than a disorder. This false conviction of mental illness reiterates the beliefs of people who think of it as some type aesthetic or trend and causes them to stray further from understanding what the reality of living with an illness or disorder is like for the people actually dealing with it. They like the idea of having something that sets them apart from everyone else; however, when it comes down to it, the negatives outweigh the positives, and they would never truly want to live with a debilitating disorder.

The “having a mental illness is cool” mentality not only portrays mental illness as a lighthearted and desired “quirk” to have, it greatly affects the people who are truly struggling with illnesses. People dealing with eating disorders aren’t taken seriously because many of them aren’t as skinny as the “thinspo girls” (extremely skinny girls that take photos showing off their body in order to “inspire” people in the pro-anorexia community) flooding the pages of Pinterest and Tumblr. Depressed and suicidal teens are brushed off as just trying to fit into the “sad girl” and “sad boy”culture perpetuated by our society. People struggling with Obsessive Compulsive Disorder feel invalidated when their diagnosis is used as an adjective to negatively describe someone’s cleanly or tidy habits.

We must stop the glamorization of mental illness in our society because there is absolutely nothing about it that is glamorous. So many people struggle with debilitating illnesses and disorders they didn’t ask to have, and when people treat it as a trend, aesthetic or fashion statement to be worn as some sort of ‘badge of honor,’ it is extremely invalidating and hurtful for those truly struggling. Breaking the stigmas is essential for the acceptance, support and better treatment of people with mental illnesses in our society, but we must do it in a way that is not exploitative.