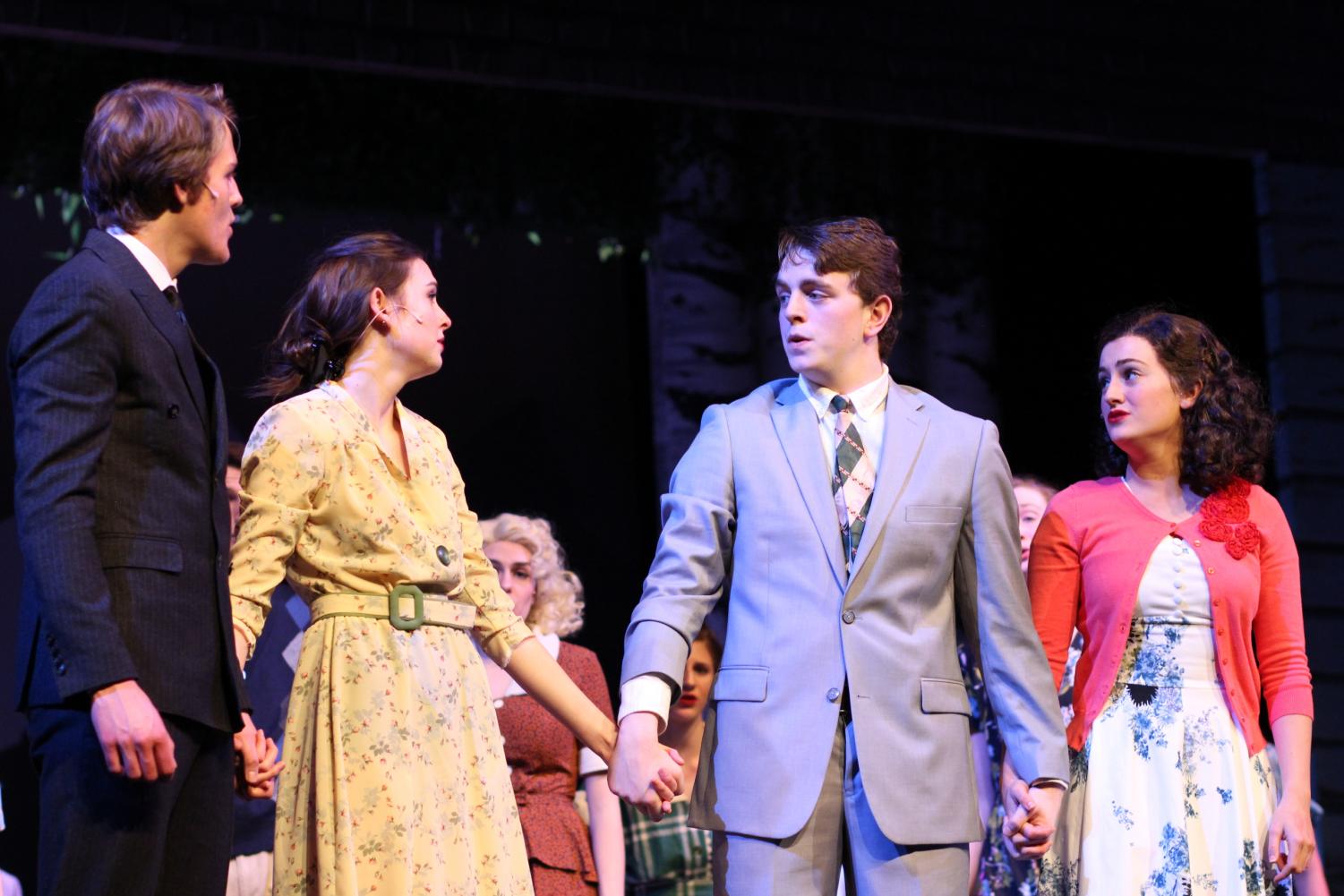 Inspired by the true story of the Iron Mountain Baby, in which an infant was found by the side of a train track and miraculously survived, “Bright Star” follows the life of Alice Murphy throughout North Carolina, first as an editor in Asheville during the 1940s but also as a teen in Zebulon during the 1920’s. A young writer, determined to publish his work in Murphy’s renowned Asheville Southern Journal, Billy Cane, grabs her attention when she reads his pieces about returning home from the war.

In the scene following her first meeting with Billy, Alice returns back to the 1920s, and the audience sees her transformation into a young girl, hopelessly in love with Jimmy Ray, the son of the mayor, who is destined to rule his hometown.

Despite the wishes of their parents, Jimmy Ray and Alice remain together, and Alice becomes pregnant with a child.
Though many students could not relate to the specific situation of each character, a lot of the actors found truth in the emotional struggles of the story.

“Every member of the cast could connect to this show in one way or another,” freshman and ensemble member Rosie Kungl said. “Some just want to follow their dreams, like Billy, some are focused on becoming very successful, like Jimmy Ray and the mayor. Members of the cast have found many things in the show that are interesting that many of the members of the cast have never thought of before.”

One very unique element of “Bright Star” is the involvement of the ensemble in almost every scene.
Though many principal characters did not get this opportunity, ensemble members were found sitting on the stage, observing the action and following the plot based on storylines developed by each student.

“The more people on stage, the more real it feels, and it improves each scene considerably,” said junior Bruce Peters, who portrayed Mayor Dobbs. “The high-energy scenes are so much fun to watch when you have other characters there to set the scene. At the same time, the uplifting scenes are just that much more beautiful when you see the look of inspiration and awe in the faces of the ensemble.”

The feeling created by the presence of the ensemble combined with the dedication of all students involved led to a Best Production nomination from the IHSMTA for the fourth consecutive year after two consecutive wins.

Not only was the entire production nominated, but seniors Mike Bindeman, Erin Lee and Bridey Costello were nominated individually for the Best Actor and Best Actress awards. Lee, who portrayed the role of Alice Murphy, found this role to be the most difficult she has ever performed, but it produced such joyful results.

“The whole rehearsal process is a joy, but if I had to pick one thing, it would be the journey of bringing your character to life off of the script and creating a personality for him or her in the world he or she lives in,” Lee said. “For the first weeks of rehearsal a lot of discovery takes place, but by the end of the process, you’ve created a personality and can portray it with confidence.”

But before an audience and award nominations, cast and crew members took pride in the hard work for this production and the depth of each personal backstory, proving to be one of the most dedicated group of performers in York Drama thus far. A lot of the students’ dedication and hardwork was found through a visit by original Broadway cast member, Jeff Blumenkrantz, who watched some parts of the production and provided feedback.

“To be able to build our show around a member of the original cast is incredibly special,” Peters said. “I will never forget watching the final product of the show and getting goosebumps all throughout the show, and feeling a sense of pride for all of those involved. We worked so hard to make this show as beautiful as we possibly could, and I can wholeheartedly say that we did.”

With the help of crew members, directors, stage managers and alumni, students were able to create a seamless show, even though the story is full of transitions between two different time periods.
Not only does the set transition, there are so many emotional shifts throughout the story as well with deeply rooted emotional complexities for principal characters and ensemble members alike.

“It is such a wonderful musical because it flows from scene to scene, sometimes from a devastating one right to a fun dance number,” Kungl said. “Each scene in the show is so important and interesting that the audience is never pulled away from the story,”

In a show filled with so many contrasting emotions and differing messages, director Rebecca Marianetti just wants audience members to find the hope that each character finds throughout their individual journeys, no matter how dificult the path becomes.

“Bright Star is a story of sadness, longing, loneliness and tragedy, but it is also one of love, truth, and most of all hope,” Marianetti said. “Hopeful that visions we all have for our lives will evolve, grow and triumph. Hopeful that with all of the strife in this world, we will find some measure of peace.”