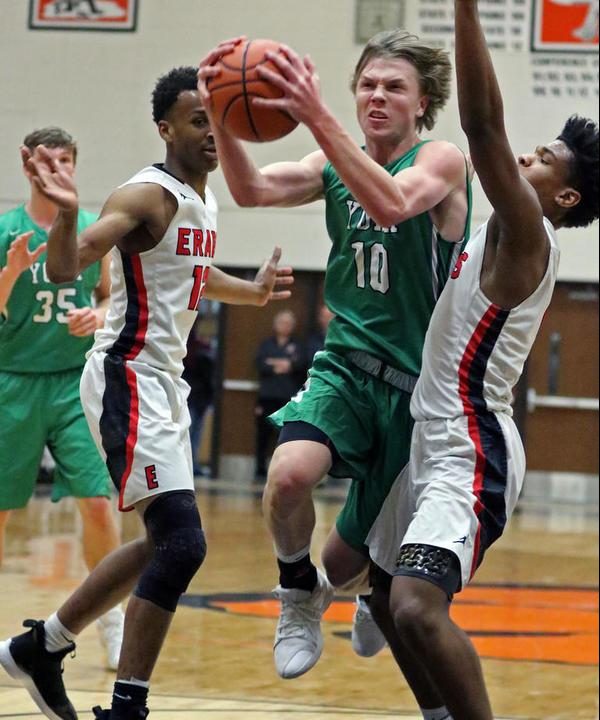 Photo courtesy of My Suburban Life

After a successful season featuring an overall record of 27-4, a .848 win percentage, and a 10-2 West Suburban Conference (WSC) record, the Dukes were able to work their way into the playoffs. However, they came up short in the Sectional round of the tournament.

In the first round, the rested Dukes studied their game plan against Prosser as they received a first-round bye. In the second round, they played Prosser and got an easy win with a score of 66-38.

In the Regional Championship, York had to go against fierce rival Oak Park-River Forest (OPRF). York was 0-2 against the Huskies this season, but as soon as the playoffs came, the Dukes prepared for the challenge. Wanting revenge, the Dukes pulled off the win with a score of 74-56, earning a sweet victory at last. All of the teams members felt the significance of this game.

“The highlight of our season was probably winning the Regional Championship at home against OPRF,” senior Nick Kosich said. “They had beat us twice this year already, and we couldn’t let them beat us for the third time; it’s something I’ll never forget.”

A week later, the Dukes headed to Proviso West to play the 2017 state champions, Whitney Young. Whitney Young is seen as one of the most elite high school basketball franchises for the past 10 years, having won four state titles (1998, 2009, 2014 and 2017). As the teams made their way into Proviso West for the Regional Finals, the sea of Duke fans was overwhelming. There was not an open seat in the gym. With the electric atmosphere, the Dukes battled throughout all four quarters to come up short against the Dolphins, ending their run in the playoffs.

Although the team was heartbroken, there were still many accomplishments by the Dukes this season. This was their best record since the 2005-2006 season when they went 23-6, two players reached the benchmark of a career 1,000 points this season, won the Jack Tosh tournament and made it all the way to the Regional Finals.

Scoring 1,000 points in a four-year span is not easy by any means, as it takes an extreme amount of work and craft to be able to go out every night and shoot lights out, especially, if you’re competing against your brother’s accolades. Senior Erik Cohn was able to reach 1,000 points and felt accomplished and proud he was able to finally share this honor with his brother.

“I felt pretty accomplished to score 1,000 points cause my brother is the second highest scorer in York history,” Cohn said. “It’s tough to have to fill such big shoes, so it felt pretty good getting my name in the record books.”

Likewise, senior Nick Kosich felt honored to be a part of such a prestigious group of the York Alumni, yet he was never focused on trying to score as many points as possible. Rather he focused on the real goal, winning games as a team.

The varsity team for the last three years has solely consisted of this year’s senior class. In all three seasons, Coach Vince Doran not only coach these kids as players but to expand and have a unique relationship with each and every player. When asked who future York basketball players should look up to, Doran gave nothing but endless love for the senior class.

“The senior class is going to be missed because all of them are great leaders on and off the floor,” Doran said. “I would tell all of our younger players to look up to any of our seniors they are all great role models. Nick Kosich will always stand out to me for his ability to overcome anything that came his way. I will always remember him and all of our seniors for the unselfish attitude they always displayed this past season. Anyone that had a chance to watch them play knows what I’m talking about.”