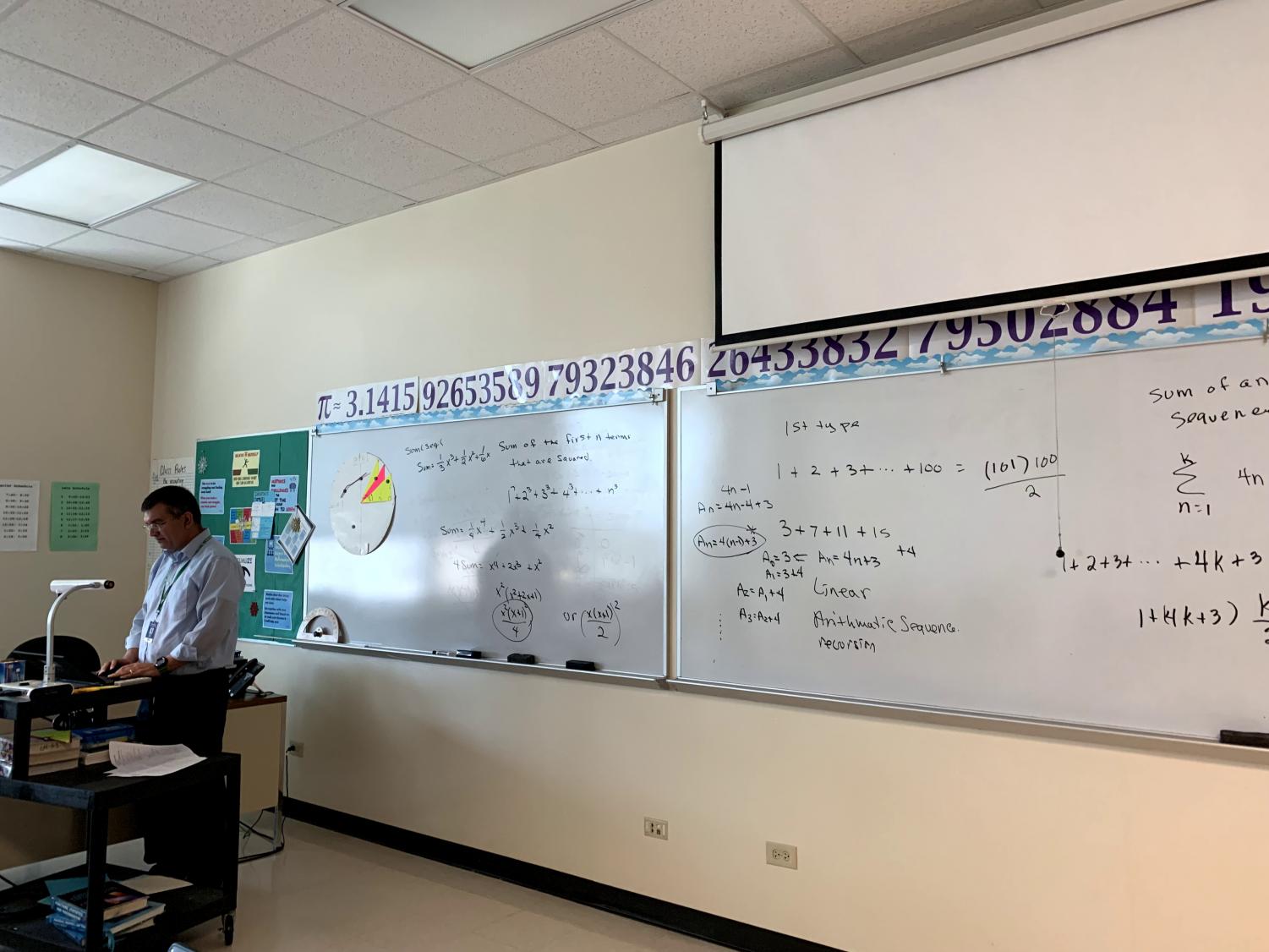 Mr. Zamora reviews the day's lesson with the aid of his whiteboard. (Photo by Rachel Perry.)

Mr. Zamora reviews the day's lesson with the aid of his whiteboard.

Although math can oftentimes be a difficult subject for students, a new teacher and department chair is teaching a generation of students different approaches to math and learning as a whole: Ismael Zamora.

Mr. Zamora recently came to work at York at the start of the 2018-2019 school year to replace Sue Brown, the previous math department chair. However, his love of math started well before he came to York.

“[Math] was the only thing I was ever good at as a kid,”  Mr. Zamora,, said. “[My Dad] would always give [my siblings and me] math problems, and he expected us to do well in math. I always wanted to do more. I took every math course I possibly could.”

Starting in 1997, Mr. Zamora began teaching math at a variety of middle and high schools including Hinsdale South and Lyons Township, yet it was only recently that he started to pioneer an innovative way of teaching and grading.

“What I’ve been finding is that the thing that holds students from [learning] is the chase for the grade,” Zamora said. “We’re constantly looking for a grade. So this is the first time I’ve ever thought, ‘Let’s just remove all that pressure all together, and let’s not worry about the grade.’ Let’s worry about the learning, worry about what it is you’re trying to get at, and trying to get better at.”

Instead of traditional grading, Mr. Zamora calls his style of grading “extreme standards-based grading” where he attempts to remove the labels of numbers and grades and replace it with feedback on skills.

“The minute you put a point on there, you focus more on how much it’s worth and not on the feedback that this instrument is giving you,” Zamora said. “This is the first time I’ve ever done it where I’ve done no kind of points, so all I do is give feedback, telling you as a student what is it that you still need help with or still need to work on. It’s standards based grading taken to another extreme.”

Essentially, tests in Zamora’s singular precalculus honors class are graded by objectives set for each unit, with a student receiving a 1 through 4 on each objective depending on their level of understanding. This system replaces the traditional way of grading math tests where tests are cumulatively graded with points rather than broken down into objectives and then measured by a 1, 2, 3, or 4.

Although some classes with standards-based grading can cause complaint amongst students, those enrolled in Zamora’s precalculus honors class prefer his system of grading and teaching.

“He’s not too pushy like the other teachers,” said junior Merlin Thomas, a student in Mr. Zamora’s precalculus honors class. “He actually listens to the students and says ‘Hey are you guys ready to take the test?’ and, if we say ‘no’ he says ‘Okay let’s work on it,’ which is what teachers are supposed to do.”

Mr. Zamora’s interactive and skill-based learning finds popularity amongst students because of its focus on approaching education at the core of its roots: getting students to learn.

“It’s not just a flip of a switch. It’s a change of the way you see the purpose of education and how you approach education,” Zamora said. “I just want students to learn, period.”

Zamora’s student-focused growth is something students themselves find more personalized and favorable.

“He cares about us a lot, and he doesn’t really just teach us what he’s supposed to; he teaches us what he knows that we need to know,” said sophomore Zoe Burkhardt, a student of Zamora’s. “He’s not super strict about the rules and tests. He lets us learn in our own ways.”

Ultimately, Mr. Zamora reflects a shift in the district of moving towards a more student-based education.

“The district, in general, wants more students to challenge themselves at the abilities that they can handle,” Zamora said. “What we’re starting to find out in education in general is you can do a whole lot more with a whole lot less.”

In following a “less is more” trend, the math department has eliminated courses for the upcoming school year. This includes Algebra A, exclusively freshmen and sophomore versions of geometry, and Enriched Advanced Algebra Trigonometry Honors. In addition, classes confined to specific grades will now include students of multiple grades.

Grading aside, Mr. Zamora hopes for students to remain intrigued by the world around them and for teachers to foster this love for learning.

“Teachers are facilitators of learning and not teachers of information,” Zamora said. “We’re here to get students to learn and be curious about the world, so they can find the information out on their own. If you’re curious about something, there’s nothing that’s gonna [sic] stop you from learning about it.”