The best movie of all time is “Good Will Hunting”, how do you like dem apples? 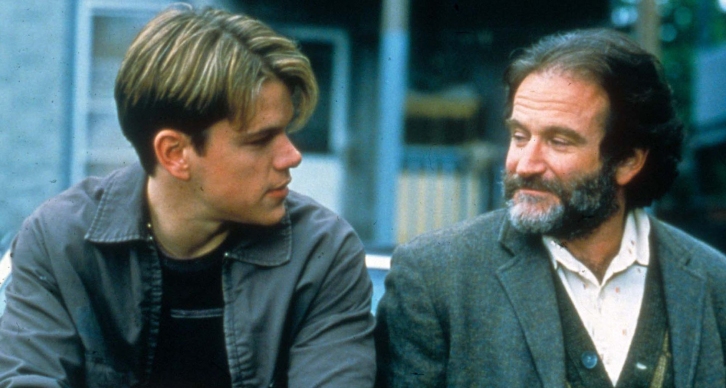 Matt Damon and Robin Williams on the set of "Good Will Hunting."

Across everyday conversations, minor discussions in passing, and in almost every ice breaker known to man, the question arises “what is your favorite movie,”.

Now, I am here to answer not just what my favorite movie is, but what movie earns the title of the best movie of all time. Brace for it: “Good Will Hunting.”

Some may utter in disbelief at my claims, citing “Forrest Gump”, “The Godfather”, or any of the “Star Wars” movies as films that take the cake, but hear me out. None of these films have the sheer talent of young Matt Damon and a mature Robin Williams where both their characters form one of the best cinematic friendships on screen. Keep reading for further elaboration.

But beware, if you do keep reading, spoilers are ahead. If you haven’t watched “Good Will Hunting”, do yourself a favor, hop onto your Netflix account, and lay your eyes on two hours and six minutes of pure greatness. If you disregard my advice and keep reading, you may ruin the best movie of all time for yourself, and I will not be held responsible.

Our film begins in Boston during the 90’s, centering around a genius named Will Hunting, played by Matt Damon, who’s caught between worlds.

Will Hunting has the talent to become a renowned mathematician, yet lives in poverty in Southern Boston and was formerly an abused foster child.

While watching, it’s easy to say early on in the movie that Will doesn’t recognize his own potential, making this movie tragic from the start but encourages the viewer to remain entranced. It’s as though you’re watching a highly advertised sports match between the locally hated team and the underdogs; you root for the underdog the whole movie.

Yet a complex math problem sets off a chain of events in Will’s life that change it forever.

When math professor, Gerald Lambeau at MIT scratches an extremely difficult math problem on a blackboard in the hall, one that took himself two years to prove, Will solves the problem with ease.

However, when Will beats up a childhood bully and faces prison, Professor Lambeau strikes a deal with the judge to get Will into therapy instead of prison while also studying math at his side.

Will weeds through many therapists as he claims he doesn’t need therapy until he meets the ultimate mentor played by Robin Williams.

Robin Williams plays Sean Maguire and not only transforms Will as they form an incredible relationship, but the movie itself.

As Will goes to his own therapy with Sean, Sean in turn receives therapy from Will as they both mend each other’s broken parts. Sean deals with his own haunting past as he copes with the death of his wife while Will is on the verge of destroying his own future by backing down on his own intelligence and emotions.

With a Rotten Tomatoes score of 97%, while also winning two oscars for best screenplay and best supporting actor won by Robin Williams, even movie critics agree “Good Will Hunting” is a masterpiece.

The raw performance given by Williams as Maguire is second to none. It’s truly captivating to watch as the film progresses to reveal more of the tragic tale experienced by both Hunting and Maguire.

Even with undertones of tragedy, the film still makes for humorous one. Will constantly cracks jokes and comes up with the best witty responses. My favorite being when he roasts a pretentious graduate student in a bar and goes onto rub it in by asking him, “How do you like dem apples.”

Moreso, throughout the film, Will overcomes his vulnerability when it comes to his emotions in his relationship with Harvard student, Skylar. Despite his reservations at first, their relationship matures and Will ends up following her to medical school in California. He leaves a note to Maguire saying, “I had to go see about a girl.”

This movie will always hold a special place in my heart as it depicts such a unique yet honest story line that is relatable to anyone. Fittingly, I have no regrets in saying “Good Will Hunting” is the best movie of all time.