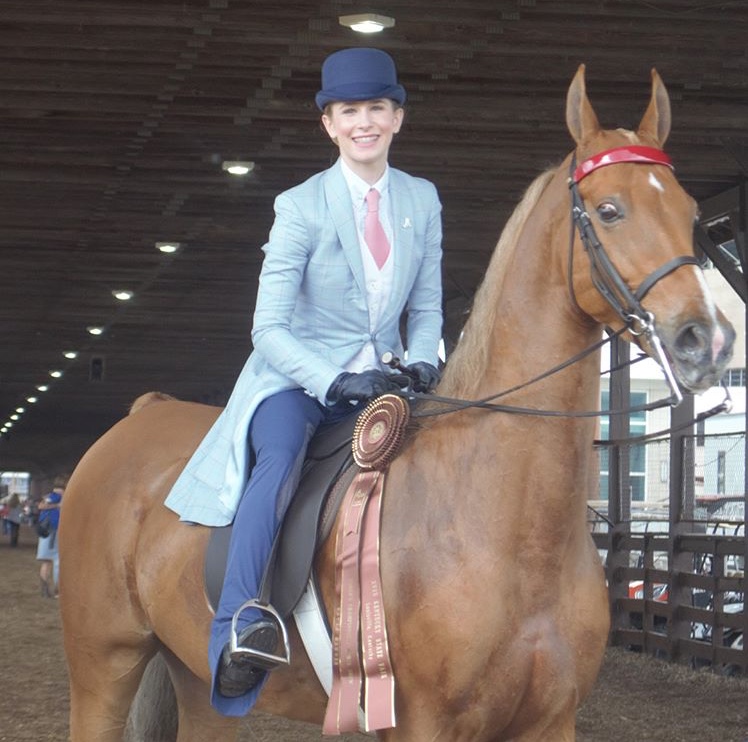 Mia and Ernie posing for a photo after winning a ribbon at her competition. (Photo courtesy of Mia Provenzano )

Mia and Ernie posing for a photo after winning a ribbon at her competition.

It’s pretty standard for an athlete to use equipment such as racquets, balls, or a bat in their sport, but what’s not too heard of is using a horse as your only instrument for competition. Mia Provenzano, sophomore, has grown up in a sport that gives its athletes the privilege of working with animals and grow their confidence through competition. With her tenth year of riding in full operation, Mia has proven her strengths in both her competitions, as she has ranked in competitions as high as Worlds, and bonds with each of her horses, Ernie and Thunder.

While Mia’s success may look easy from an outsider’s perspective, countless hours and grueling practices are put into making such a successful season.

“When I first started riding nine years ago I rode once a week, however, once I started competitions that number rose to three times a week,” Provenzano said. “Now that I have two horses and am actively competing and preparing for the World Championship Horse Show, I ride six times a week with three different instructors on different horses.”

Even with all of the strenuous hours spent at the stables in private lessons and on horseback, being apart of such a competitive sport requires an extra degree of focus and attention to detail to be set apart from any other athlete in the competition.

“It’s less about how Mia looks and more about the partnership she has with the horse to get this 1200 pound animal to do what she wants,” Mindy Provenzano, Mia’s mother, said. “That takes a special skill, never-ending patience, a great trainer and lots of videos (which is my job).  She will watch video after video critiquing herself so she can get it right.”

Although Mia dedicates numerous hours of work in and out of the stables trying to nail each jump, approach, etc., competing at such a high level in a sport oftentimes comes with unfortunate sacrifices.

“[Mia] tries to join clubs through school and just this year she participated in FCCLA where she received second place and a chance to compete at nationals in ‘cookie decorating,’” Mindy Provenzano said. “It just so happened that nationals were held in Springfield the same weekend as her first horse show [of the] season, which was in Cedar Rapids, IA, so she couldn’t participate in FCCLA at state.”

But with all of her success and accomplishments achieved, Mia has proven all of the hard work and sacrifices to be worth it in the end.

“Last year, Mia won numerous champion and reserve champion titles throughout [the] local and regional circuit,” Emily Doll-Darnell, one of Mia’s three instructors, said. “She also competed at the World Championship Horse Show in Louisville, KY and the National Championship Horse Show in Kansas City, MO where she earned top ribbons in both shows. She finished out last season winning almost every year-end high point award for her division.”

While hard work, time, and effort carry the heavy load of Mia’s success, excelling this far in the sport requires something that mimics a similar meaning of a team in other sports, but to a different severity.

“I believe that [bonding with my horse] not only makes our experiences better, it also helps our performance during competition because I’m more in tune to my horse’s movement, [can] understand their personality, and can predict what they may do at a specific point in [the] ride,” Provenzano said. “When I got Ernie I would brush him several times each week, I still do, and it has definitely impacted my knowledge of his personality as a horse and a teammate.”

With such a time and work intense sport, it’s important for athletes such as Mia to have a strong support system to lean on throughout each tough season.

“Having a support team is really important because they are always there to cheer for you on the rail,” Provenzano said. “Most of the time when I am competing I tune into my instructor’s voice but I always know when my friends are screaming from across the arena for me, it’s a great feeling to know [that] you’ve got people cheering you on.”

As Mia pockets her previous victories and accomplishments, she looks forward to her busy and hectic schedule for her upcoming competitions with her prized friends, Ernie and Thunder.

“My future plans include my third trip to the World Championships with both of my horses Ernie and Thunder,” Provenzano said. “They both compete in different divisions, Hunter Country Pleasure and a Five-gaited respectively. I hope to ride throughout the rest of high school, college and whatever career I choose after.”

Gallery|3 Photos
Photo courtesy of Mia Provenzano
Mia and Ernie posing for a photo after winning a ribbon at her competition.