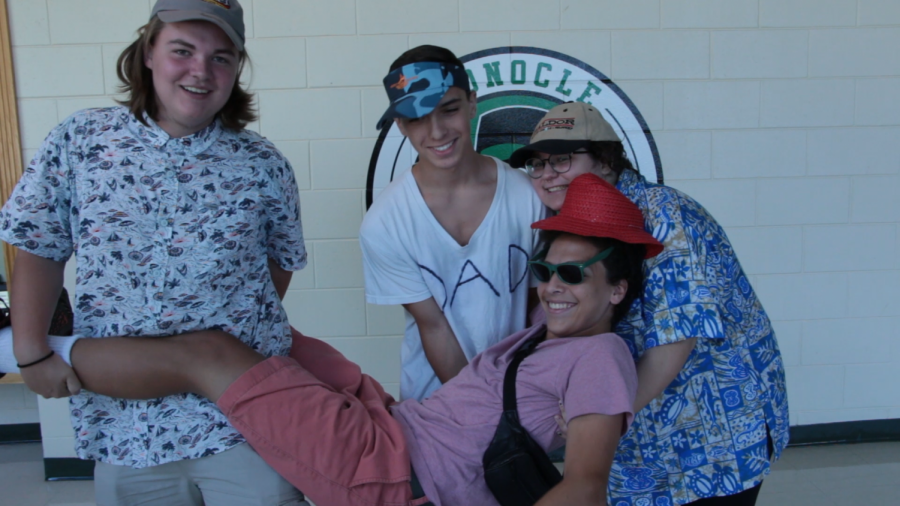 Imagine the stereotypical Dad. Perhaps images of khaki shorts and Hawaiian shirts pop into your head; possibly corny jokes and lame stories that drone on forever come to mind. For the 2019 season of King of the Couch, the Dad Dukes strive to embody the spirit of the typical Dad.

The group is made up of seniors Angelica DeBenedictis, Gabriel Jentel, Jorge Shaw, and Dominic Milazzo who can be seen sporting visors and fanny packs as they visit sports practices and clubs.

The idea for their group theme came naturally.

“Basically we made a group chat because we’re all were friends from sketch comedy club, and I said ‘Hey wouldn’t it be funny if we all were dads,’ and they all said ‘yep,’” Debenedictis said.

In a similar sense, the ideas for their costumes were not a complicated affair.

“We bought our costumes at Goodwill and the dollar store,” Debenedictis said.

With Hawaiian shirts and crocs, Dukes can tell the Dad Dukes are in fact, reflecting the Dad population.

“I like their crocs, and I think the Hawaiian shirts really represent what a Dad would wear,” junior Megan Juneman said.

Just as their costumes portray the typical Dad, the Dad Dukes’ social media additionally depicts the behavior and spirit of a stereotypical father figure.

“I like their social media,” sophomore Abby Conners said. “I think it’s really funny, and it definitely represents dads.”

In the spirit of the King of the Couch competition, the Dad Dukes are thrilled to hopefully claim their spot on the couch at the Homecoming football game.

“We’re looking forward most to sitting on the couch,” Shaw said. “Honestly I’m excited to sit on that couch.”

As the Dad Dukes visited clubs, the goodies given to them from their visit to Garden Club stuck out.

“We went to Garden Club, and it was very memorable because they gave us food,” Debenedictis said.

Aside from clubs, a visit the boys cross country practice ended up as a highlight for the group.

“The event that surprised us the most was cross country practices because they lowkey slap,” Jentel said. “The reason why they lowkey slap is because it’s really cool. You get to hang out with a bunch of cool people. It’s kind of awkward because they’re all shirtless, but it is what it is.”

Yet, just the feeling of competing as a King of the Couch group has a profound effect on the Dad Dukes as much as their visits to clubs and sports.

“When we walk through the halls, it feels powerful,” Shaw said. “We have York in our hearts.”

Due to their unforgettable experiences so far, the Dad Dukes recommend others to form a couch group their senior year.

“People should make King of the Couch groups because there’s no reason not to,” Milazzo said. “You’re seniors and you just get to have fun, and everyone else is having fun doing it. It’s not really a competition that much. Why not do it.”