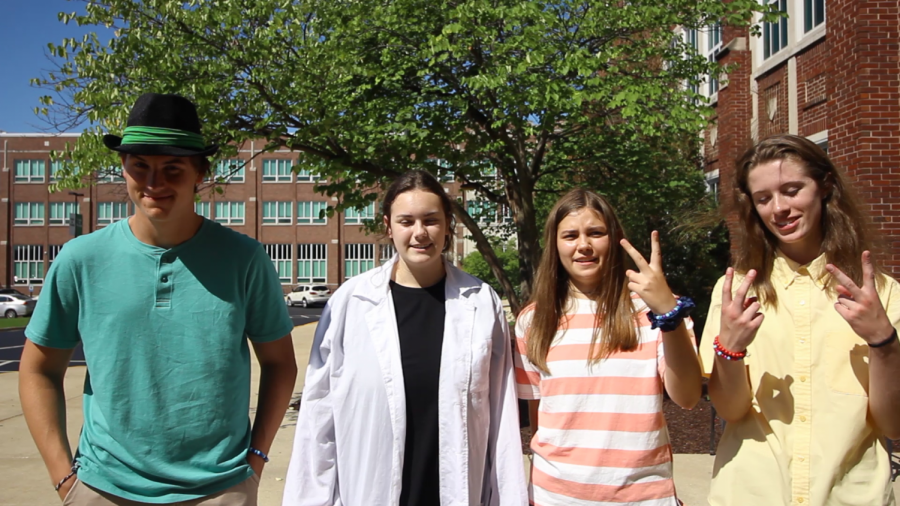 Members (from left to right) Bruce Peters, Johanna Kramer, Laurel Baumann, and Maggie Moriarty of Dukensmirtz Evil Inc. hope to trap victory and hold it for their own in the King of Couch competition.

If you’ve been walking around the hallways this year, and someone’s outfit reminded you of a kids television show, you might have seen seniors Bruce Peters, Laurel Baumann, Johanna Kramer, and Maggie Moriarty walking down the hallways. While school may have come around just to end summer vacation, the group has found a good way to spend homecoming season– spreading school spirit and demonstrating duke pride.

“We got our idea from the kids show Phineas and Ferb,” Kramer said. “We decided that the main characters were cool enough to embody and have a lot of fun with them.”

Their enthusiasm about their costumes and theme is appreciated by the student body.

“I feel like some of [the king of the couch groups] aren’t as original as they could be. But, Dukensmirtz put their own little twist on it,” freshman Cyra Fowich said.

The group has a lot of fun and enjoys Fridays when all the groups dress up and play music in the hallways.

“It’s cool because everybody walks to the beat of you music,” Kramer said. “It’s really cool because people see you having a good time in the hall and raising school spirit that you wouldn’t have otherwise.”

Their music and theme also helps to pump everyone up for school events.

And while Fridays are great, the group is looking forward to performing an original dance during the halftime show at the Powderpuff game.

“We’re looking forward to the Powderpuff game and doing our dance there,” Kramer said.

With all of the dancing, music, and school spirit, the group highly recommends underclassmen form king of the couch groups during their senior year.

“As a freshman, the [couch groups] were very memorable,” Peters said. “It’s one of the most iconic parts of the beginning of the year, and when you’re on the other side bringing school spirit, it’s unique and it’s fun.”