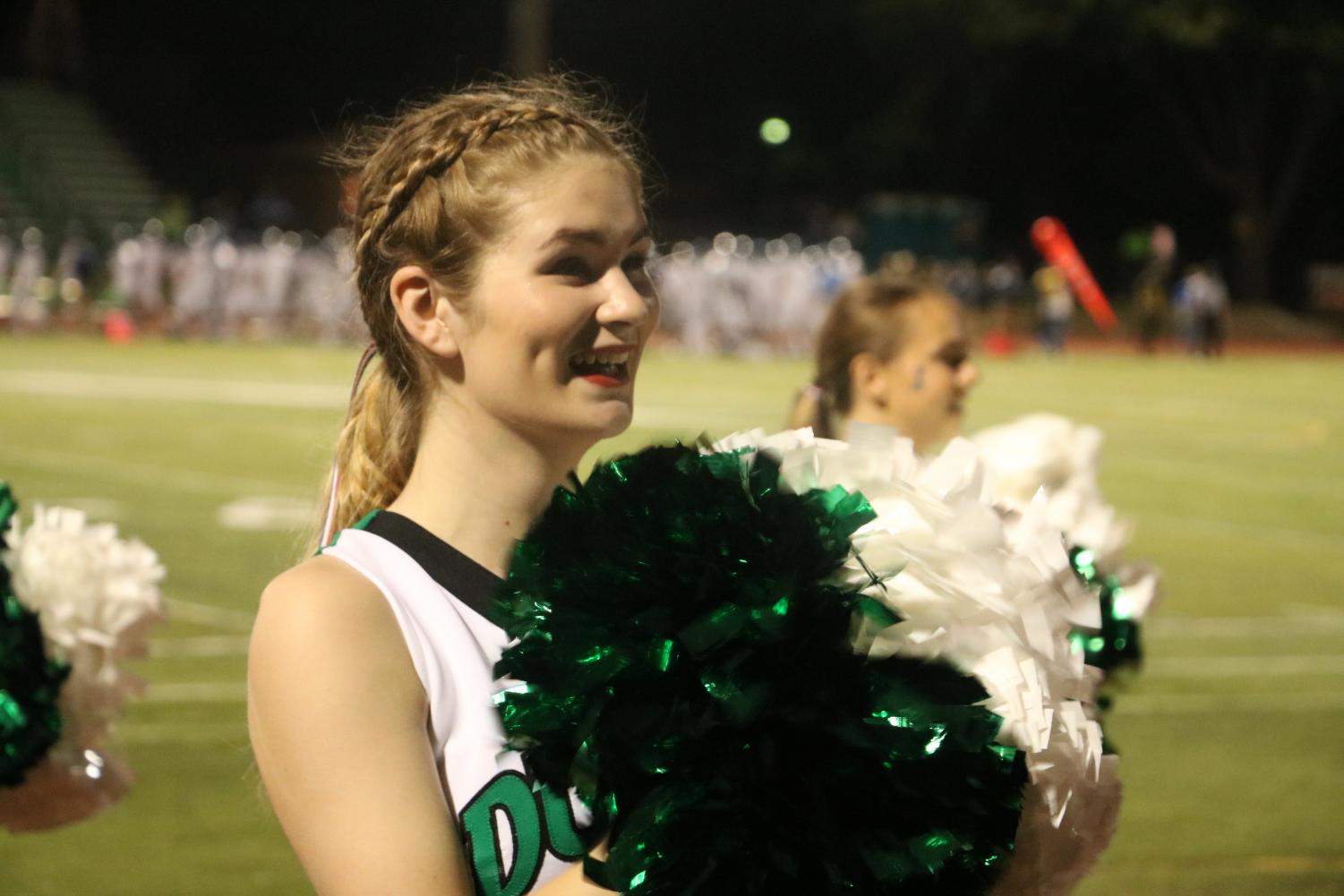 Junior Lillian Marrah helps lead the crowd in a chant during the second quarter of Friday’s game. (Photo by CeCe Lampa)

Junior Lillian Marrah helps lead the crowd in a chant during the second quarter of Friday’s game.

Football games aren’t just about the team playing on the turf, in reality it takes more than one team to create the atmosphere at Friday night football games. The dance team, cheer team, marching band and the football team all pour their effort and talent into Friday night lights.

“There’s an adrenaline rush because there’s so many people so excited for the same thing,” Varsity Cheer junior captain Grace Maniola said.

It’s this common goal for the Friday night lights tradition and competitive success that drives musicians and athletes to sacrifice as much as they do.

“It’s pretty crazy when you think about [the number of hours we put in],” Varsity Football Coach Mike Fitzgerald said. “It’s like anything where we tell the kids if you want to be great at something you can’t take shortcuts, you have to commit to it.”

The hours? “Countless” according to Varsity Football captain Josh Mathiasen. It’s the common thread throughout these four teams, a whole lot of hard work.

“We work really hard [on] our dances, and there’s a lot of time put into them,”  Dance Team co-captain Emily Hiser said.

These teams also all have goals behind the games we sit in the stands for. Maniola is striving to lead her cheer squad “to state and hopefully make top ten”. There is immense focus to achieve these individual team goals.

“Success for our team is definitely improvement,” Dance Team co-captain Eloise Odorisio said.  “Anything we can do to work hard this year we are doing.”

It’s not always the competitive goals that will lead to a winning season. While these dreams of trophies or plaques might be the forefront of team’s minds, it’s the underlying team that achieves this.

“Obviously everyone wants to say play offs,” Mathiasen said.  “But my goal for the season is: making sure the whole team has no regrets, we put our all on Friday nights to make sure that, win or lose, we are satisfied with how we played and make sure that at the end of the day, we know we are all brothers.”

In the end, each of these groups bring their own unique purpose to the field.

“I guess it’s safe to say that the marching band is responsible for bringing a lot of school spirit and fun energy,” Marching Band drum major Maggie Wisniewski said. “For me, going to the football games on Friday night, that’s my favorite part and just being able to give that [energy] to the student section, to the audience and share that with the crowd.”

The constant pressure to perform is offset by the camaraderie of teams. It’s the dance team’s ritual Zumba workout before competitions and games or the football team jogging with Mathiasen over “to the home field to stand at the ‘Y’, and just talk [to] make sure our minds [are] right before our first game”. It’s the cheerleaders getting ready in a flurry of makeup and tricks together before the game. It’s in the stands when a collective cheer rises as a football descends through a goal post.