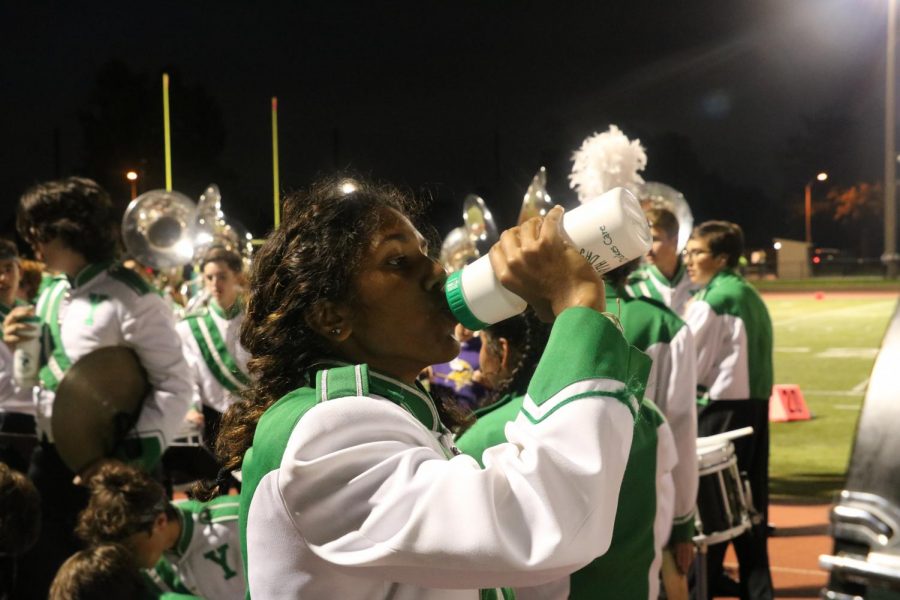 During a break between songs, junior Anjaly Kappen drinks out of one of the reusable water bottles provided for the entire marching band.

With the impending urgency of climate change and scientific discoveries about the limited time humans have to change their behavior, York is experiencing an even stronger push to go green and combat the “soon irreversible” damage.

In the past several years, our reporters have covered stories on the ongoing eco-friendly projects and events led by chemistry teacher Bob Blaus and Eco Club.

Social studies teacher and girls varsity volleyball coach Patty Iverson understands that now is the time to maximize change in the community, and this year, she brings a new level of energy and effort to make York even more green.

Iverson grew curious about the environment after reading articles regarding microplastics in our day to day lives and implemented new strategies in her own life. From there, her push to strengthen environmental conservation has only increased.

Her next step to raise awareness included the girls varsity volleyball team. Through t-shirt sales and concession sales at matches, the team donated to CarbonFund.org, a non for profit organization fighting climate change. The change truly resonated with team captain and junior Gigi Barr who has adopted the “green lifestyle.”

“Mrs. Iverson has been a huge motivator and leader in our plastic crusade and our fight to help the climate crisis,” Barr said. “She encourages all players to bring reusable water bottles, use compostable ziploc bags, and do all the little things that really do make a difference.”

From hallway decorations to plastic water bottles at the highly attended Friday night football game, Homecoming week produces more waste than most. If each student could start with one change during Homecoming week, a significant difference would be made to York’s overall waste.

“This summer, we bought water bottles for all of the band members so that even goes through to other departments,” Iverson said. “In the fall, our team bought stainless steel ones, so we are really hoping to set an example for other people.”

After the excitement of the game, students get ready for Saturday night’s Homecoming dance. A struggle for many students is finding the perfect dress to wear; however, this presents problems for the environment, mostly in the form of microplastics, small pieces of plastic debris created by the breakdown of waste.

In order to limit the amount of dresses purchased each year, Fashion Club organized a homecoming dress drive to sell and loan dresses for students who want to help reduce their carbon footprint.

Similar to the Book Drive done by Eco Club in the past, it featured used items with the hope of finding another purpose.

“I know most people buy their homecoming dresses and wear them for one night,” Fashion Club board member and sophomore Piper Michalski said. “So many nice, and barely used, dresses will never be worn again, and it’s really beneficial to find ways to make them work again by finding a way to repurpose them.”

Students will gather in the gym for Friday’s pep rally to support our football team as they prepare for the big game, but another “green rally” will take place the night before for the Global Climate Strike. With a board formed by and made up of a group of students, this strike will advocate in a variety of ways students can reduce their carbon footprint. Any student can attend this event to learn about ways to steer clear of the irreversible damage our generation could face.

The rally will feature guest speakers, including Iverson, who became a leader of the rally. Speeches will also be given by board members of the Elmhurst strike and other guests. One board member who has spearheaded the planning of the event is senior Nick Mastro. Mastro has grown passionate about this topic and hopes to make a change in any way possible.

“In terms of bigger picture things, it makes a big difference to pay attention to which environmental issues are occurring right now– and to contact elected officials and leaders to encourage them to act,” Mastro said. “Attending events like ours to spread awareness can make a big impact. Everyone must do their small part in solving environmental issues- but nothing will change until a larger number of people realize the issue at stake.”

York will increase its fight against climate change and reduce the damage done in our community. Now, it is about getting all students to join the change. The environment is our future and our lives, so we must be the generation to make a difference.

Iverson always refers to a teen advocate for climate conservation, Greta Thunberg. Her words state best the significance of our actions. 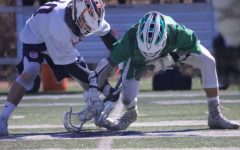 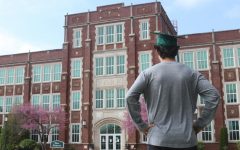 Class of 2020 faces an unprecedented ending 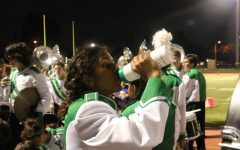 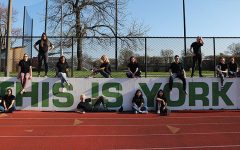 Continuing the conversation: how do we talk about mental health?