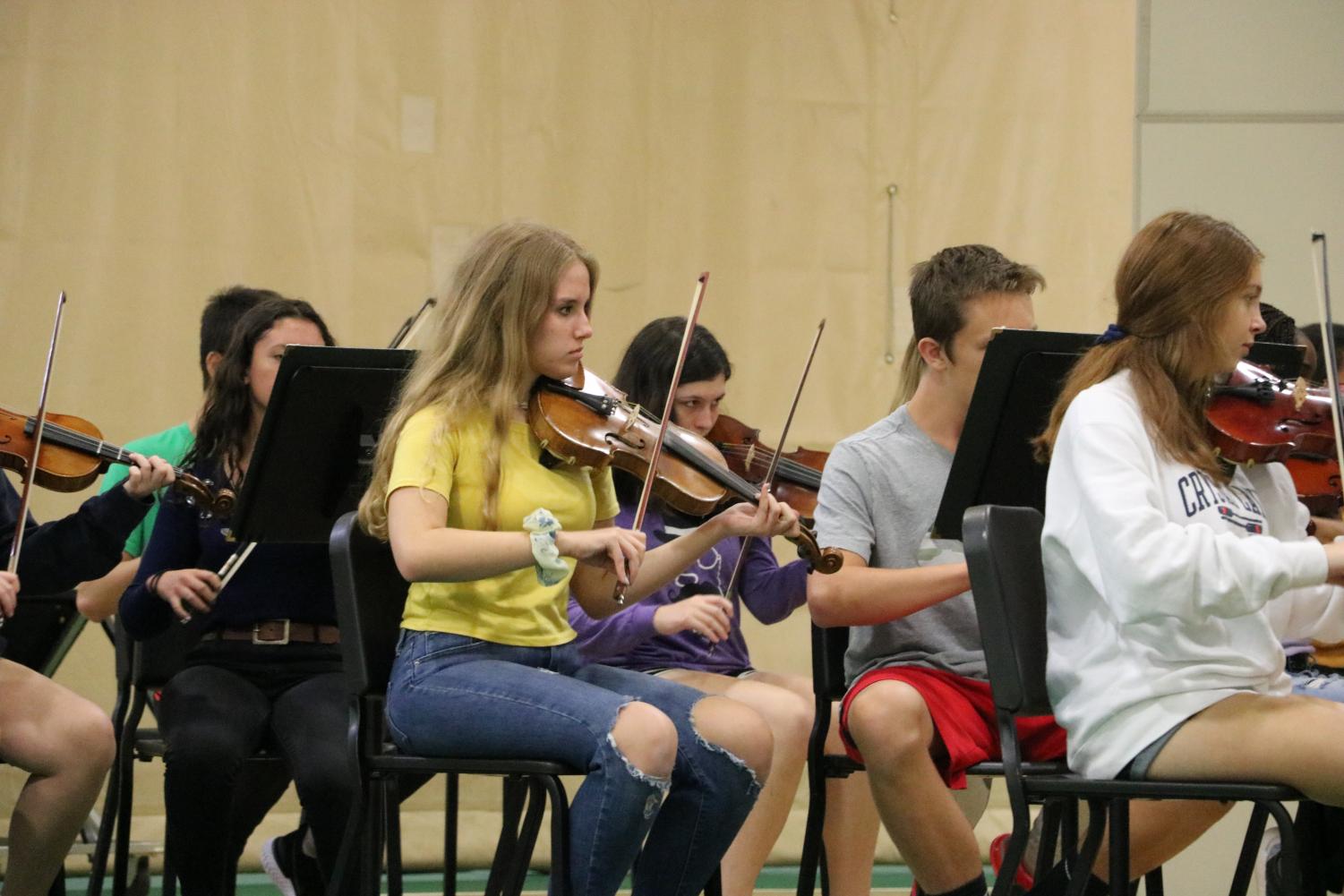 This past Wednesday evening, the York Performing Arts classes and extra-curricular groups gathered in the Joe Newton Field House to perform the annual Collage Concert. The concert showcased the talent of the band, orchestra and choral classes as well as the jazz ensemble, the marching band and Advanced Dance.

“The Collage Concert is unique in that every band, choir and orchestra and advanced dance all perform in the same concert,” choral director Rebecca Mariannetti said. “450 students, all celebrating the arts together. It is truly an incredible night and the talent of the students is amazing.”

The Collage Concert gave students the opportunity to witness other musical groups that they do not generally see throughout the school year. The evening kicked off with a performance by Advanced Dance.

“Including the Advanced Dance as part of the [Collage Concert] program gives the audience an opportunity to translate sound into movement through full-body expression,” Advanced Dance teacher Michelle Jensen said. “Dance provides layers of texture, dynamic and storytelling to an already beautiful piece of music.”

Instead of dancing to a recording, senior Sean Solem provided the vocals for a live musical performance of “Have You Ever Seen The Rain?”.

Following Advanced Dance, the cadet ensembles performed. Cadet Orchestra played “Dramatic Essay” by Mark Williams while Cadet Band performed “Blue Ridge Reel” by Brian Balmages. Cadet Choir sang the conveniently titled “Duke’s Place” by Ellington. For many of the Cadet members, it was their first time being in a York concert.

“I thought the Cadet ensembles fit right into the concert. They were so talented and really did a fantastic job in the pieces that they were given,” junior and Concert Choir member Allie Sidio reflected. “It’s crazy to see how far I have come since freshman year Cadet Choir.”

The Jazz Ensemble, directed by Michael Pavlik, played “Fowl Play” by Kris Berg next. Jazz ensemble differentiates itself from the other musical ensembles by featuring soloist’s improvisation. The soloists in the Collage Concert were seniors Mason Lampa, Henrik Rivadeneira, and Sara Siliquini.

Next, Choraliers, the all-female choir, sang “Bring Me Little Water, Silvery” acapella with some of their own body percussion.

“Choraliers is a really great group to be apart of because it is the only choir of all girls,” sophomore and Choraliers student Rosie Kungl said. “In our song, we used body percussion. It was a challenge for all of us, but in the end, it was so much fun and I think the audience really enjoyed the body percussion because it is not something they normally see.”

Pavlik conducted Symphonic Band’s piece, “Fanfare for Justice” by Richard L Saucedo. The band had an exciting and impassioned performance despite the limited time they had to prepare.

“Symphonic band has been working really hard despite only having three rehearsals,” Cooke said.

The final choral performance of the night was “Elijah Rock” by Moses Hogan. The Concert Choir also sang their piece without accompaniment and was directed by Mariannetti.

“Elijah Rock is so much fun to sing and it’s exciting to see how well Concert choir is doing this year,” junior Emma Taylor said. “It’s so exciting to finally be in and perform with Concert choir.”

“Our piece was really fun and I think the Collage Concert piece is always my favorite piece to play during the year,” Fellow Symphony Orchestra member Zoe Daniel said.

The evening concert concluded with a performance from the Marching Band. Led by drum majors Sam Jensen, Avie Magner, Andrew Trenta and Maggie Wisniewski, the band played “Think” by Ted White and Aretha Franklin. Their performance finished with the York fight song and the audience on their feet. The Marching band filled the audience with York Duke’s spirit as they exited the concert.

“We’ve made a lot of progress from the beginning of the year until now,” Olson said. “It’s cool to show our family and the rest of the music department that progress.” 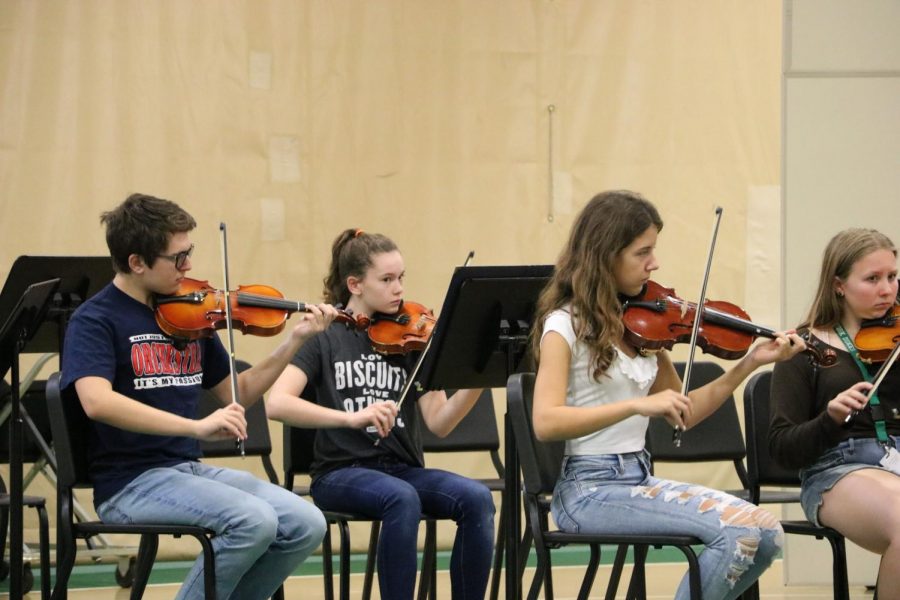