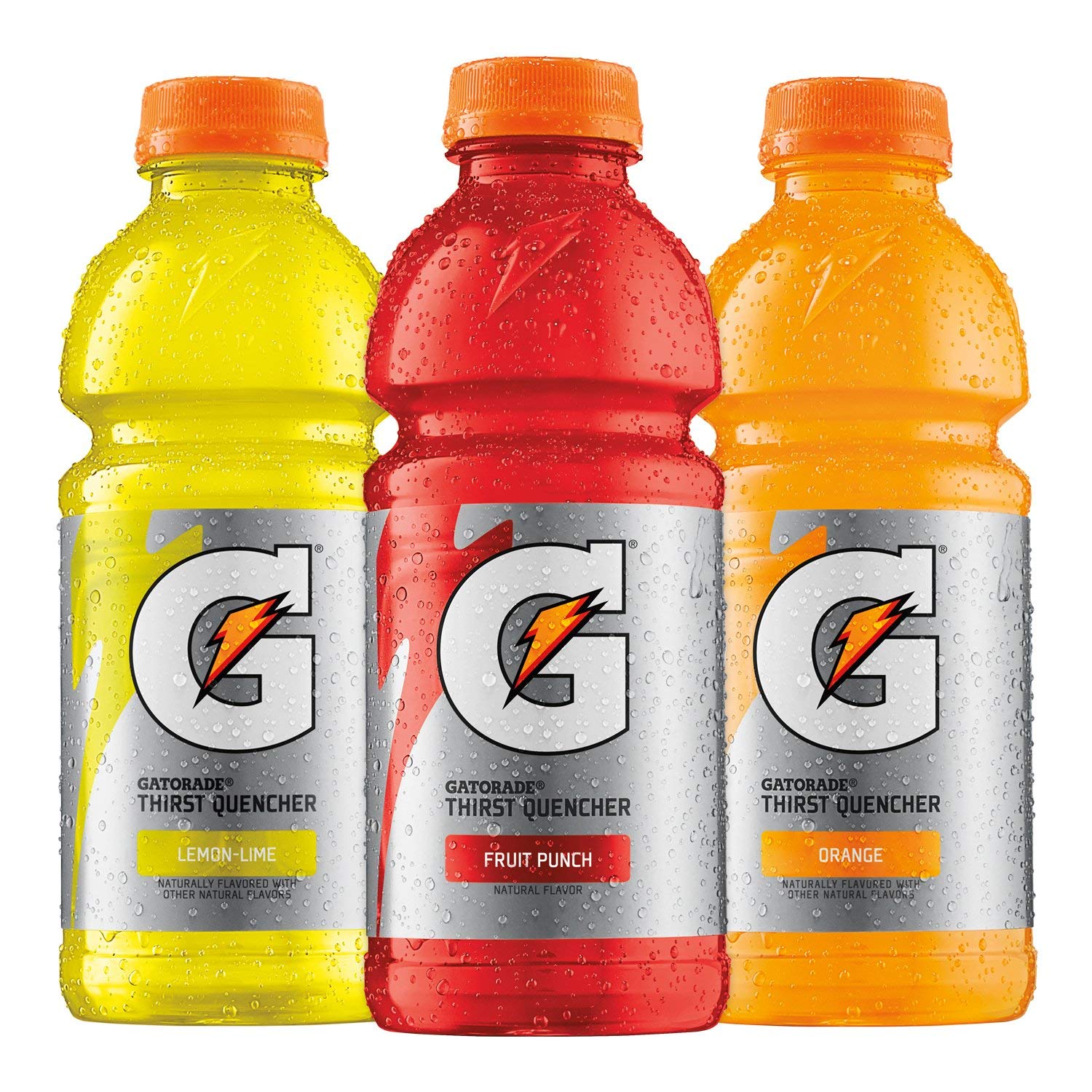 Lemon-Lime, Fruit Punch, and Orange are three of the most prevalent flavors of Gatorade. (Photo courtesy of amazon.com)

Lemon-Lime, Fruit Punch, and Orange are three of the most prevalent flavors of Gatorade.

Ever since Gatorade was created by scientists at the University of Florida for use by its football team, the beverage has become an extremely popular drink among millions of people.

With its popularity, Gatorade has evolved to create dozens of new flavors. From Fruit Punch to Lime Cucumber, Gatorade has created flavors to be enjoyed by all kinds of people. And naturally, people have their preferences when it comes to the different flavors. People have many reasons for why they like the flavors that they do.

“The lighter flavors are better to drink during a game” senior Matt Kentra said when asked about his preference of Gatorade flavors.

I have collected from a survey I took of 134 students the 10 most popular flavors among York students, there are some clear winners.

Cool Blue was, by a landslide, the most popular Gatorade flavor at York, receiving a vote from 47.6 percent of surveyed students. Its sweet flavor and cool aftertaste really makes it a fantastic flavor.

“Cool Blue was the first Gatorade I ever had,” senior Louis Cimino said about the flavor, “and it tastes like Blue Raspberry to me. What’s not to like?”

Receiving a vote from 40.7 percent of surveyed students, Lemon-Lime is the original flavor of Gatorade used by the University of Florida football team back in 1965. Through those fifty-five years, the flavor has truly withstood the test of time, with its great balance of being light, yet still flavorful.

“Gatorade Lemon-Lime is the flavor and drink of champions” junior Brandon Walker said.

Like Lemon-Lime, Fruit Punch is one of the original Gatorade flavors, first debuting in 1983. And like Lemon-Lime Gatorade, it has also stood the test of time, receiving a vote from 39.3 percent of surveyed students. It has all the qualities of a great flavor of Gatorade: Great taste, light enough to drink during heavy activity, but flavorful enough to be enjoyed by all people, and of course, giving that refreshing finish.

“Fruit Punch is an absolute classic,” said an anonymous student.

When it first came out in 1997, the Gatorade Frost line of drinks was meant to really focus on and improve upon the idea of that refreshing, “cool” feeling you get after drinking Gatorade. Glacier Freeze is the poster child of that line, with its cool citrus flavor, and really managed to make the Frost lineup one of Gatorade’s most prominent, as it received a vote from 29.7 percent of surveyed students.

When the Gatorade Fierce lineup, flavors of Gatorade meant to have a stronger flavor and more sugar than others, came out, there were four new flavors released: Fierce Lime, Fierce Melon, Fierce Berry, and Fierce Grape. Out of those flavors, the only flavor that still exists today in the exact same state as when it was first released was Grape, which is truly a testament to its taste.

Grape Gatorade really packs a punch, giving an intense grape flavor with every sip. However, despite having such a strong flavor, it still manages to give that refreshing feeling associated with Gatorade. Grape received a vote from 24.8 percent of surveyed students.

Orange Gatorade is one of the classic flavors. You will rarely find anyone who shows distaste towards Orange Gatorade, and for good reason. It is a solid, refreshing flavor with great taste that anyone will enjoy, and it received a vote from 22.8 percent of students.

“I like Orange,” senior Max Devereaux said. “I grew up drinking these flavors, so when I think of Gatorade those are the first ones that come to mind. The flavors taste more simple and don’t taste over the top which I enjoy.”

Strawberry Lemonade is one of the newer flavors of Gatorade, being released in 2005, and the very experienced team at Gatorade really nailed it with this one. This flavor is able to keep the taste of strawberry lemonade, but manages to really tone down the acidity of the flavor to allow for a smoother finish.

“I love strawberry lemonade because it gets those summer vibes going,” junior Dominick Carillo said.

For a long time, Gatorade had covered a lot of the most prevalent and popular flavors out there. Orange, Lemon-Lime, Fruit Punch, and Grape had all been covered. However, one flavor was notably missing: cherry. That changed, however, when Glacier Cherry was added to the Gatorade Frost lineup. Gatorade took the idea of what they did with Glacier Freeze, a focus on the refreshing feeling you get after drinking Gatorade, and added Cherry to it. The result was the best implementation of cherry in Gatorade to date, giving that cool feeling along with a great taste.

Blue Cherry was a flavor recently added to the Gatorade Fierce lineup, with the intent of being a more flavorful version of the cherry flavor, as opposed to the more refreshing Glacier Cherry, and it did a solid job. The cherry flavor really packs a punch, and although not one of my favorite flavors, definitely allows for a great drinking experience. 13.1 percent of surveyed students voted for this flavor.

Green Apple is another recent addition to the Gatorade Fierce lineup and is one of my personal favorite flavors, and it seems that 10.3 percent of surveyed students agree with me. This seems to be a rather divisive flavor, with some people swearing by it, and some people despising it. The idea of a Green Apple flavor is very interesting, but also hard to implement, but Gatorade really did a fantastic job with it.

“Some flavors just quench my thirst a lot better than others,” said an anonymous student on his Gatorade preferences, “especially the green apple flavor.”

All in all, most Gatorade flavors have very warm receptions due to the consistently high quality of products that Gatorade produces. If a flavor doesn’t make the top 10, it doesn’t mean that it is a “bad” flavor per se, simply that it isn’t within students’ preferences. However, a flavor being on this list is a testament to the high quality and great taste of that flavor.