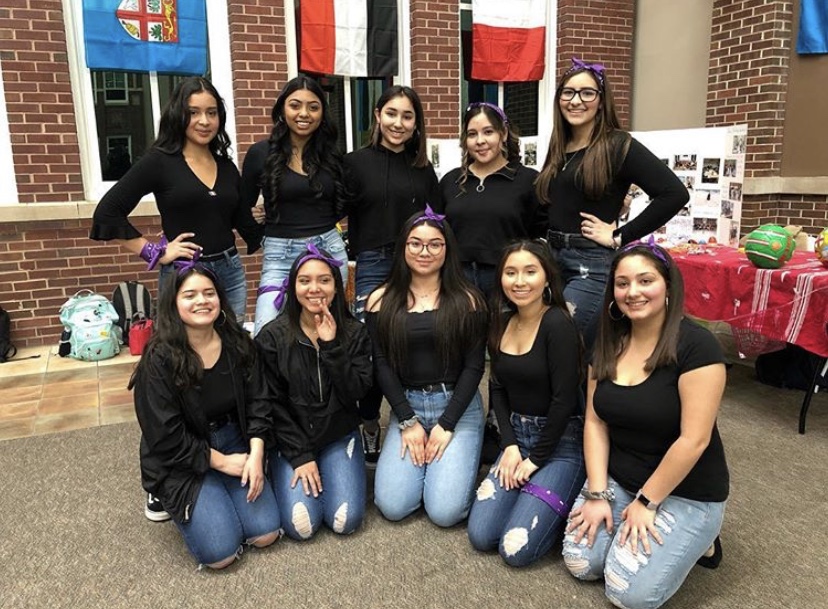 Latina Dreamers pose at the 2019 International Fest that is hosted in the commons during second semester. (Photo courtesy of Latina Dreamers)

Latina Dreamers pose at the 2019 International Fest that is hosted in the commons during second semester.

To some, Sept. 15-Oct. 15 means very little, however, for groups such as Latina Dreamers and Hispanos Unidos, this time is dedicated to who they are and where they come from. Hispanic heritage month is a time for people of Hispanic backgrounds to express their culture.

Many people relate these groups with purely dancing and Hispanic culture, however, Lorenzo Rubio, the sponsor for Hispanos Unidos, and Diane Oliveros-Prymicz, the sponsor for Latina Dreamers, have different goals for the clubs.

“Being able to just promote the unity of young high school students is really important to me,” Oliveros-Prymicz said. “I just want members of Latina Dreamers to know that if you don’t feel apart of something in school, in Latina Dreamers you will.”

Latina Dreamers and Hispanos Unidos have the ultimate goal of building a community within their clubs. Latina Dreamers isn’t just focused on one individual thing.

“Time is committed to college planning, exploring options for higher education, promote Latin culture and be unified as family,” the club page said.

Hispanos Unidos takes part in a variety of activities as well. According to the sponsor, Rubio, the club also helps to promote unity among the members.

“Our three goals are to do community service, have fun and build unity,” Rubio said. “Last year we went to go play laser tag, something that isn’t really tied to any subject you’re learning in school.”

For students, this month is a time for them to embrace their culture together. A misconception about the clubs are that you have to be Hispanic to be apart of them because of their names.

“Heritage month means that I don’t have to be scared of what my background is and who I am,” sophomore and Hispanos Unidos member Genry Lopez said. “[Hispanos Unidos] is important because it’s not just Latinos who can join, we invite different races to come and have fun in our club.”

According to US News and World Report, York’s Hispanic population is roughly 14 percent of the population. This small group of individuals take advantage of the month dedicated to their heritage and celebrate it.

“For [Latina Dreamers], Hispanic Heritage month is super important. We’re such a small percentage of York’s population so this month allows us to share our culture and heritage with York,” junior Latina Dreamers member Juliana Suarez said. “There are so many Hispanic people who are from different countries, [I want people to] take the time to learn at least a little bit about other cultures and why this month is so important.”

“We hope to provide comfort so people can feel like they can be who they are and not worry,” Lopez said.