With the start of fall comes the famous seasonal drink, the Pumpkin Spice Latte (PSL). There have been many debates about which restaurant or cafe has a superior pumpkin-flavored drink, so we set out to answer this question.

We tried and ranked six different lattes in Elmhurst and placed them into three categories: taste, presentation and price. We started with Elijah’s Coffee and moved on to Brewpoint, Starbucks, McDonald’s, Dunkin and finally Gloria Jeans. Here’s our ranking:

We walked into the empty, naturally lit coffee shop at around noon, skeptical of whether they were open because of the vacancy and dim, artificial lighting.  The lone barista was happy to serve us and we placed our order for one PSL.

Presentation: The establishment itself was the epitome of a classic coffee shop: cozy armchairs, wooden tables, and reading materials. The windows surrounding the building allowed for natural light to flood in, reducing the need for electric lights. The cup design was the most elaborate of all the ones we saw; sporting a striped and colorful design. Unfortunately, the cup and environment were the best part of this experience.

Pumpkin Flavor: The pumpkin flavor was virtually nonexistent in our Gloria Jeans Latte; our order tasted similar to a plain black cup of coffee.

Price: The Pumpkin Spice Latte at Gloria Jeans set us back $5.10 for a small cup, making it the most expensive drink of our excursion.

While the presentation at Gloria Jeans was stellar, the price we paid for the latte was unreasonable given the product. If you’re looking for a very bitter version of a PSL Gloria Jeans might be for you, but we’d advise you to save your money. 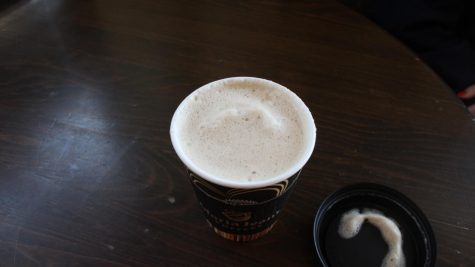 Our second to last stop was Dunkin, a restaurant we are both very familiar with, but did not have high hopes for. The interior was almost empty, but the employees were still busy with the drive-through line. We ordered a $3.70 PSL and the young cashier handed it to us about two minutes later. Unfortunately, the staff made a mistake and gave us an iced latte instead of our desired hot coffee, which might have affected our ranking.

Presentation: As Dunkin is a fast-food chain, the inside was nothing special; although it was relatively clean for such a busy establishment. Under the fluorescent lights, the pink walls and table were a sickly shade. The latte came in a clear plastic cup, showing the extremely pale, milky coffee.

Pumpkin Flavor: The sickly sweet flavor came up the straw all at once as we sipped the syrupy drink. The taste of pumpkin was overwhelming and not well distributed; on the bottom of the latte was pumpkin flavoring, and on the top was overly sugary coffee.

Price: The price was the most redeeming factor of the drink at $3.70, which is the second least expensive drink we tried.

The drink was much too sweet and artificial tasting, but the presentation was bright- most likely due to the absurd amount of creamer. The price, however, is what keeps this drink afloat. If you’re into cheap sugar highs, look no further than Dunkin for your iced PSL this fall. 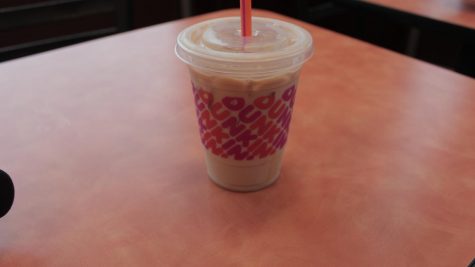 As soon as we walked through the large, industrial-looking door, we were welcomed into a spacious cement room full of small antique tables and colorful overstuffed chairs. We approached the counter and scoured the menu for a PSL; what they had instead was a Salted Pumpkin Brown Sugar Latte.

Presentation: The all-white cup was not very interesting to look at, and the inside was very pale; this lowered our expectations of the pumpkin flavor. Brewpoint itself is a wonderful environment and is very clean and comfortable.

Pumpkin Flavor: The drink had more of a creamy, sugary taste rather than a pumpkin taste, but overall was a great latte. It was not too sweet and had a great consistency, it just wasn’t what we were searching for in pumpkin flavoring. For every adjective pushed into the name of the latte, the plain taste could not back it up. Then we reached the bottom of the cup, and to our dismay, it was just saltwater. It seemed as though all the “salted pumpkin” was not combined properly and created two different drinks in one cup.

Price: For a small-sized coffee, the price at Brewpoint was $4.50; this seemed to be very expensive, especially since the cup was small relative to the other lattes.

This drink did not fully encapsulate the pumpkin taste we were looking for and was much too salty. Besides the taste, the presentation was quite dull and the serving was small. 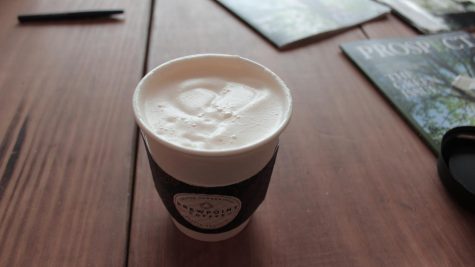 We walked into the newly remodeled McDonald’s on York Road, immediately overwhelmed with the mouthwatering smell of salty french fries. We ordered a small PSL and sat down. We were the only customers in the restaurant on a Sunday afternoon, soon after ordering we heard laughter coming from behind the counter, followed by “who ordered a Pumpkin Spice Latte?” in a sarcastic tone. We kept our heads down as we picked up our order from the counter.

Pumpkin Flavor: The pumpkin flavor was very sweet, but not as overwhelming as the Dunkin disaster.

Presentation: We were big fans of the simple yet drawing bright yellow cup used by McDonald’s. The cup differed from the traditional white cup most other coffee shops used. In addition, the latte itself was a visually pleasing bright orange and brown color. The restaurant itself was relatively clean and looked very modern as it had just been remodeled.

Price: The price was the most impressive factor of the McDonald’s latte as it was the least expensive drink of the day totaling at two dollars.

Although the drink was too sweet, the price was an astonishing bonus to the rating.

Our first visit was to Elijah’s Coffee Shop, whose decor consisted of paintings from District 205 students, comfortable chairs, and a plethora of pillows. The small restaurant gave off the feeling of comfort and autumn but also cooked us alive: the cafe seemed to be kept at 80 degrees.

Pumpkin Flavor: The drink had a distinct pumpkin taste and a very strong coffee flavor countering the sweetness of the pumpkin and giving a near-perfect PSL.

Presentation: The plain white cup and boring cardboard heat protector created a bland visual experience, but the shop was very well decorated due to all of the art it featured.

Price: The drink was $4.10 which is average relative to the other lattes we tasted, but there was a good amount of liquid in the cup.

Elijah’s PSL had the exact flavor we were searching for in the coffee, but the pumpkin flavor could have been a little sweeter and the experience was overall a good one in the small shop.

As we entered the Starbucks, we were welcomed by the familiar black and green interior that is the same in all Starbucks. The restaurant was fairly empty and also very dirty; the tables were covered in crumbs and spilled drinks and men were bringing in giant boxes, cluttering the space.

Pumpkin Flavor: The flavor of pumpkin was very noticeable in the latte, but not overpowering. The sweetness was balanced with the bitter taste of coffee, but not in a gross, syrupy way.

Presentation: The plain white cup with green Starbucks’ logo is simple, but not boring; the cup gives a clean vibe overall.

Price: The latte was not too expensive totaling at $4.25 while also being a good size.

The PSL was simply superior in taste compared to the other five, while also not being too expensive. The drink gave a pumpkin taste perfectly encapsulating fall and checking all the boxes of our expectations. The inside of Starbucks wasn’t as clean as we’d have liked, but the drive-thru option gives redeeming points. 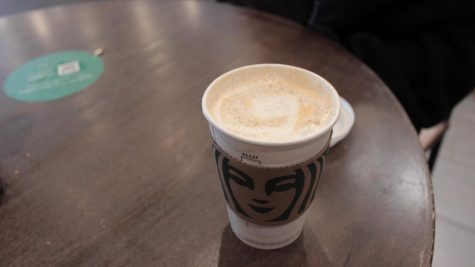