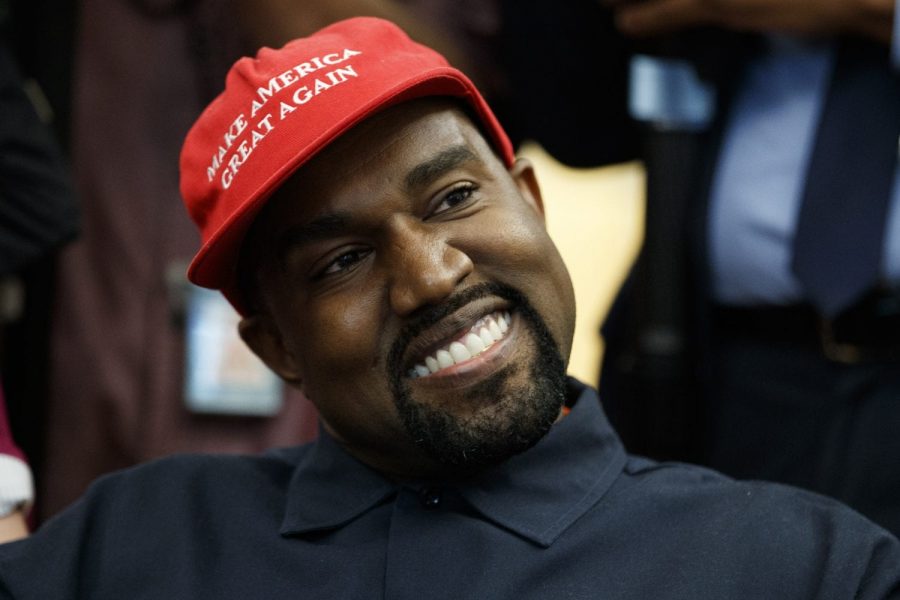 Kanye West’s public support of the President has caused America to ask some serious questions about where their loyalties really lie.

Kanye West and his role on America’s political spectrum

Who is Kanye West? Stripping away the bravado, the unbridled arrogance, the controversy and the music, who is he as a person? He’s in the news so much, I feel like the public knows him. The public has seen him upstaging Taylor Swift at the VMA’s, heard him on the radio saying that he believes himself to be a literal God and we see him ranting in the Oval Office with the President; however, these events misrepresent Kanye. Kanye is one of those celebrities everyone has a different opinion about.

Kanye often comes across as conceited. He has said a lot of unsavory things. There is no shortage of controversial statements from Kanye. On Sept. 2, 2005, on live TV at a Hurricane Katrina relief benefit, Kanye, completely unprompted, said: “George Bush doesn’t care about black people.”

Kanye has also made insensitive claims about Jewish people in politics.

In fairness, evidence that Kanye is a genius is also quite abundant. Kanye has released nine studio albums in his career, and on each one has tackled complex issues like gang violence, mistreatment of the poor, the value of a college education and drug addiction, all to varying levels of success.

This is why it’s important to talk about Kanye now, especially after the release of his new album “Jesus Is King”, released on Oct. 25, 2019. Kanye is an unabashed Republican and supporter of Donald Trump and has recently come out as a born-again Christian. Kanye has repeatedly voiced his support for Trump and has even met with him in the Oval Office to discuss policy and beliefs. Unlike a lot of other celebrities, this is not simply just a declaration of allegiance. And Kanye’s support from the President has been recognized by the Presidential family itself, as on Oct. 29, Donald Trump Jr. tweeted, “Kanye West is cracking the culture code. @kanyewest’s new album #JesusIsKing is the epitome of fearless creativity and ‘dangerous, unapproved’ ideas. Leftists always try to silence those who are speaking the truth. They’re waging a war on our family and culture. Kanye is a pioneer.”

This praise is not as shallow as it may seem, as it shows Kanye West is not just a celebrity, but an influential voice in America today. Kanye himself has begun to resemble Donald Trump before his presidency. Think about it: they are outspoken and controversial millionaires with private lives constantly under scrutiny that purvey a significant amount of consumerist influence. And on the topic of similarities, when it comes to the brand, both Trump and Kanye have names that have superseded who they are. Even if you’ve never heard Kanye’s music, you know the name Kanye West, the same way you knew the name Donald Trump even before he became president. There are not many people that can claim to have as much cultural significance as they do musical significance, but Kanye is one of the few he can. And with Kanye sharing Trump’s ideals, he is a highly publicized voice for a base popularized for their position as the vocal minority.

This is where Kanye’s political influence comes in.

“My father was a Black Panther,” Kanye said in a recent interview with BigBoyTV. “My mother was arrested for the sit-ins at when she was six. They were fighting for us to have the right to our opinion, not the right to vote for whoever the white liberals said black people are supposed to vote for.”

Now regardless of party, people can identify with these words because there is a certain hard truth to it. Kanye, unlike many politicians nowadays, is not pushing an agenda. He is simply trying to get a message out that you do not have to be what society tells you to be. He isn’t motivated by politics, he’s motivated by the belief that conformity for the sake of conformity is wrong, which is something he lives by. As recently as Oct. 24, 2019, Kanye announced that he would be moving the manufacturing of his sneaker line “YEEZY” to the United States, and plans to hire workers through prison reform systems.

Kanye may be doing more for Trump then even he realizes.

Kanye’s new album “Jesus Is King” is, as the title suggests, very spiritually motivated in praising God and his glory. For the most part, it does it very well, combining classic Kanye technique with the gospel elements to make it a fitting sendup to the Creator. The album went to #1 immediately on the charts and sold around 265,000 units in its first week.

Now while this may seem irrelevant at first, one must remember that Trump’s core voter base.  According to a CNN exit poll taken after the 2016 election found that 85 percent of evangelicals or “born-again” Christians voted for the Trump-Pence ticket in 2016. With such influential and well-saturated celebrities like Kanye sending out such a pro-Christian message in his album, it could persuade some of that 15 percent Democratic evangelical demographic to transfer to the Republican vote given Kanye’s support of Trump.

According to a study by Wheaton College, there are around 90-100 million Evangelicals in the United States today. If Kanye even shifts one percent of that vote, that’s around one million votes going red, which could have a huge effect on the election. This would not be an unprecedented incident.

After Oprah endorsed Barack Obama in 2007, not only did his recently released memoir skyrocket to a #1 bestseller, but the University of Maryland found, through the Pew Research Center, that after Winfrey’s endorsement, 23 percent of Democrats said that they would be more likely to vote for Obama before the election. They also found that, because of the country-wide circulation of her magazine, Oprah Magazine, and her endorsement for Obama, Oprah was responsible for around 1.015 million votes for Obama. And given that last election’s popular vote was decided by a little under three million votes, Kanye’s effect on certain audiences could have a tremendous effect on the outcome.

So regardless of opinion on Kanye, what he says matters. As much as some of us would like to believe that some of the crazy things he says will be brushed off by any sensible person, we have to remember that five years ago there was a man, similar to this, who ranted and raved utter lunacy that we all thought would go away; that man is currently the president.