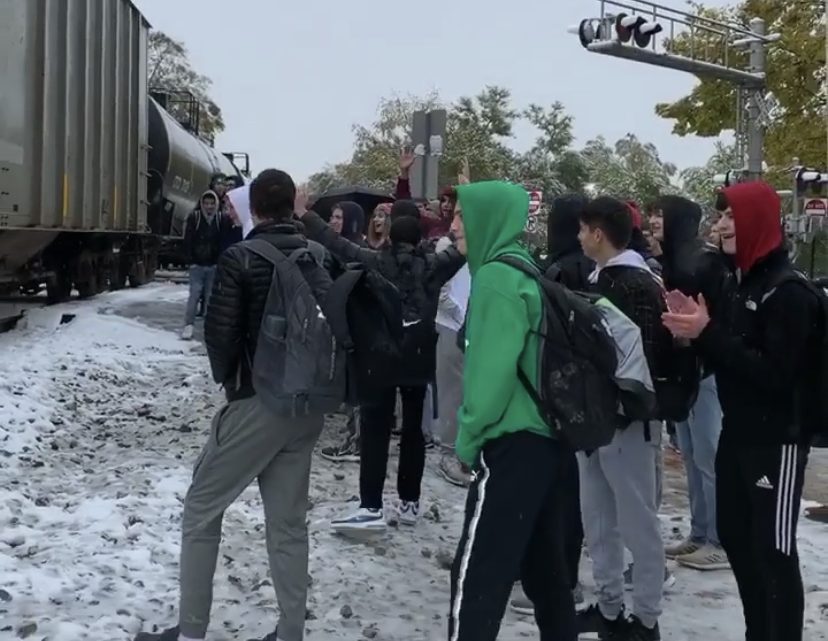 Students celebrate as the train finally clears the track after 40 minutes of waiting. (Photo courtesy of Instagram)

Students celebrate as the train finally clears the track after 40 minutes of waiting.

As students attempted to make their way to school on the morning of Oct. 30, 2019, many encountered a problem that led to stress as many missed their first-period class entirely. The train on the Spring Road tracks went through every combination of reversing, moving forward and eventually stopped on the tracks. Students who took the bus, drove, walked and biked were all exposed to the freezing weather conditions on the late start Wednesday.

“I was scared I was not going to make it to school on time,” freshman Megan Walker said. “I got to math with only like 10 minutes left in the period.”

While Walker was fortunate enough to be in a warm car at the time, a lot of students were not as lucky. Many had other problems such as students who had to walk through the slush and snow only to wait for the train to clear the tracks.

“My feet were cold and I couldn’t feel them and most of my backpack was soaked with my sweatshirt,” junior James Connor said.

The train continued to move forward, then stop and then it reversed. This pattern continued during the 40-minute incident making the vehicles, pedestrians, and bikers more frustrated as time progressed.

As time progressed, the traffic of not only cars and buses, but walkers and bikers began to increase. Cars were backed up to 7/11 and students flooded both sidewalks surrounding Spring. Many students even resorted to the illegal and dangerous act of climbing in between train cars to get to the other side of the tracks.

“It was kinda crazy because there were about 30 kids standing right next to the train and the cars on St. Charles were extremely backed up,” freshman Gavin Connolly said. “After about 40 minutes the train moved on and we were able to cross the train tracks.”

The backup lessened as cars left to find other routes to the school such as the underpass. Other railroad tracks and construction caused students to make multiple detours only to wait even longer once they arrived at the stopped train. When the train cleared around 9:50 am (25 minutes after school started) a flood of students continued their trek to school.

“I had to go through the detour route because the West avenue train was closed and I had to go around which created more frustration because everyone was in a rush and nobody was patient,” junior Markus Slowinski said. “I got stuck at the next set of tracks and couldn’t get across. Then I waited for like 30 minutes because the train was not moving at all.”