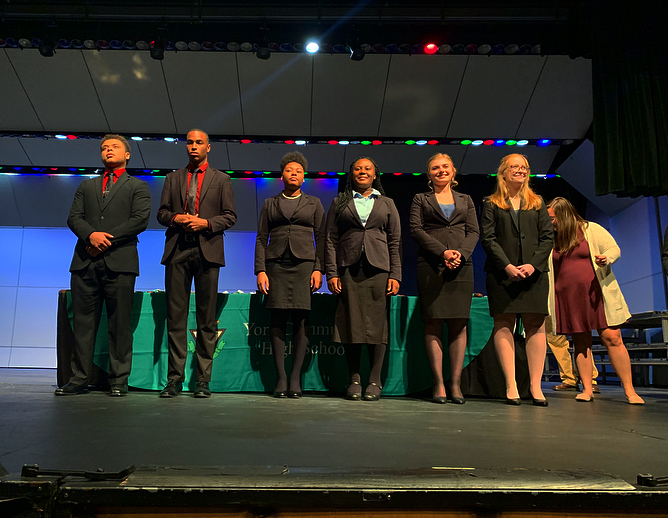 The finalists for varsity Dramatic Duet Acting wait for their results. Senior Emily Walker and Junior Olivia Rosenburg took third for their piece “The Children’s Hour”. (Photo by Lucy Valeski)

The finalists for varsity Dramatic Duet Acting wait for their results. Senior Emily Walker and Junior Olivia Rosenburg took third for their piece “The Children’s Hour”.

This past weekend, York Speech team hosted 18 different schools for their first speech tournament. “York’s Royal Court Invitational” was the first tournament of a long season for the varsity members of the speech team.

Students involved in speech compete every Saturday from the first weekend in November all the way until the state tournament the third weekend in February. Dressed in their best business suits, the team members compete in fourteen different events ranging from dramatic interpretation to informative speaking  original comedy.

It had been Head Coach Kevin Martin’s objective and goal to host a speech tournament at York for the past couple of years. Hosting a tournament involves extra time and effort on the part of coaches, students and parents.

“It takes weeks to plan and prepare to host a tournament,” Martin said. “First, we have to meet with the administration to get a date on the calendar. Then, I’ve created a checklist of tasks that have to be accomplished. Speechwire has to schedule the tournament. Ballots, maps and schedules have to be xeroxed.”

Speech members spent the Friday night before the big tournament preparing. They posted event signs on every door, printed critique sheets, organized concessions and obtained trophies and medals. However, the hard work paid off by giving the team a unique advantage.

“It was really nice being able to find my way around  and not have to wander around looking for my room for thirty minutes,” junior Heidi Ward said. “I just had more time to chill and help other people find their rooms.”

York Speech board member junior Emma Taylor also expressed a sense of pride and excitement at hosting a tournament.

“Hosting a tournament is a home-field advantage. “It is also just a really great feeling walking around and seeing these people from other schools when you get to share your school with them and it is a new experience that I am glad York has been able to have.”

Though the York team was not allowed to win their own tournament (Hinsdale Central took home the first place trophy), the individual competitors found success in their events during the award ceremony. Between the varsity and novice teams, 29 students placed in the final rounds and  students placed first.

Kicking off their season with “York’s Royal Court Invitational” boosted morale and set the precedent for a successful and eventful year to come for the speech team.

“Hosting our own speech tournament for the first time creates an awesome opportunity to make speech a more prominent community at York, create a sense of leadership for the older members of our team and get everyone super excited about the season ahead,” junior Charlie Kungl said. “Speech is a great activity, and it’s amazing that is can be even closer to home.”