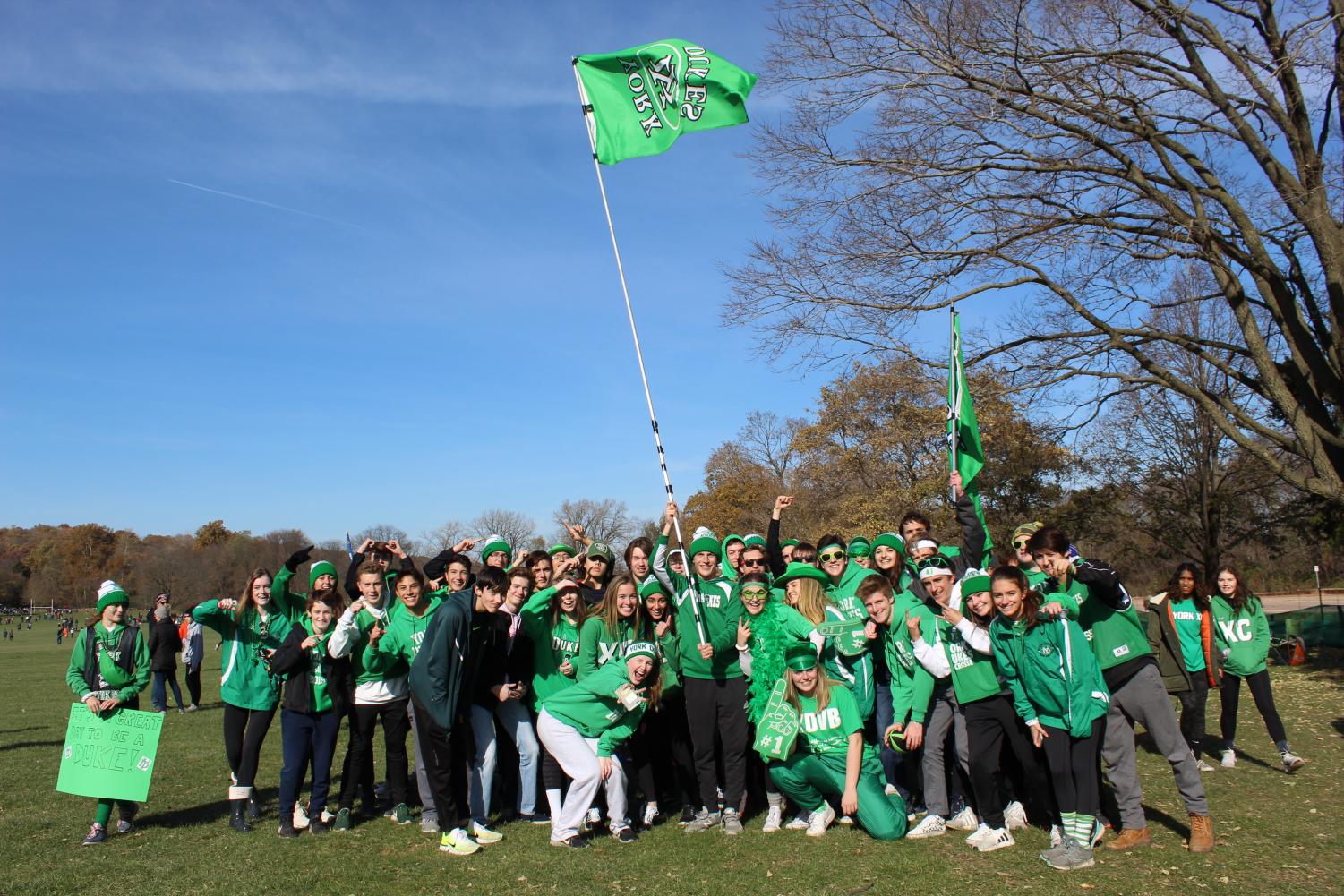 The Illinois state cross country meet hosted at Detweiller Park in Peoria, IL was an unforgettable day for the Dukes. Over 250 fans made the trip down to cheer on the boys and girls teams running in the meet. Like the weeks prior, to “hype up” the fans, seniors Steve Chornij, Jensen Redick, Kameron Stearns and Will Ahern hosted a student tailgate that drew in the largest crowd yet. Fans sported their kelly green Duke attire while socializing, barbequing, eating food, playing bags and making posters for the runners. Undeniably York had the largest fan section at the meet and the “sea of green” could be spotted from across the park. 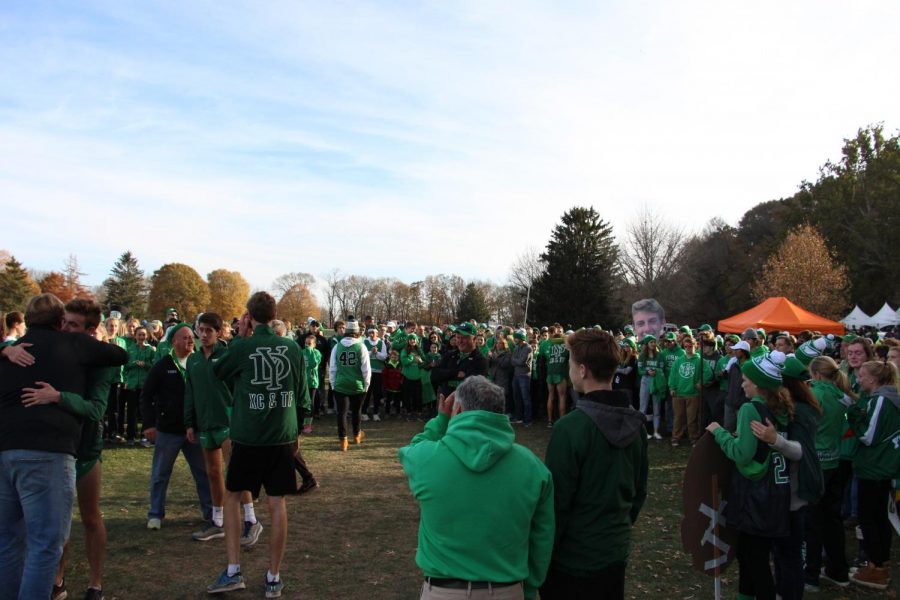 Gallery|37 Photos
Photo By Jack Borchers
All of the York fans gather together to listen to cheer on the boy's team and listen to Coach Kern's speech. November 9, 2019.

The boys fought an incredulous feat after being trapped in a sea of runners as they attempted to maneuver out of their box in the middle. Starting out caught in the pack resulted in the boys needing to do more catching up with competitors throughout the race. The boys did not let this set them back and began picking runners off one by one. Senior Daniel Klysh ran a speedy time of 14:34.74 placing 10th and earning the all-state title. Following Klysh were senior Michael Moriarty with a time of 15:00.46 (45th), senior Brian Pratt with a 15:02.27 (46th), junior Colin Hill (51st), senior Ethan Kern (53rd), senior Max Lupo (88th), and senior Will Yasdick (111th). In the end, the Dukes placed third with a score of 153 points, receiving a trophy and being recognized for their outstanding performances at the award ceremony. 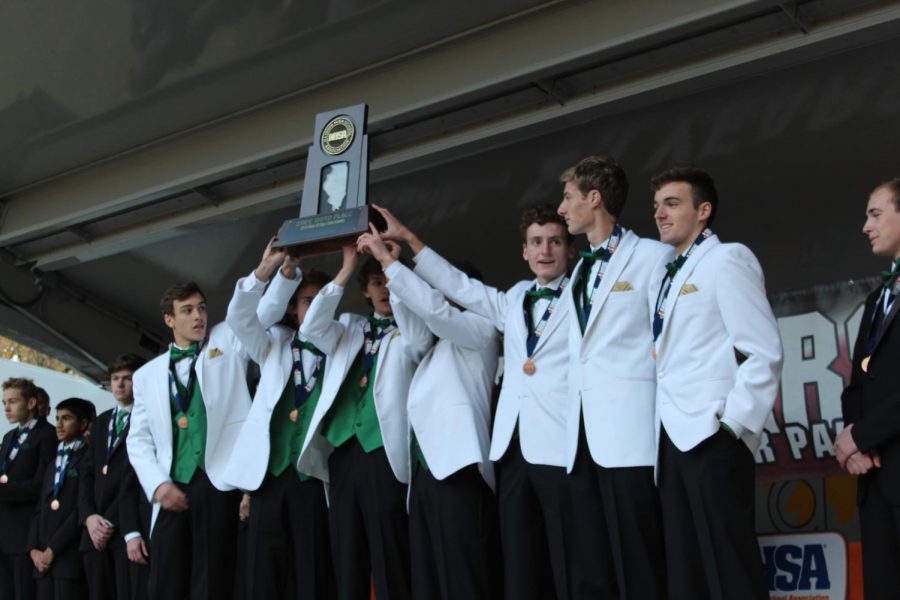 The girls went out strong and stayed as a strong pack for a good portion of the race. Freshman Brooke Berger pulled away from the pack of senior Lydia Hickey, freshman Bria Bennis and sophomore Katelyn Winton. The girls stuck together and helped to push one another. In the end, freshman Brooke Berger placed 67th with a time of 18:02.51. Following Berger was sophomore Katelyn Winton running an 18:19.48 (96th), freshman Bria Bennis an 18:23.62 (107th), sophomore Bella Swanson (108th), senior Lydia Hickey (112th), sophomore Kathleen Buhrfiend (125th) and freshman Maureen Buhrfiend (152nd.) In the end, the girl’s placed 18th with a score of 387 points. 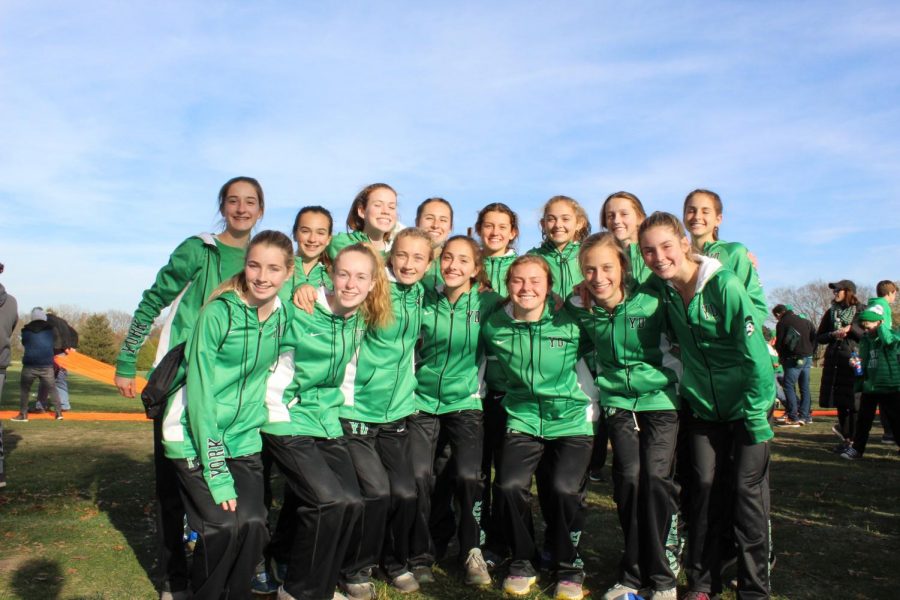 Gallery|36 Photos
Photo by Grace Moriarty
The girls' teams top 15 runners get together after the varsity race to celebrate the end of their season together. November 9, 2019.