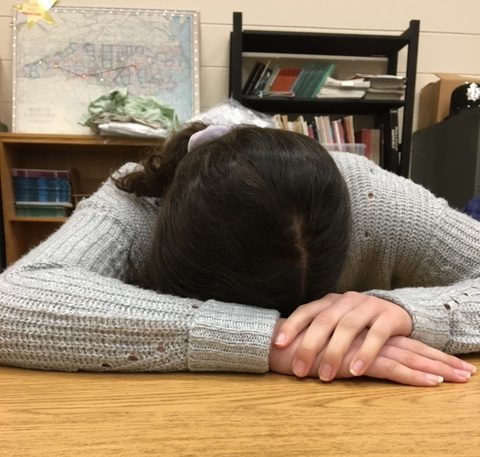 All over campus, students walk through the halls like sleep-deprived zombies, slowly shuffling to their first-period class. How can students widen their minds, when their eyes struggle to stay open? Will pushing back school hours solve this zombie apocalypse?

Beginning last year, the district has been considering implementing a later start time as well as weighing the benefits and repercussions.

“The medical community recommends that the high school day start no earlier than 8:30 a.m.,” Superintendent Dr. David Moyer said. “The State of California has passed a law prohibiting high schools from starting earlier than that. Several area high schools, including Barrington and Stevenson, have already implemented later starts for high schools.”

The District is not only considering this later start rule simply because of surrounding schools’ influences, but they are also paying close attention to the mental health of our student body.

“There has been an increase in the percentages of students who are experiencing high levels of stress and anxiety at all grade levels,” Moyer said. “It’s clear that this is one step that can be taken to help. It is no longer a question of, ‘if’ but rather, ‘how.’

While many students lose sleep over homework-overload, a contributing factor to stress and anxiety, many also participate in a multitude of after school activities.

“I am involved in a number of extracurricular activities that limit the amount of sleep I get each night, including tennis, piano, working (babysitting and dog walking) and clubs after school such as Best Buddies,” sophomore Erin Lindgren said. “I go before school many days for Key Club and Interact Club as well. I believe that school starting later will benefit stress and anxiety because our bodies would have more time to recharge and recover from the day.”

In an anonymous survey, 78% of 157 students said that their education would improve if school were to begin at 8:30 a.m.; however, the remaining percentage voiced concerns about the final bell getting delayed an hour as well.

“I would love to be able to wake up later and get enough rest,” junior Mustafa Valika said. “My only reservation would be the limitation of after school athletics and activities due to time constraints.”

Would the delaying of the school start time have an effect on our 3:06 p.m. end time? While there is a specific committee dedicated to the logistics, this remains an unclear detail to the student body. Nevertheless, this is not the only complication in this developing plan.

“The reason that this is such a complicated issue is because it would have a significant impact on all aspects of the D205 community,” Moyer said. “There are contractual issues with the negotiated agreement with teachers, busing, school schedules, extracurriculars, the fact that a change at York would affect all grade levels, childcare, and all auxiliary partnerships and community organizations, such as the Park District, employers, and youth sports groups.”

While the specifics of this proposal are being sorted, by the committee as well as the District 205 as a whole, the administration hopes the 2021-22 school year will be the soonest year in which this plan can be put into action. Currently, the finer details are not set in stone, yet the District’s mission statement is clear as day.

“I hope people will share my opinion that an ideal world is one in which our greatest asset, our children, are happy and healthy,” Moyer said. “The time has come for all of us to re-examine our values.”